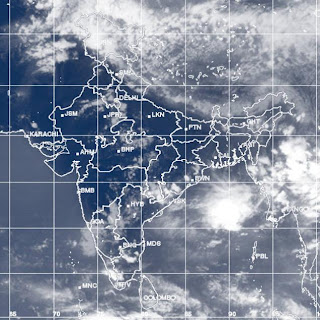 Thiruvananthapuram, May 21: The south-west monsoon has missed its date of onset over Andaman Sea, the first port of call in the Indian territorial waters.

The normal timeline for the onset here is May 15 to 20; this passed on Sunday. On Monday, the India Meteorological Department (IMD) extended the onset window to ‘next three to four days.'

The IMD said conditions are becoming favourable for advance of monsoon over Andaman Sea and adjoining southeast Bay of Bengal during next 3-4 days.

The European Centre for Medium-Range Forecasts suggested that the winds might start to pick up speed by Tuesday ahead of the onset of the Bay branch of monsoon.

This, however, may not necessarily mean that the onset of the Arabian Sea branch would be delayed by as many days.

In the normal course, the monsoon would take a fortnight or so from here to make it to the Kerala coast for precipitating the onset over mainland.

In between, the seasonal weather phenomenon bursts forth over Sri Lanka, just to the south of the peninsular tip. From here, it takes five more days to hit Kerala.

Varying models have pointed to the unfavourable upper-level conditions around the southern peninsula that could inhibit a timely onset.

But others have suggested that this may not take too long, and that the onset could happen well within the first week of June. The IMD satellite pictures showed convective (rain-bearing) clouds over parts of Kerala, north, central and south-east Bay of Bengal, Comorin area and south-east Arabian Sea.

An outlook for the next two days said that rain or thundershowers would occur at a few places over Andaman and Nicobar Islands and increase thereafter.

An extended outlook valid until Saturday said that rain or thundershowers would expand coverage to many places over Andaman and Nicobar Islands.

Significantly, this would also be the time when the plains of north-west India would likely witness delayed development of heat wave conditions.

In fact, model predictions said north-west and adjoining central India getting sizzling hot as the first wave of monsoon rains break out over the southern peninsula.


Posted by Rajan Alexander at 8:23 PM