WWF shoot themselves on the foot: Living Planet Report claims only Global Poverty can save Planet 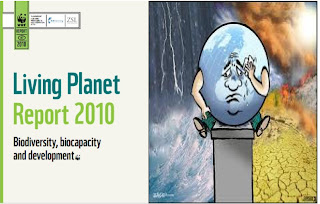 At a time when the World Wildlife Fund, known now as simply WWF, is being increasingly isolated by the Green movement; rocked by internal financial scams and facing dwindling donations that in turn is creating increasing budgetary deficits; the organization in their new report say that only global poverty can save the planet. This is report is their policy document, Living Planet Report for 2012, prepared for the Rio-20 “Sustainability” Summit!

This is a virtual call to turn back on human advancement. If anyone wants to return to nature then they should simply just re-locate to make a living in Haiti where a massive earthquake turned them back to nature. Haiti is an ideal place where the struggle against poverty can be only truly experienced through hands-on living in the island instead of working in the plush air-conditioned offices of WWF and their kind!

But wait a minute. “Save the World” from precisely just what? Global Warming now called Climate Change they tell us. And what is the basis of their alarmism? They quote the reports of the UN-Intergovernmental Panel on Climate Change (IPCC). And what do these reports say?

“The climate system is a coupled non-linear chaotic system, and therefore the long- term prediction of future climate states is not possible.”

Their hue and cry is accordingly based on mere computer simulations based on sets of assumptions, now being more and more falsified by real world evidence. So WWF and their kind are now calling for “Global Poverty” as a solution for an imaginary problem the world they say is facing. This call is however not surprising as it comes from WWF who at the core of their doctrine is a hatred of man, driven by a collectivist revulsion towards capitalism. Coal- and oil-fuelled industrial progress is seen as the bane of Mother Earth, the despoiler of the environment. Seldom is any thought given to mankind’s epochal struggle to tame nature, to bring some measure of comfort to everyday existence.

The call also comes from one of the wealthiest of environmental organizations whose salary scales are designed to compete with top corporates! WWF works in 100 countries and is supported by 1.2 million members in the United States and close to 5 million globally. Renowned researcher, Donna Laframboise gives us a more graphic visual of its economic might:

“According to its 2010 annual report, the WWF’s international network had operating revenues of €524,963,000. Converted to US dollars, that’s just shy of three-quarters of a billion. In one year...

In other words, the WWF is an obscenely wealthy organization. And money, as they say, talks. When one is in the lobbying business and cash is abundant, one treats one’s friends very well, indeed. Nice meals, nice hotel rooms, trips to exotic locales – and heaven only know what else. " 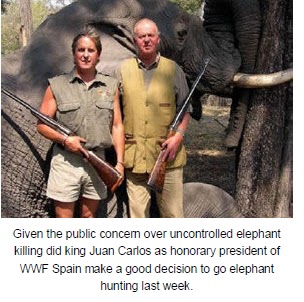 However, contrary to popular perception, wildlife conservation is hardly an issue dear to their heart and this reason why they decided just WWF will do for a name. Conservation was always just a pretext to roll their cash registers. For example WWF was among other conservation groups calling for tougher action against illegal poaching in Africa as elephants herds across Africa are getting decimated for the ivory trade. But just last month, the Honorary President of World Wildlife Fund Spain – King Juan Carlos I – went on an elephant hunt in Botswana. His trip caused fury across Spain not only because of its expensive cost at a time of extreme austerity in the country but also since he is the head of the WWF locally and his action is not setting a very good example for conservationists who are trying to save the elephant. Instead of restraining WWF leaders like King Carlos and Prince Philip from shooting wild animals, the WFF blames over-consumption for the decline in their population.

This is the reason why all you get for their “adopt an animal” scheme is a stuff toy with a certificate of “adoption” and no more. How exactly does flooding the world with stuffed animals help to save the orang-utans, pandas or polar bears help the cause of nature conservation God knows how? But apparently there are 5 million suckers in this world that think so and have taken membership to WWF! This is an absolutely shameless set of guys we are talking of - Marketing of useless consumer products in the supposed aim of a noble idea, while pandering to populist posturing over orang-utans, pandas and polar bears to generate income to fund $70,000 plus average salaries and $470,000 for their CEOs, while claiming to care for nature conservation and demanding Saving the Planet can only be accomplished by creating Global Poverty.

So in their new report, all pretence is given up and the real agenda of WWF and the likes are now openly flaunted. They want to impoverish humanity while accumulating all the wealth in a group of global elites, they being one of them. Very few people seem aware that WWF is a proxy entity founded by, and remains firmly in the control of, about a hundred very rich families. Their policies are the political handiwork of certain reactionary plutocrats whose contempt for the masses, and whose archconservative and ultra-imperialist agendas, can best be defined as fascist.

According to WWF’s own claims, they have only 5 million members in a planet of over 6 billion people.  Even if this claim is taken at face value, WWF’s people base comes to less than 0.07% of the world’s population - a drop in the ocean and yet, they want their policy thrust down the throats of the over 6 billion people in this planet. This is why they are a fascist movement.

The UK publication The Register warns us that WWF is proposing is much worse for humanity:

“Even this grim poverty-stricken dystopia, though, is not the biggest of the WWF demands. The real biggy is that by the year 2050 all energy is to be supplied in the form of renewables-generated electricity, that is by means of windfarms, solar plants, tidal barriers and so forth...

For almost all of human history and prehistory we have burned things to generate energy - it is one of the things that makes us human - but now, within a single generation, that is to almost completely stop. After a million years, the fires will go out.”

So WWF policy document goes on to advocate that all the human race's energy should be produced as renewable electricity within 38 years from now. What’s more, these wind farms, solar plants and tidal power structures should be constructed without any concrete or steel or iron or copper or glass. Do they have any model to demonstrate that this could be indeed done they do not tell nor have the Windsor family’s windmill project gives us a clue how this could be done.

Energy firms have been given the green light for 45 windmills on Crown Estate land, which will rake in £1million a year in subsidies. Those who will live next door to the wind farms in Wales and Lincolnshire accuse the Royal Family of hypocrisy, after the Prince of Wales described them as a ‘horrendous blot on the landscape’ while his father called them ‘useless’ and ‘a disgrace’. Both Prince Philip and his son are the ruling hierarchy of WFF and notice their double speak. What is ‘useless’ and ‘a disgrace’ is exactly what WWF wants to thrust down the throat of global citizens.

According to a Daily Mail article:   “Michael King, chairman of Billingborough parish council, said turbines would be 700 yards from homes. ‘This is very hypocritical,’ he said. ‘There’s real resentment here and people have written letters to Prince Charles. He doesn’t have it on his doorstep.”

But hypocrisy is the hallmark of WWF’s organizational culture. Take the example of Gitte Seeberg, secretary general of WWF Denmark who wormed her way up the WWF hierarchy by displaying her “extra-ordinary’ drive to protect seals. And yet, she dons a seal fur in the form of a coat to drive home her “enthusiasm” for the cause.

We can go on and on with examples but one which is the height is their policy position on aviation fuel. They cite the IPCC WG III Report, 2007: Aviation is one of the fastest-growing sources of greenhouse gas emissions – rising 3-4% per year .Yet WWF conducts Exclusive 5 Star Junkets for the Rich and Powerful. As their advertisement goes:

"This is a 25-day journey by luxury private jet to conservation areas on four continents. Using WWF’s own carbon calculator, the trip in the lavishly fitted Boeing 757 will burn about 100,000 gallons of jet fuel, producing 1,231 tons of CO2, the equivalent of putting 1,560 SUVs on the road over the same period. The trip in 2008 cost $64,950 Setting off from Orlando, Florida, travellers will “touch down in some of the most astonishing places on the planet to see the top wildlife, including gorillas, orangutans, rhinos, lemurs and toucans. Explore natural and cultural treasures in remote areas of South America, the South Pacific, Southeast Asia and Africa. To reach these remote corners, travel on a specially outfitted private jet that carries 88 passengers.” 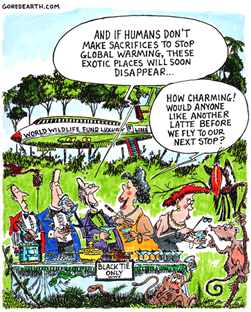 “But during the WWF’s posh excursion, travellers will produce 14 tons of CO2 per person. That’s 71% of the average American carbon footprint and 360% of the average global footprint in a mere three-and-one-half weeks,” writes publisher Steven Milloy. “But who’s counting – especially when you’re in ‘19 rows of spacious leather seats with full ergonomic support’ enjoying ‘gourmet meals, chilled champagne [and] your own chef’?”

And yet WWF joined other environmental NGO chorus in calling for tough restraints on aviation when it joins the EU Emissions Trading Scheme, which included applying a two-times multiplier on aviation CO2 emissions because of the sector’s greater climate impact. Using that assumption, the true cost should work out at $88,000.

“Today's WWF is not really about tigers and dolphins any more, though they make excellent figureheads for fundraising. Just to show how much they aren't, in fact, in step with everyone else, the organisation's activists would be very happy if the present desperate efforts to end global recession were to fail”

To read the full critique of WWF’s Call for Global Poverty, click here: