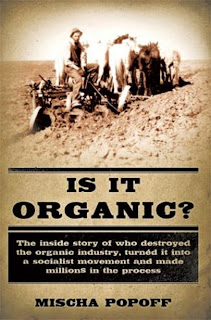 This article below this introduction is written by Mischa Popoff, an IOIA Advanced Organic Inspector and is the author of the best selling book Is it Organic?  who observed"

'I will continue to believe what I saw with my own eyes while carrying out over 500 organic farm inspections: that organic yields are closer to half what conventional and biotech yields are'

Yields are an important variable to consider when assessing different farming systems. In the end, whatever one's objections against conventional agriculture, it has to be acknowledged that its high yields have spared land for nature (known as the land sparring effect) and have improved the food situation of many people. Growing more per acre leaves more land for nature. The alternative is to chop down rainforests so that we may dine on organic vegetables or fruits. Accordingly, the claims of conventional agriculture as a "Green" technology rest on a solid foundation and that of organic exposed as of pseudo environmentalism.

If India has been maintaining a healthy agricultural growth rate in recent years, twice its population growth rate and thereby avoid the Malthusian trap, it is because of significant productivity increases are contributed by the Eastern region of the country, states like Assam and West Bengal, where the government launched a second Green Revolution who were by and large untouched by the first. If one wants to see the contrasting productivity offered by organic farming all we need to do is visit one of our North Eastern states like Mizoram whose agriculture is still almost completely organic, whose economy will completely collapse if unable to import subsidized food from the mainland. 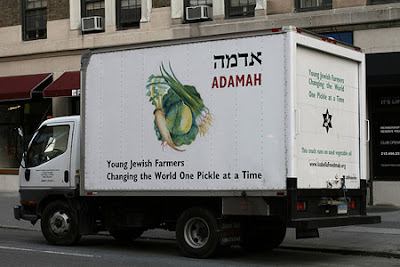 One of the dirty secrets of “organic farming” is that “it’s big business.” The industry has come to be dominated by large corporations that are normally the dreaded bogeymen in the minds of many organic consumers. Besides, "organic" farming is often far from organic, with suppliers using high yielding seeds, pesticides and other chemicals and fooling consumers they are 100% chemical free and of non-hybrid seeds to pay a premium for it. The main problem is related to the bodies that approve the logos, for organic or fair trade foods. Its an open secret that the industry is characterised by widespread bribery and shadowy business deals. Farmers and indigenous people are being lied to, promised the earth and stolen from. This then becomes another form of slavery and economic exploitation. Despite how it may look from afar, the system meant to ensure ethical standards and ecological well-being can deal small farmers out from the start. It is refreshing that Popoff being a veteran of the organic certification industry decided to tell it all.

Many of these tales are tragic and shameless as they are inter-mediated by NGOs who claim their are "rights" based organizations. Despite what is on the label, the Fair Trade status binds these growers to a single processor and trader because the cost of certification is so high. And its through revenues earned by certification that significantly offset the food import bill of organic food products in western countries like Germany, Holland and the UK. Land that could otherwise be used to feed local people is diverted to feed the already surplus agriculture population of the Western countries. The added supply reduce food costs in western countries and the reduced supply in developing countries increase food costs within their own countries, increasing hunger. Organic farming therefore is not only friends of population control, but also enemies of environmental conservation.

WWF in their new report on “Sustainable Development” prepared specially for Rio-20 Summit, have advocated Only Global Poverty Can Save the World. We have already seen evidence of how this fanatical eco-fascist policies implemented the world over has been successful in not only widening the gap between the rich and the poor but also in succeeding in forcing the global economy to a grinding halt. By simultaneously not allowing further agriculture expansion and reducing agricultural yields through the advocacy of adopting organic farming; this becomes a call for creating more hunger in this world. Africa offers a living testimony of such destructive aid policies.  And these foreign funded NGOs now want to replicate the African experience in countries like India.

Not only are global citizens unable to afford food but more and more cannot afford the cost of energy, and the escalating costs of energy due to their obsession to promote renewable energy are in turn driving up prices of all commodities; goods and services. The share of food items  and energy in the overall disposable income of people have escalated so high that it leaves them with nothing else to spend for, increasing incidence of indebtedness.

Yesterday the government of India raised petrol prices by over Rs 7 all over the country, the steepest one time ever increase. This they did so as our economy has lost its near double digit momentum growth and as a result the Rupee getting devalued with development whether power, industrial; mining; roads and other infrastructural and economic projects stalled on one pretext or other by NGOs who were financed by western governments. If these nefarious activities of NGOs have suddenly subsided, at least overtly, then it is because over 130 NGOs have found their foreign funding licenses cancelled or suspended with their bank accounts frozen. The government should do well by turning the screws on another 100-200 such NGOs to drive in the message - behave or face extinction. 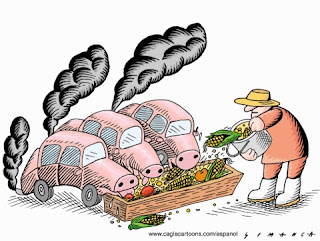 As these NGOs become more and more blatantly anti-people, they increase more and more their pretense to speak on behalf of the poor as their self appointed representatives but accountable to none except their foreign donors. Their people base is a myth; a fact all insiders within the NGO sector knows about. They can only conjure crowds by transporting people, paying them daily allowance, providing food and alcohol on a daily basis or bribing them with project benefits. Once their foreign funds dry up, their “crowd pulling” capacity instantly disappears as well. The anti-nuclear Kudunkulam agitation offers a typical case study how NGO crowds disappeared and their “movement”  fizzled out when their foreign funds were cut off.

Climate Smart Agriculture (CSA), an integral element of their ideological perversion of hatred against all humanity particularly the developing economies, promotes the adoption of organic farming,  packaged ironically as a solution to increase yields when it can only reduce them, accentuating hunger. NGOs like Oxfam, ChristianAid, ActionAid and their likes shamelessly make money both ways - creating hunger and giving relief to hunger. This is in addition of many of them getting large amounts of funding from the organic farming input and renewable energy industry. Here’s Popoff’s article telling you what a rip off CSA is for the poor and hungry in this world. 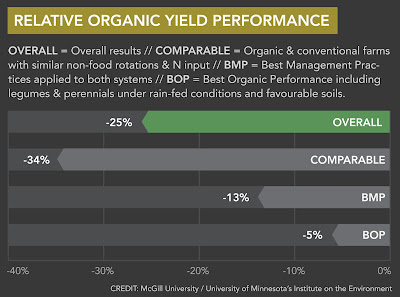 A study reported in the journal Nature shows it's time to put the thirty years' war between organic and conventional agriculture behind us.

Just like the real Thirty Years' War (1618–1648) in which Catholics fought Protestants on ecclesiastical grounds, the organic-versus-conventional war has been an entirely pointless undertaking.

A handful of organic activists have made outlandish claims against conventional and biotech food, giving consumers the false impression that paying double or more for organic groceries is the only way to feed your family safely. Meanwhile, the majority of salt-of-the-earth organic farmers have ignored the battle, appreciating that it's not their place to “beat” their neighbours, but rather to simply offer an alternative to consumers.

The report − “Comparing the yields of organic and conventional agriculture” by Verena Seufert, Navin Ramankutty and Jonathan Foley − indicates that organic crops yield 25 percent less overall than conventional crops. But speaking as an organic inspector, I must report, regrettably, that things are actually a lot worse for the organic activist mob.

First of all, the study does not account for residual, synthetic fertilizer in organic fields. Second, and of far greater significance, the authors fail to consider that isolated organic fields benefit from all the pest-protection being carried out by neighboring farmers, which makes it difficult if not impossible for insects, bacteria and fungi to even reach organic fields.

But of greatest significance is the issue of fraud. If only a few organic farmers were cheating, the results of this study might be accurate. If, however, just 20 percent of organic farmers cheat by using synthetic ammonium nitrate, thereby doubling or tripling their yields, then this handful of charlatans could easily rival the combined production of the rest of the organic industry!

I communicated with Seufert and Ramankutty right after their study came out. Seufert insists that fraud could not possibly have influenced her results because she relied “on data from experimental stations of research institutes where the management practices were controlled thoroughly.” Fair enough.

But, in the same breath she admits, “We also included data from farm surveys,” and this, I pointed out, is where fraud would most certainly have an impact on her results.

Naturally, she insists that “management practices were strictly controlled and all inputs documented,” but this brings us to the crux of the single biggest challenge facing organic agriculture: You can document all you want, but it does not guarantee compliance. Bernie Madoff proved that.

Since organic certification in the United States and Canada is all done on paper without any field testing, one could very well ask whether side-by-side comparisons of this sort can even be done. Still, it's a long-overdue study thoroughly debunking claims by organic activists that organic yields can equal or exceed conventional yields,[ii] a patently absurd notion.

It's not that the authors of the Nature article deliberately overlooked the issues discussed here. Most people simply aren't aware of the complete lack of field testing in the multi-billion-dollar organic biz. So, no one should be upset if the results of this study are taken with a grain of salt.

In the meantime I will continue to believe what I saw with my own eyes while carrying out over 500 organic farm inspections: that organic yields are closer to half what conventional and biotech yields are, which is perfectly fine because, after all, organic agriculture is all about quality, not quantity.

This brings us full circle to the inescapable upshot of this study: organic farming is most certainly NOT part of the solution to feeding the world. It remains a perfectly valid, alternative food-production system for those willing to pay more for quality, hopefully in the form of purity and nutrition. But we need to start guaranteeing that organic food is genuinely organic each and every time. Otherwise, consumers will continue to be duped by a phony political agenda.

Mischa Popoff is an IOIA Advanced Organic Inspector and is the author of Is it Organic? which you can preview at www.isitorganic.ca.

Related posts are given below. Please click link to read:

Has Oxfam finally seen the Light? Yields of Organic Agriculture are too low for solving problems of global hunger??
http://devconsultancygroup.blogspot.in/2012/05/has-oxfam-finally-seen-light-yields-of.html

Posted by Rajan Alexander at 2:31 PM