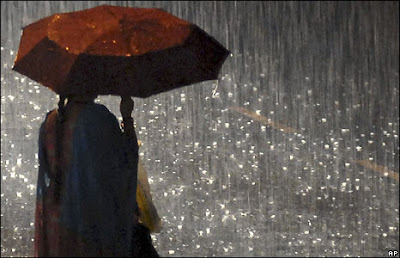 India’s monsoon rains are expected to arrive nearly on time, a former government forecaster said on Wednesday, adding to hopes of another drought-free year which would enable the major crop producer to continue its liberal export policy. Monsoon rains usually arrive around June 1 over the south coast, and P.V. Joseph, now professor emeritus in the atmospheric science department at Cochin University of Science and Technology in Kerala, said they could arrive on that date, give or take three days - a timeframe considered to be normal.

The rains, vital for farm output and economic growth, irrigate about 60 percent of Indias farmland. Farming accounts for about 15 percent of the nearly $2 trillion economy. India is the world’s second-biggest producer of rice, wheat, sugar and cotton and also one of the largest consumers, with a population of about 1.2 billion.

'The monsoon rains are expected to hit the Kerala coast three days before the normal date,' said Joseph, who was a director at the India Meteorological Department (IMD). Arrival of the rains nearly on time brightens farm output prospects as farmers can plant crops to give them enough time to reach adequate maturity for a bumper harvest. The weather office treats June 1 as the normal date for the monsoon arrival over the southern coast based on a time series rainfall data of over 100 years. The June-September rainy season starts over the Kerala coast and covers the rest of India and neighbouring countries Bangladesh, Bhutan and Nepal by mid-July.

Joseph based his forecast on the 'pre-monsoon rain peak', when the surface temperature of the seawater in the Bay of Bengal off the east coast of the subcontinent rises about 35-40 days before the monsoon, and clouds near the equator move north. He said this peak occurred during the last week of April causing rains then on the southern coast. Joseph, who is often consulted by the government’s weather office, said there was around six day’s degree of variance in the forecast. His pioneering 'pre-monsoon rain peak' forecast is one of the key parameters used by the IMD. The weather office is expected to release its official forecast on the monsoon onset over the Kerala coast next week. India farm output vs monsoon rainfall http://link.reuters.com/tas67s Graphic on India monsoon - forecast vs actual http://link.reuters.com/xux88r

Last month, India’s weather office forecast normal rains for the third straight year. It had said the country was likely to avoid a drought in 2012 as monsoon rains were likely to be average. Joseph also had words of caution for his forecast. 'The predicted onset could be delayed if any cyclone develops in coming days,' he said, adding the rains could then arrive at least three days after June 1. Last year, Josephs forecast of two days ahead of the normal onset matched the actual onset over the Kerala coast on May 29.

In 2010, he forecast the arrival of the monsoon would be 7-10 days ahead of normal over the Kerala coast, but a cyclone in mid-May on the east coast brought the seasonal rains on May 31, a day ahead of the normal date. The monsoon hit a week ahead of normal in 2009 but the season turned out to be the driest in four decades, causing widespread losses to key crops such as oilseeds and sugarcane, pushing up food inflation.

Posted by Rajan Alexander at 8:12 PM