Giant sunspots took a turn toward Earth this weekend and sent clouds of particles towards Earth. While the risk of it causing geomagnetic disturbance causing damage to satellites and power lines scientists say is low,  Coronal Mass Ejections (CMEs) are often linked to major disasters particularly  earthquakes and volcanoes. It was linked to the Pakistani Floods two years ago and Indonesian Earthquake a few weeks ago. 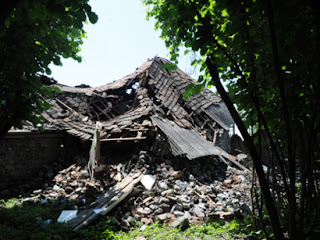 At the time of writing, earthquakes their magnitude and location are listed for today, from which it is observed though minor, the frequency is more than average. It is highly probable that we get a major earthquake in the next 24-48 hours. Let's hope it does not come to pass. Today, one hit Assam. There are many peer review studies that indicate solar flares trigger earthquakes. Abstracts of two such studies we provide below:


We present the study of 682 earthquakes of ¡Ý4.0 magnitude observed during January 1991 to January 2007 in the light of solar flares observed by GOES and SOXS missions in order to explore the possibility of any association between solar flares and earthquakes. Our investigation preliminarily shows that each earthquake under study was preceded by a solar flare of GOES importance B to X class by 10-100 hrs. However, each flare was not found followed by earthquake of magnitude ¡Ý4.0. We classified the earthquake events with respect to their magnitude and further attempted to look for their correlation with GOES importance class and delay time.

We found that with the increasing importance of flares the delay in the onset of earthquake reduces. The critical X-ray intensity of the flare to be associated with earthquake is found to be ~10-6 Watts/m2. On the other hand no clear evidence could be established that higher importance flares precede high magnitude earthquakes. Our detailed study of 50 earthquakes associated with solar flares observed by SOXS mission and other wavebands revealed many interesting results such as the location of the flare on the Sun and the delay time in the earthquake and its magnitude.

We propose a model explaining the charged particles accelerated during the solar flare and released in the space that undergone further acceleration by interplanetary shocks and produce the ring current in the earth's magnetosphere, which may enhance the process of tectonics plates motion abruptly at fault zones. It is further proposed that such sudden enhancement in the process of tectonic motion of plates in fault zones may increase abruptly the heat gradients on spatial (dT/dx) and temporal (dT/dt) scales responsible for earthquakes.

It has been determined that in the period of solar activity increase (11-year cycles) there increase seismic and volcanic activities in the compression zone of Earth and at the same time there decreases the activity in the tension zones of Earth. 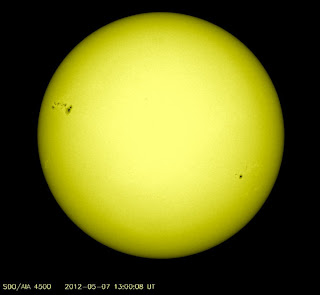 A group of sunspots 11 times wider than the Earth turned to face our planet, raising the possibility of solar flares and auroras tonight. The sunspot cluster - shaped a little like the islands of Hawaii - is much larger than Earth. It measures 100,000 miles from end to end, while the diameter of the Earth is approximately 7,900 miles. The Sunspot Region 1476 became visible over the weekend and two coronal mass ejections (CMEs), where a portion of the sun's atmosphere breaks off, erupted on Tuesday.

The CMEs blasts could arrive on Earth later today and cause moderate geomagnetic storms later and auroras in the higher latitudes, according to NOAA's Space Weather Prediction Center.

The CMEs are travelling at 1.5 million miles per hour but, since they are only partially directed at Earth, they aren't expected to affect communications satellites or other equipment susceptible to space weather. (Special filters are needed for viewing the sun directly to protect the eye, notes Space.com.)

Scientists at NASA's Space Dynamics Observatory called Sunspot Region 1476 a "monster sunspot" because it is so large and noticeable. The spot is so large that people have been able to see it without the aid of telescopes, said Spaceweather.com. Photographers should only view it through the camera's LCD, it warns.

Sunspots are caused by strong magnetic fields inside the sun's cores, which sometimes result in solar flares where high-energy particles are sent off into space.

The sun goes through cycles where the twisting magnetic fields in the core build up strength and cause an increase in solar flares. The sun is approaching a "solar maximum" next year.

Lead Scientist for NASA's Living with a Star Program, Madhulika Guhathakurta was quoted by the media saying:
"Everyone is watching the sunspot because it has the potential to produce strong flares, but that doesn't necessarily mean we're going to have a severe magnetic storm. We can't predict anything ahead of time. We have to wait for particles to arrive at a certain point where we have a spacecraft, and this measures the particles and the orientation of the magnetic field - that's when we'll know if the particles will penetrate through.
NOAA and NASA would then issue a forecast alert to notify people of the possibility of disruptions.

If particles penetrate through, they do have the potential to affect satellites, interfere with radio signals and, in the most severe situations, create voltage fluctuations in power grids.

A 1989 power blackout in Quebec was later blamed on a solar storm, though there's been nothing comparable since.

But, Guhathakurta said, "There's really nothing to be afraid of. It's typically only electronics and machinery that are affected."

However sunspots themselves are slumping and their predicted size makes this the smallest sunspot cycle in about 100 years.  April solar index numbers seem to support this prediction.

All three main solar indexes tracked by NOAA’s Space Weather Prediction Center are down in April as seen in the graph below: