Has Oxfam finally seen the Light? Yields of Organic Agriculture are too low for solving problems of global hunger?? 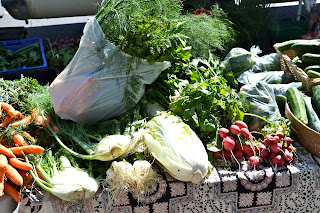 Ever since NGOs launched their so called Climate Smart Agriculture (CSA) programmes, this blog had been a staunch critic of CSA, accusing it as part of an eco-imperialist strategy to accentuate global hunger and poverty.  As a livelihood consultant within the NGO sector with experience of over 30 years, I was aghast how CSA was packaged by leading international NGOs as an anti-hunger solution when it was conceptually designed to exactly do the opposite viz create more global hunger.

The From Poverty to Power blog is described as the official website of Oxfam International administered by Duncan Green, Head of Research of Oxfam Great Britain. In a post yesterday, to my surprise here is what I found Duncan informing his readers:

“Don’t pack away those fertilizers just yet. A comprehensive review of research on organic v chemical agriculture concludes that organic yields are significantly lower; although it varies a lot by crops (strawberries and soybeans do better).

The link was to a Nature’s news item of a study published by the same scientific journal entitled “Organic farming is rarely enough. Conventional agriculture gives higher yields under most conditions”.  Though we climate sceptics do not like Nature too much it because of their pro-global warming bias, nevertheless it remains the world's most cited interdisciplinary scientific journal and as such, prestigious.  Read their full news item here.

The Nature study main conclusions bore a striking similarity to the positions  espoused by one of our posts (Read HERE). These are the following:

1.   Organic yields are much lower than conventional agriculture

Nature: “Now, a comprehensive analysis of the existing science, published in Nature, suggests that farming without the use of chemical fertilizers and pesticides could supply needs in some circumstances. But yields are lower than in conventional farming, so producing the bulk of the globe’s diet will require agricultural techniques including the use of fertilizers, the study concludes....

Crop yields from organic farming are as much as 34% lower than those from comparable conventional farming practices, the analysis find. Organic agriculture performs particularly poorly for vegetables and some cereal crops such as wheat, which make up the lion’s share of the food consumed around the world...

Cereals and vegetables need lots of nitrogen to grow, suggesting that the yield differences are in large part attributable to nitrogen deficiencies in organic systems.”


Our Blog: “In 1900 the virtually fertiliser-free agriculture was able to sustain 1.625 billion people by a combination of extensive cultivation and organic farming on the total of about 850 mio ha. The same combination of agronomic practices extended to today’s 1.5 billion ha of cropland would feed about 2.9 billion people or about 3.2 billion when adding the food derived from grazing and fisheries.

This means that without nitrogen fertilisers no more than 53% of today’s population could be fed at a generally inadequate per capita level of 1900 diets. If we were to provide today’s average per capita food supply with the 1900 level of agricultural productivity, we could feed only about 2.4 billion people or just 40% of today’s total.”

2. Mismatch of nutrient supply cycle with the nutrient demand cycle.

Nature: “In conventional agricultural systems, farmers apply chemical fertilizers to fields while the crops are growing, delivering key nutrients such as nitrogen when the crops need it most. Organic approaches, such as laying crop residue on the soil surface, build up nutrients over a longer period of time. “There is not the synchrony between supply of nutrients and crop demand.”

Our Blog: “Nitrogen applied through fertilizers, organic or synthetic, is converted to plant-available-nitrate by the same chemical process by the same bacteria living in the soil. As a crop grows it starts off with a limited need for nitrogen because the plants are small and they are getting some which was stored in the seed itself.  Then they go into a period of very rapid growth where they need quite a bit of nitrogen (and other nutrients).  During the period of “grain fill” there is very high demand for nutrients.  After that, the plant does not really need or take up nutrients over weeks prior to harvest.

So the key to nitrogen management lies in matching nutrient supply cycle with the nutrient demand cycle. This is easier done in synthetic fertilizers as application can be staggered in splits, placed more precisely for root absorption and through use of nitrogen stabilization products.

Generally, nitrogen contained in livestock manures must be transformed by bio-chemical processes (mineralisation and nitrification) before becoming available for plant nutrition. However, any organic nitrogen which is mineralised later in the year after the period of active uptake by the crop may be leached from the soil during winter and can contribute to pollution of ground water.”

Nature: “Crop yields from organic farming are as much as 34% lower than those from comparable conventional farming a practice, the analysis finds. Organic agriculture performs particularly poorly for vegetables and some cereal crops such as wheat, which make up the lion’s share of the food consumed around the world.
Cereals and vegetables need lots of nitrogen to grow, suggesting that the yield differences are in large part attributable to nitrogen deficiencies in organic systems.”

Our blog: “Till pre-industrial times accordingly farmers developed three main ways to channel plant nutrients to the arable land to help to maintain its fertility:

• Recycling as much as possible of the nutrients originally taken up by the crops from the arable soils as farm-yard manure and crushed animal bones
• Adding nutrients to the manure by using roughage and litter collected from meadows and forests, but thus impoverishing other natural ecosystems,
• Fixing additional nitrogen from the air by growing leguminous crops as part of the rotation.

While together it might have been enough to stabilise yields, it would never have been sufficient to increase yields to the extent that the continuing growth the population demanded. Even the most intensive use of these practices in areas whose climate allowed year-round cropping could not supply more than 120–150 kg N ha yr.

An increase in yields could only be achieved when the nutrient concentration in the soil was raised; enabling the plants to take up more in the limited time of their growing season. Synthetic nitrogen filled this need. Nitrogen was the most commonly yield-limiting nutrient in all pre-industrial agricultures.
Only the Haber-Bosch synthesis of ammonia broke this barrier. Norman Borlaug summed up the importance of synthetic nitrogen in his speech accepting the Nobel Peace Prize in 1970:

“If the high-yielding dwarf wheat and rice varieties are the catalysts that have ignited The Green Revolution, then chemical fertilizer is the fuel that has powered its forward thrust…"

Neither the conclusions of the posts of our blog nor of the Nature journal are earth shattering per se. Any livelihood staff or consultant within the NGO sector, worth his or her salt, should find them as common knowledge. The fact that all except a handful preferred not to openly air their critique of Climate Smart Agriculture (CSA) is a sad commentary to both their outwardly demonstrated commitment to the poor and professional integrity. This is so even as they demonstrate a high propensity to speak on behalf of the poor and frame policies ostensibly to the benefit of the poor.

Though we noticed that Oxfam visits our blog from time to time as our hit counter indicates, they most likely have chosen to ignore our criticism of their CSA - their current flagship programme. But now that the contents of scientific journal “Nature” have been taken note of by Oxfam’s policy blog, would they take the process to its logical conclusion and scrap CSA altogether?

Indur Goklany: Oxfam—Betraying its Roots and Sabotaging its Own Mission

Oxfam’s and ActionAid’s Climate Smart Agriculture policies will accentuate global hunger, not mitigate it!  This is a 4 part post.

Posted by Rajan Alexander at 5:31 PM