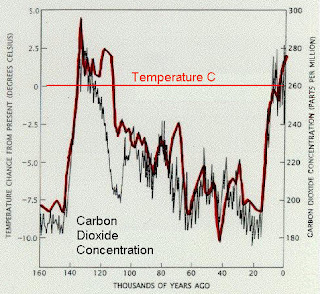 If Rajendra Pachauri, Chair of the Intergovernmental Panel on Climate Change (IPCC) thought his troubles are over, think again.  Now one of his reviewers in a peer reviewed paper produced results that invalidate the main conclusions of the IPCC 2007 report called the AR4.

Previous research showing humans are responsible for emissions of CO2 is wrong. Increasing CO2 is not ‘driving the climate bus’ but is very much in the back seat to temperature. Natural processes alter isotopic ratios similar to expected from burning fossil fuels. Till climate hysteria broke out, climate science always attributed increase in CO2 as only an outcome of temperature rise with a time lag. Even Al Gore inadvertently presented in his movie an An Inconvenient Truth a graph showing 800 year lead/lag issue related to the paleo temperature and CO2 graphs. This fact what climate sceptics always claimed was drowned by the roar of climate alarmism. Now one of their own, an IPCC reviewer, Professor Murray Salby, Chair of Climate at Macquarie University, Australia has turned "consensus science" on its head. The popular climate skeptic blog Jo Nova comments:

Salby has worked at leading research institutions, including the US National Center for Atmospheric Research, Princeton University, and the University of Colorado. He is also been a visiting professorships at Paris, Stockholm, Jerusalem, and Kyoto, and he’s spent time at the Bureau of Meteorology in Australia. He has a strong list of publications here. And he is the author of this paper - Fundamentals of Atmospheric Physics, and Physics of the Atmosphere and Climate, due out in 2011."

Posted by Rajan Alexander at 7:37 PM