Thank climate change for the rise of humans 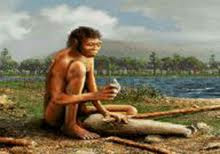 Some claim climate change will destroy our species; now it seems it also helped forge it. The rapid fluctuations in temperature that characterised the global climate between 2 and 3 million years ago coincided with a golden age in human evolution.

The fossil record shows that eight distinct species emerged from one hominin species, Australopithecus africanus, and alive 2.7 million years ago. The first members of our genus appeared between 2.4 and 2.5 million years ago, while Homo erectus, the first hominin to leave Africa, had evolved by 1.8 million years ago.

To work out whether climate had a hand in the speciation spurt, Matt Grove of the University of Liverpool in the UK turned to a global temperature data set compiled by Lorraine Lisiecki at the University of California, Santa Barbara. Lisiecki analysed oxygen isotopes in the shells of fossilised marine organisms called foraminifera. During glacial periods, the forams' shells contain more of the heavier of two oxygen isotopes, as the lighter one is preferentially accumulated in snow and ice rather than the ocean.

Grove found that the mean temperature changed suddenly on three occasions during the last 5 million years. Each change was equivalent to the difference between glacial and interglacial temperatures - but none of these episodes coincided with the hominin "golden age". What marked out this period was a greater range of recorded temperatures, suggesting it was a time of rapid but short-lived fluctuations in climate. Grove says such conditions would have favoured the evolution of adaptability that is a hallmark of the genus Homo (Journal of Archaeological Science, DOI: 10.1016/j.jas.2011.07.002).

Grove says the classic survival traits of H. erectus, forged during this period of change, include teeth suited for generalised diets and a large brain - both of which should have been advantageous at a time of swift climate change.