US agencies switch outlook to ‘La Nina' watch in Pacific 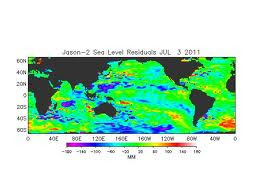 The Climate Prediction Centre (CPC) of the US National Weather Services has officially switched its El Nino-La Nina alert system status to a ‘La Nina watch.'

La Nina refers to the cooling of equatorial Pacific Ocean and shifts the warming pool of waters and storminess to the west, which has traditionally aided a concurrent Indian monsoon without direct cause-effect relationship.

A synopsis of the latest update from the CPC said on Friday that ‘neutral' (neither El Nino nor La Nina) conditions are expected to continue into the northern hemisphere autumn with ‘neutral' or La Nina conditions equally likely thereafter.

This effectively reduces the chances of a feared El-Nino, a proven monsoon-killer on more than one occasion, rearing up its ugly head again in the equatorial Pacific.

A majority of models indicate ‘neutral' conditions will continue into the autumn. But along with a few other models, the latest runs from the Climate Forecast System (CFS) of the US National Centres for Environmental Prediction also predict La Nina to re-develop.

According to some experts, the Indian monsoon in the past has largely ‘behaved' whenever equatorial Pacific has relapsed into neutral conditions, not to speak of a run-up to a likely La Nina.

So the jury is still not out on how the monsoon, half way through the season already, would turn out after it draws to a close in September. India Meteorological Department (IMD) has put out a bleak rainfall scenario for August-September.

Meanwhile, the linear regression in the number of low-pressure areas/depressions in the Bay of Bengal and its deleterious impact on monsoon performance is making experts sit up and take serious notice expressions have occurred over land.

Dr Gupta is apprehensive of a serious anomaly in the monsoon flows presenting itself in this manner, which may have affected the spatial and temporal distribution of rainfall over the past few years.

And this has happened at a time when the overall flows have been good and sea-surface temperatures in the Bay have added up to threshold levels except on a few occasions.

This calls for a focused study in the larger context of fears having been expressed if global warming has not caught up with the Indian monsoon system, Dr Gupta said.

Read  also: Is La Niña re-emerging after a brief break?

Posted by Rajan Alexander at 8:46 PM