The above photo is from the 2005 science fiction movie An Inconvenient Truth, wherein Al Gore inserted an animated clip of the polar bear in danger of drowning, trying to get onto a tiny ice flow made smaller, presumably by global warming. Science magazine used this fake image to hype the issue and subsequently apologised for this.

Gore based his presentation on a study by a US federal wildlife biologist whose observation in 2004 of presumably drowned polar bears in the Arctic helped to galvanize the global warming movement. He has been placed on administrative leave and is being investigated for scientific misconduct, possibly over the veracity of that article. The population of polar nears from 5,000 in 1950 multipled over five times by 2010.

Imagine the environmentalists like WWF, Greenpeace, Centre foe Environment & Science and their magazines like Sanctuary and other foreign funded NGOs like Oxfam, ChristianAid; Care; World Vision etc had used this scam to whip up climate hysteria in India.  We reproduced this excellent article by Amrutha Gayathri of International Business Times revealing the scam.

Polar Bear Population Higher than in 20th Century: Is Something Fishy about Extinction Fears? 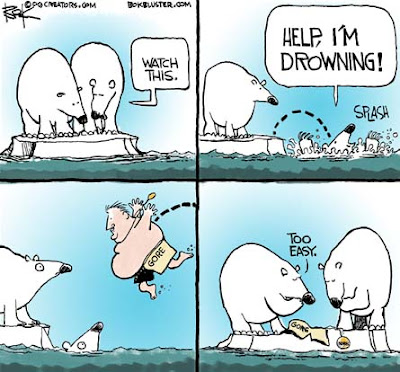 If you think statistics are a pointer towards the growth or decline of a species, it will be interesting to have a look at the estimates published in a 2008 report by U.S. Senate Environment and Public Works Committee.

J. Scott Armstrong of The Wharton School, University of Pennsylvania; Kesten C. Green of Business and Economic Forecasting, Monash University; and Willie Soon of Harvard-Smithsonian Center for Astrophysics, Cambridge, published their findings in 2008, arguing that the claims of declining population among polar bears are not based on scientific forecasting principles.

Polar Bears Have a Strong History of Survival


The reports and photographs of polar bears dying of exhaustion from swimming, unable to navigate the larger-than-usual water bodies formed between ice covers in the arctic, also added to the fears propagated by global warming alarmists. But a quick look at polar bear facts and figures will prove that deaths of polar bears cannot necessarily be associated to swimming large distances as there can be myriad numbers of reasons for the deaths of these cold-weather predators.

According to polar bear facts provided by World Wide Fund for Nature (WWF), the bears are excellent swimmers and have an average swimming speed of 9.7 kph (6 mph) while their average walking speed is a much less 5.5 kph (3.5 mph) which is a mechanism to keep body heat to the minimum. They have a layer of fat up to 11 cm (4.3 in) thick keeps the bears warm, especially while swimming.

Polar bears first evolved more than 110,000 years ago in coastal Siberia and proceeded to interbreed with brown bears multiple times after they first diverged. Under their dense fur is black skin, which aids in absorbing the rays of the arctic sun.


One can look at the history of polar ice melting to better understand the habitat of polar bears.

Scottish scientist Dr. Chad Dick, of the Norwegian Polar Institute in Tromso, after researching the log books of Arctic explorers spanning the past 300 years, believes the outer edge of sea ice may expand and contract over regular periods of 60 to 80 years. According to his research findings, he concluded, "the recent worrying changes in Arctic sea ice are simply the result of standard cyclical movements, and not a harbinger of major climate change."

If 300 years of study revealed 60-80 cycles of climate changes, the arctic climate would have presumably undergone many more cycles of drastic changes over the past thousands of years. And with a more than 110,000-year history of survival, it doesn't mak sense to believe that polar bears are dying unable to withstand swimming exhaustion due to larger water bodies.

Award-winning quaternary geologist Dr. Olafur Ingolfsson, professor from the University of Iceland, has conducted extensive expeditions and field research in both the Arctic and Antarctic.

"We have this specimen that confirms the polar bear was a morphologically distinct species at least 100,000 years ago, and this basically means that the polar bear has already survived one interglacial period.

"This is telling us that despite the on-going warming in the Arctic today, maybe we don't have to be quite so worried about the polar bear," according to a report published by U.S. Senate Environment and Public Works Committee. 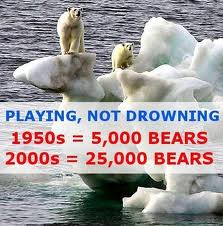 Polar bears are not immortal, and they do succumb to death. What is disputed is the exact cause of death. "The international Agreement on the Conservation of Polar Bears allows for the taking of polar bears for use by local people using traditional methods and exercising traditional rights," says the WWF's site, as it supports the "right of indigenous peoples to continue to sustainably harvest local animals."

Canada allows legal hunting of polar bears by non-native sport hunters and the hunting statistics of Russia and Greenland are not available due to lack of monitoring. "Since it is not known whether killing polar bears is balanced against the sustainable yield of a known population size in such areas, there is reason for concern regarding the sustainability of these practices," the WWF claims.

If the world is actually feeling threatened that polar bears might cease to exist at some future point of time, why are they still being subjected to legal hunting? And even if only the native populace holds the right to hunt polar bears why is monitoring inadequate to track the hunting by non-natives?

Posted by Rajan Alexander at 1:12 PM