Pushed past their tipping point, climate alarmism collapses like a deck of cards 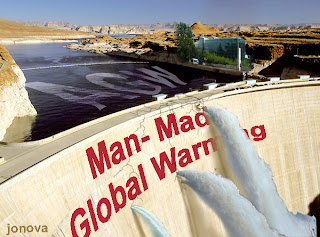 The origin to the "gobal warming hoax" can be traced to a high profile scientific conference in 1975. Participants included organizations such as the United Nations, the Bilderberg Group (New World Order), the Club of Rome and then world leaders such as Al Gore, Mikhail Gorbachev and Jacques Chirac to name just a few.

Western governments took to it like fish to water as it found tight fit with their neo-colonial agenda of increasing hunger and poverty in developing countries so that their faltering economies could be given a new leash of competitive advantage, enabling the continuance of their economic and political dominance of the world. Their ultimate aim was the establishment of a single world, authoritative government controlled by the West. Global warming was then latched on as a lucrative scam by scientists, industry, NGOs and environmentalists who took to hysteria generation around an issue totally unfounded by any robustly verifiable evidence.

William M. Gray an internationally renowned hurricane IPCC scientist elaborated on the wider conspiracy. He included the need to come up with an enemy after the end of the Cold War, and the desire among scientists, government leaders and NGOs and environmentalists to find a political cause that would enable them to organize, propagandize, force conformity and exercise political influence. In 2009, my pal, James Delingpole of the UK Telegraph commented in a similar vein:

"... governments like President Obama’s, which intend to use ‘global warming’ as an excuse for greater taxation, regulation and protectionism; energy companies and investors who stand to make a fortune from scams like carbon trading; charitable bodies like Greenpeace which depend for their funding on public anxiety; environmental correspondents who need constantly to talk up the threat to justify their jobs."

So what began originally as a carefully finely-tuned orchestrated strategy to contain the economic and political rise of developing countries through a world government controlled by the West went amok by indiscriminately targeting one and all in planet Earth due to the effect of various disparate forces with varying sub-agendas jumping into a common gravy train just as bees attracted to honey.

Fortunately for us, the well oiled fear machine of this richly funded criminal conspiracy has crossed its "tipping point". Malcolm Gladwell, defined the tipping point as "the moment of critical mass, the threshold, the boiling point." Tipping point accordingly is similar to what happens if you were to prick an inflated balloon with a needle. As John Costello, a sceptic observed:

"While collective sadomasochism somehow seemed like a romantic idea at the time, it quickly lost its charm as it dropped precipitously out of fashion. Die-hard climate alarmists are shaking their heads in disbelief: how could decades of careful and meticulous brainwashing collapse in a matter of mere months? But their plaintive hand-wringing is itself falling on deaf ears, as their followers desert the sinking ship in droves"

We sceptics can now sit back to sip cold beer to enjoy the tragic comedy each day brings of this collapse. The exponential cataclysm of climate alarmism is so rapid that it has been a strain on us poor bloggers to keep up with the avalanche of its developments. But we try our best to capture the most significant within limits of our resource constraints. Here we provide an overview: 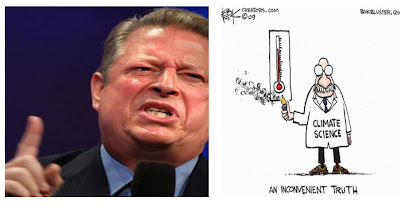 - Al Gore has now waved the white flag: "There’s no longer a shared reality on an issue like climate...we  cannot possibly come into agreement on it"  A tacit admission that "consensus science" was just a myth and the forecast that the Durban meeting later this year will come a cropper.  Read here

- The latest Rasmussen Reports say 69% of US citizens feel its likely scientists have falsified global warming research , this despite 12% of the US by area under the most severe drought . Read here

- There is now this flurry of peer reviewed research, all rushing to invalidate the IPCC Reports; the coup de grâce provided by some of the leading IPCC scientists, themselves taking the lead to land the lethal blows on the IPCC. Read here, here & here

- Meanwhile, to shore up their flagging support base, diehard warmist scientists and climate centers are buzy churning out explanations after explanations (excuses) for the lack of warming seen since 1998 despite CO2 levels in the atmosphere reaching record levels. Read here

- Despite severe drought in parts of the US and East Africa, so intense is the crisis of confidence that warmists daren't link these events with global warming. Instead the blame is  on ENSO, a natural cycle Read here

But the true horror for climate alarmists is that the climate turned decisively against them, reducing their cause to irreversibly hopeless to turnaround. Due to a confluence of several natural climate cycles, Planet Earth is fast flipping towards a period of cooling just as we sceptics had always predicted it would do so. The only question now defying a "scientific consensus", just how low the temperature will go and how long will it last? Read here 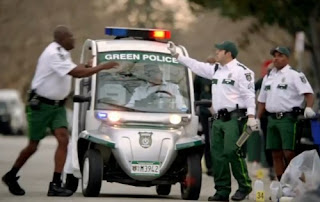 But do we expect eco-fascists to give up the fight so easily? Of course we don’t.  Paul Joseph Watson Prison Planet.com has written an excellent piece on the philosophical underpinning of Global Warming movement entitled Eco-Fascists Call For Tyranny To Enforce Draconian Agenda. We encourage you to read this article. And as the global warming scam collapses, we can expect climate alarmists to get increasingly desperate and transparently thuggish in their rhetoric. And as Watson so eloquently describe it:

“The mask of the man-made global warming movement is slowly being ripped away to reveal the true nature of what we face – a gang of hardcore control freaks who have hijacked well-placed environmental concerns as a vehicle through which to enact their religion of death – eugenics.”

That their eco-fascist  tendencies are  alive and kicking is indicated by their desperate attempt last month to by-pass the UNFCC where every individual member country has a voice to determine a climate treaty by instead trying to confer the UN Security Council, where Western countries control power, the status as final arbiter of climate offenses.  Even as their scam was collapsing, here was a last ditch attempt by western powers to realize their original intent viz. world governance.

The western stooge, UN chief Ban Ki-moon, told the Security Council that “Climate change is being conceived as both a cause and amplifier of conflict and instability across the world.” Read here.

The attempt was to legitimatize any future Western member military transgressions as already seen in Iraq and Libya by literally camouflaging these military interventions in the green garb. Vetoed by Russia and China permanent members and voted down by India, non-permanent member in the council, the resolution was soundly defeated. 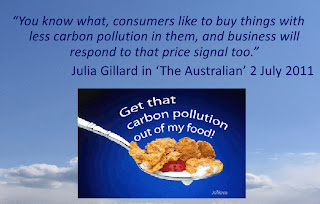 Meanwhile Julia Gillard, Australia’s prime minister, promised voters she would not introduce tax carbon to get elected. Her Labour Party fell short of a simple majority and had to align with the Green Party to govern. The eco-fascist Greens then made Gillard renege on her promise and she had to introduce a carbon tax bill which if passed would impose a hefty tax of $23 per metric ton for carbon in Australia.

Her eugenic philosophy clearly comes through when she hard-sell her carbon tax by the statement depicted in the above slide. Carbon is treated as pollution and science illiterates that constitute the great majority of our population simply do not understand the fact that all life forms on earth are carbon based. Eliminating carbon simply means eliminating life. And since all food we eat is carbon based, eliminating carbon is just an euphemism  for eliminating food. This is why since the implementation of climate policies global food availability has decreased; poverty and food inflation have increased by the twin impacts of fossil fuel taxation and bio-fuel use.

Opinion polls suggest that over two-thirds of all Australians are against such taxation and even if the bill is passed as an act, the ruling Labour-Green coalition would be literally wiped out if an election is held today. If despite such  a prospect the ruling coalition is so intent in introducing this draconian agenda, it may suggest that the future of democracy itself is in peril.  Australia would serve as a crucible for experimentation for this draconian agenda which they then intend replicating all over the world.

So we to stay more vigilant than ever before. Climate alarmism maybe collapsing but they will strive to impose their eugenic policies through other eco-fascist routes.