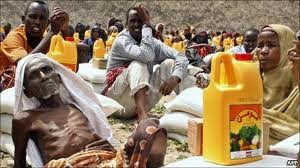 For 20 000 years, climate variability in East Africa has been following a pattern that is evidently a remote effect of the ENSO phenomenon (El Niño Southern Oscillation) known as El Niño/La Niña. During the cold phase of La Niña, there is marginal rainfall and stronger winds in East Africa, while the El Niño warm phase leads to weak wind conditions with frequent rain.

Moreover, during the coldest period of the last ice age about 18 000 to 21 000 years ago, East Africa’s climate was relatively stable and dry. This result was published by an international group of researchers from Potsdam, Switzerland, the United States, the Netherlands and Belgium in the latest issue of the journal “Science” (Vol. 333, No.6043, 05.08.2011).

ENSO with its warm phase (El Niño) and its cold phase (La Niña) is actually known as a climate phenomenon in the Pacific with global tele-connections. Using the example of climate variability in East Africa, the study shows the long-term impact of this phenomenon in this sensitive region. The sediments in Lake Challa in southeastern Kenya, at the foot of Mount Kilimanjaro, serve as a climate archive.

Sample cores that were drilled here show a pattern of stripes, so called annual laminae. Each individual layer holds information about the climate.

“The thickness of these layers varies according to the climate, from 0.08 to 7 millimeters,” explains Christian Wolff (University of Potsdam and GFZ German Research Centre for Geosciences).

“A comparison of temperature measurements in the tropical Pacific over the last 150 years shows a strong correlation between ENSO cycles and the rhythms of droughts and floods in East Africa.”

That is to say, two climate patterns are superimposed here. The basic rhythm is provided by the annual rainy seasons, which are linked to the so-called Intertropical Convergence Zone (ITCZ). This refers to the band of clouds near the equator, which is formed by sunlight and excessive evaporation. With the sun high in June on the northern hemisphere and in December in the southern hemisphere, this band of clouds and the rain associated with it moves north- or southwards, respectively. This seasonal event is apparently superimposed by the ENSO phenomenon. The length of the drill core allowed the tracking of climate variations to the last ice age. Bio-geochemical proxy data and careful seismological exploration of the sediment layers brought together a very good agreement with the thicknesses of individual layers. It was found that even in the last glacial, when the world was about 5 degrees colder globally and thus the energy budget of the tropics system was smaller due to lower temperature, the ENSO phenomenon was seen as a superimposed pattern, albeit weaker.

In comparison, the last 3000 years were warmer and more volatile, with intensive dry and drought periods, as this year, and massive rainy periods, which frequently lead to flooding. Climate models show that this trend towards an increase in extreme dry and wet phases continues on in a warming world. The study was funded by the DFG German Research Foundation, the ESF European Science Foundation and the U.S. National Science Foundation NSF.


Read also: East African Famine: Yet Another example why IPCC model is off the mark

Posted by Rajan Alexander at 9:23 PM