Is La Niña re-emerging after a brief break? 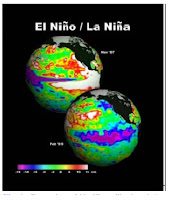 The 2010-2011 La Niña was one of the strongest in recorded history. Though the La Niña was officially pronounced dead in April this year, this blog however had been predicting a multi-year La Niña with a short  intervening period of ENSO neutral conditions during the boreal (northern hemisphere) summer. This was the basis of a pattern thrown up by the analysis of its historical data.

There are preliminary indications that the 2010-2011 La Niña will be no different and most likely will take on a multi-year character. The recent ENSO wrap up data of Bureau of Meteorology (BoM), Australia for instance shows the Southern Oscillation Index (SoI) in clear La Niña territory at +9.9 after a very brief period in neutral territory.

(Note: Sustained positive values of the SOI above +8 may indicate a La Niña event).

Similarly, the Niño 3.4 value have turned negative at - 0.2 C, seem inching back to La Niña territory.

If the La Niña re-emerges by September end in time for Northern Hemisphere, winter the bad news is that we can expect a surge in disasters. (Read here). The good news is the subsequent phases of a La Niña event is usually relatively less strong than the first phase - so the scale and frequency of disaster as seen last year should be considerably less. 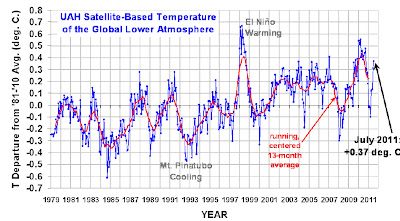 Global temperature anomalies as seen in the above graph have slightly increased to + 0.375 C for month ending July 2011. This should be the peak for this year and henceforth, global temperatures can be expected to start plunging again.

Further, Stewart Franks, associate professor in environmental engineering at NSW's University of Newcastle, said his research suggested "enhanced" La Niñas for the next couple of decades at the very least.

"What we noticed is El Niño and La Niña events are actually not random, they tend to cluster, and they cluster on time frames between 10 to 40 years," he said.

Professor Franks, an Australian national representative to the International Association of Hydrological Sciences, said the last run of strong La Niñas occurred between the mid-1940s and mid-1970s, culminating in the 1974 floods. They were followed by about three decades dominated by El Niño dry climate patterns.

"We are seeing a return to the devastating impact of the enhanced La Niñas we saw in 1945 to 1975, so that indicates to my mind that it's entirely possible that were facing 20 to 30 years of repeated, frequent or enhanced La Niñas," he said.

The "demise" of the La Nina is the primary reason why the IMD forecasted India's seasonal monsoon to  be 'below normal' in August and September. "Quantitatively, rainfall for the country as a whole during the period August to September is likely to be 90% of Long Period Average (LPA)," the India Meteorological Department (IMD) said  in its outlook for the second half of the monsoon session. The annual rain season began on a good note with June receiving 111% falls, followed by a slump in July which witnessed 86% rains.

While the weather office sees 46% probability of below normal (86-94% of LPA) rainfall in the next two months, the probability of deficient rains (less than 85% of LPA) is 27%. The country has received 95% rainfall of the LPA in June-July. IMD said that the model error of 8% for August-September forecast would mean that some areas may get 98% rain while it may be 82% in other places.

The re-emergence of the La Nina if any could mean that the NE Monsoon in all probability could be above average and to that extent offset some of the deficiency of the SW Monsoon.

But there is still a good chance of normal rains during August-September. The Tokyo-based Regional Institute for Global Change (RIGC) have maintained their forecast for the return of La Nina conditions towards the autumn. The Climate Prediction Centre of the US National Weather Services too had come out with an outlook recently suggesting the return of La Nina later this year.

In what is a good sign for the Indian monsoon, the RIGC has also said that the La Nina would be accompanied by a ‘weak positive Indian Ocean Dipole’ from August to November.

The India Ocean Dipole (IOD) is a seesawing of ocean water temperatures in west and Indian Ocean, closely resembling the El Nino-La Nina phenomenon in the equatorial Pacific but with more direct and immediate impact on Indian monsoon.