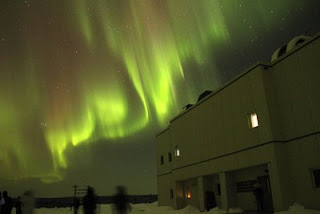 100Mev proton burst has been recorded on August 4th, with ongoing high proton flux, along with earth-facing coronal holes.  Solar flares are associated with earthquakes, volcanoes and other disasters. The Leh cloudburst occurred hours after a solar flare. But this one is much bigger.

A 1MeV proton burst is a massive burst and Piers Corbyn, astrophysicist and weatherman, has predicted August 8-10 the danger period. Below is a media report about the solar flare.

STRONG SOLAR ACTIVITY: For the third day in a row, active sunspot 1261 has unleashed a significant M-class solar flare. The latest blast at 0357 UT on August 4th registered M9.3 on the Richter Scale of Flares, almost crossing the threshold into X-territory (X-flares are the most powerful kind). The number of energetic protons around Earth has jumped nearly 100-fold as a result of this event.

The eruption propelled a bright coronal mass ejection (CME) toward Earth. Click on the image to view a movie of the expanding cloud recorded by the Solar and Heliospheric Observatory:

Moving at an estimated speed of 1950 km/s, this CME is expected to sweep up two earlier CMEs already en route. Analysts at the GSFC Space Weather Lab say the combined cloud should reach Earth on August 5th at 13:55 UT plus or minus 7 hours: "The impact on Earth is likely to be major. The estimated maximum geomagnetic activity index level Kp is 7 (Kp ranges from 0 - 9). The flanks of the CME may also impact STEREO A, Mars and Mercury/MESSENGER." High-latitude sky watchers should be alert for auroras.

The National Oceanic and Atmospheric Administration issued a release on what to expect when the sun impacts space weather:

"On a summer day in 1859, a silent surge of power from a major geomagnetic storm fueled by a solar eruption hit telegraph offices around the world," states the NOAA release. "Some telegraph operators got electric shocks. Papers caught fire.

And perhaps most amazing, many telegraph systems still sent and received signals even after operators disconnected batteries. It was as if the very air was charged with electricity. Airline communications, GPS apps and power grids are all reportedly vulnerable to space weather. The most common impacts of solar flares for the average person are the glowing auroras around the north and south poles." 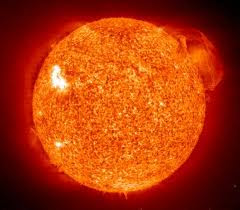 A series of solar flares that erupted on the Sun over the last three days have crossed the solar system and hit the Earth's magnetic field on Friday afternoon. The flares, which are backed by a small radiation storm and a spectacular coronal mass ejection (CME), might stimulate aurorae on Friday night and could disrupt power grids and satellites. The National Weather Service (NWS) issued a warning for G3 (Strong) Geomagnetic Storm as G2 (Moderate) conditions has already surpassed. The solar flares caused some radio blackouts Wednesday and Thursday, and caused some disruptions of high-frequency communications with airplanes flying over the Atlantic and Pacific oceans. Three solar flares erupted on the sun beginning on Tuesday, and the most powerful electromagnetic shocks were being felt Friday by the ACE spacecraft. The ACE spacecraft measures radiation bursts several minutes before they hit the Earth. Real-time data from ACE is used by the Space Weather Prediction Center to improve forecasts and warnings of solar storms.

“It is too early to know what the effects of the blasts will be. If it is a really big storm, it still could be active Saturday night, but this kind of disturbance level won't be sustained for long,” said Joseph Kunches, a space weather scientist with NOAA's Space Weather Prediction Center. A solar flare is caused when intense burst of radiation comes from the release of magnetic energy associated with sunspots. Flares are the solar system's largest explosive events. A CME happens when the outer solar magnetic fields are closed, often above sunspot groups, and the confined solar atmosphere can suddenly and violently release bubbles of gas and magnetic fields. While a strong solar flare increases the chance of a spectacular light show, the electromagnetic pulse can also disrupt satellite communications, power grids and radio traffic when it passes the Earth. Some industries that are usually affected by solar flares include electrical power grid companies, airlines, GPS, military and ocean shipping routes. The strongest solar storm on record is called the “Carrington Event,” which is named after Richard Carrington, who viewed and reported on the solar flare of Sept. 1. It occurred in late August and early September, 1859. From Aug. 28 through Sept. 4, aurorae of unusual brilliance were observed throughout the globe. Tom Bogdan, director of NOAA’s space environment center, said over the next three to five years scientists anticipate a number of these blasts will become more frequent. He said the next climax, called a solar maximum, was expected in 2013.

Posted by Rajan Alexander at 2:28 PM