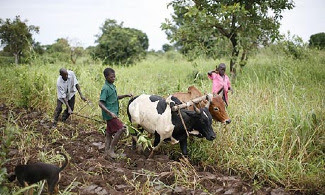 If you want to learn what farmers think (and need), talk to African farmers – not to bureaucrats, environmental activists or politicos at the Rio+20 United Nations summit in Rio de Janeiro. You’ll get very different, far more honest and thoughtful perspectives.

The recent (May 24) Food, Agriculture and Natural Resources Policy Analysis Network conference in Pretoria, South Africa brought together delegates from agricultural communities in many African countries. FANRPAN’s primary objective is to improve food security in Africa, by ensuring that small-scale farmers can become more productive. Their obvious enthusiasm and commonsense views were heartening.

FANRPAN chair Sindiso Ngwenya of Zambia gave an incisive presentation, pointing out that agriculture is the key to reducing poverty and ensuring food security in Africa. “We call upon the world to assist us,” he said, “not by treating us as beggars, but by treating us as equals.”

Ngwenya criticised many First World attempts to use climate change, biodiversity and sustainable development arguments to prevent African agriculture from advancing. “If you are using implements that were there before Christ, how much chance do you have?” he wanted to know.

And why would anyone think these UN-EU-US issues are important to African farmers and families who are trying to feed their families and neighbors, and improve their living standards by exporting their products?

Africa does not need foreign aid in the form of handouts, Ngwenya emphasized. African farmers need modern technology and reliable, affordable electricity. They need the world to buy African produce. Instead, far too often, European and other First World countries impose rules or block African exports, using a multitude of excuses that can no longer be tolerated.

FANRPAN has decided to go “Africa-wide,” Ngwenya announced. Africa is huge –larger than the United States, China, India and Europe combined. And yet 60% of its arable land is not used at all. On the arable land that is used in most African countries, crop yields are typically a quarter of the norm in South Africa. What’s needed, he said, are modern farming methods, seeds, fertilizers and equipment –at the level of every individual farmer.

Referring to the 2011 COP-17 world environment congress in Durban, South Africa, Ngwenya pointed out that the FANRPAN slogan is “No agriculture, no deal.” However, agriculture, and particularly the advancement of rural African agriculture, was not included in past COP objectives. Many delegates criticised this, saying it reflected the First World’s hope that Africa and African agriculture will remain primitive and underdeveloped, so that rich countries can praise Africans for being “sustainable” and protecting the planet.

Africans are being told by First World activists, politicians and pressure groups to “stay in tune with nature,” delegates noted – when this attitude really reflects a well-fed First World’s maneuver to retard African agricultural improvements.

When it came to the eternal climate change saga, FRANRPAN delegates emphasized “climate-smart agriculture” and noted that Africa has always experienced dramatic weather and climate variations. What’s needed now, they stresse, is sensible, fact-based science, to predict and adapt to local and regional climate cycles and variations.

Equally impressive was learning that a group of small-scale farmers from Burkino Faso had paid their own way to attend a meeting in Windhoek, Namibia, nearly 3,000 miles (4,500 kilometers) away, to present a petition calling for the development of evidence-based policies, to replace what to now have been emotional, harmful and oppressive policies, rules and treaties.

The delegates said they were tired of the First World telling them what to do, based on First World interests and perceptions. They understand all too well that calls for “sustainable development,” “biodiversity” and climate change “prevention” really mean demands for policies and practices that ensure sustained poverty and malnutrition.

FRANRPAN CEO Dr. Lindiwe Sibanda emphasized that the real work is done on the ground, at the level of individual countries – and “policy comes from people.” Individual countries must come to their own conclusions about what works for them, and countries must align their policies to ensure food security for their people, she said. Modern methods and technologies are also required, to enhance intra-Africa food trade and enable countries to export what they are good at producing.

Her enthusiasm was praised by a farmer who spoke from the floor, with a strong French accent. “There’s a lack of resources for small farmers to come here,” he said, even for important meetings like this, but he was glad he had spent the time and money to be there. Certainly, those that did attend exhibited enough excitement and enthusiasm for the millions who could not join them.

Chairman Ngwenya wrapped up the proceedings by criticising the apparently intentional side-stepping of agricultural issues during COP-17. The First World must stop impeding African farmers and end “the paralysis by analysis,” he said. Absolutely right.

There is far too much First World smoke and mirrors, telling Africans they are saving the planet – when the real intention is to stop them from acquiring modern technology and electricity that would allow them to surge to middle class or even rich country status.

This FANRPAN conference serves notice to the United Nations Environment Programme, Rio+20 Sustainable Development Summit, Europe, United States and other obstructionists that Africa has caught on to what they are doing – and is no longer willing to play their game.

That’s good news for every African, Asian, Latin American and other poor family that wants to eat better, live better and have the freedom to pursue their dreams.

Dr Kelvin Kemm is a nuclear physicist and business strategy consultant in Pretoria, South Africa. He is a member of the International Board of Advisors of the Committee For A Constructive Tomorrow (CFACT), based in Washington, DC (www.CFACT.org). Dr. Kemm received the prestigious Lifetime Achievers Award of the National Science and Technology Forum of South Africa.

Posted by Rajan Alexander at 11:08 AM