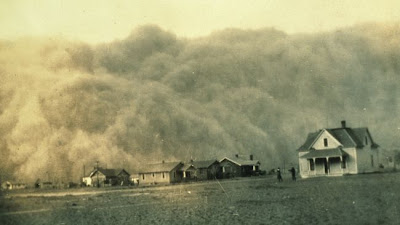 "Houses were shut tight, and cloth wedged around doors and windows, but the dust came in so thinly that it could not be seen in the air, and it settled like pollen on the chairs and tables, on the dishes." - John Steinbeck, The Grapes of Wrath

There have been many comparisons between 2012's growing drought and the 1930's Dust Bowl. Both happened in a time of economic downturn. Both are accompanied by stunning images of dry, withered land. Both have sparked deep concerns about the state of the environment and whether our land and lifestyles are sustainable.

However, there are huge differences.

"In terms of percent area of country affected by drought (as measured by the Palmer Drought Index), the 1930's Dust Bowl decade is the worst drought on record by spatial area,"

We're going to take you back in history to the Dust Bowl, the worst drought in recorded U.S. history, and explain what happened meteorologically, agriculturally and culturally.

What:  A period of severe drought and dust storms.
Where: Plains states though Texas and Oklahoma bore the brunt of the damage.
When:  1930s, particularly 1934 and 1936.
Impact: Major ecological and agricultural damage to American prairie lands

The "why" of the story is the hardest to explain because it's a combination of weather, environmental and educational factors. We start with the weather angle.

"In July of 1934, 80 percent of the country was affected by drought," says Heim. "At its peak the drought went from the West Coast, to the Great Plains, to the Midwest and the East Coast."

The area is known as semi-arid and is naturally prone to drought and high winds. In fact, early settlers referred to it as the "Great American Desert."

For decades, farmers worked the same plots of land and didn't use any of the techniques we now know will help keep farming from depleting the resources of land: crop rotation, fallow fields, cover crops and techniques to prevent wind erosion.

The region's natural defenses are critical to its survival during drought. That leads us to the next contributing factor for the Dust Bowl: lack of environmental understanding.

Farmers plowed deep into the virgin topsoil of the Great Plains displacing the natural grasses. The native grasses of the Plains were deep-rooted and kept the high winds from blowing away soil. They also trapped moisture.

"So when the rains did not come there was no vegetative coverage to hold the land down. The wind would pick up the dirt and create these massive dust bowls."

In addition, cotton farmers left fields bare during the winter or burned what was left in the field to control weeds. That stripped the land of remaining nutrients and eliminated surface vegetation, which would help keep moisture in place and keep the soil from blowing away in high winds.

While we can never stop a drought or any other weather event, we have learned a lot since the Dust Bowl.

In 1933, Franklin Delano Roosevelt created government programs to mandate better stewardship of the land. The Civilian Conservation Corps began to restore the natural balance by planting trees. We put systems in place to conserve soil and educate farmers about crop rotation and other modern farming practices.

"My sense is it still has a long way to go in terms of duration and severity," says The Weather Channel's Senior Meteorologist Stu Ostro.

"Now if it's a long hot dry summer, which it looks like it will be, and this persists into the winter and next summer, then you're starting to rival the expanse and duration of the 1930s and 1950s. But it's not there yet."

Posted by Rajan Alexander at 2:31 PM