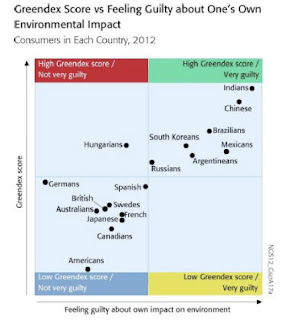 Every year the National Geography conducts a annual Greendex survey. Their latest report is now out. Read here.

How can this paradox be explained? The developed countries continue to merrily increase their per capita "carbon footprint”. However due to "their extreme concern for their environment", they want to offset these increases but not prepared to have their own citizens forgo their living standards.

So what do they do? They instead unleash on developing countries their Trojan Horses - NGOs like WWF; Greenpeace; Oxfam; ActionAid; ChristianAid etc whose hysterical campaigns are designed to condition the minds of unsuspecting citizens from developing countries to go on guilt trips over their abysmally low per capita"carbon footprints" !!! As the National Geography Greendex survey findings indicate; these NGOs did not fail their Western masters and even can use the survey findings to claim "impact" !!

This is a common practice adopted all the time by the West. For example, they raise much hue and cry about deforestation and extinction of species and target countries like Malaysia and Indonesia even when Australia is logically a more appropriate place to target.  Australia, with a smaller population was deforesting (over half million hectares per year between 2000 and 2010) at rate that is 5 times higher than that by Malaysia; forest to total land ratio in Malaysia is 56 % compared to 17% for Australia; and agricultural land to forest area ratio for Malaysia is 1 to 3 whereas it is 3 to 1 for Australia despite its smaller population. There are many Australian animals that are already extinct or endangered as compared to Malaysia where hardly any animal has gone extinct. But Australia is left scot free and it always a developing country that is targeted by the West's Trojan Horses - NGOs.

Posted by Rajan Alexander at 11:49 AM