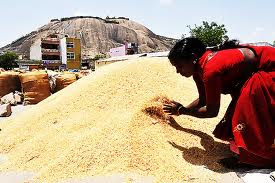 Stocking was only encapsulating the underlying the key rationale to Oxfam’s Grow (CSA)'s campaign:

“A broken food system and environmental crises are now reversing decades of progress against hunger...
The global food system works only for the few – for most of us it is broken. It leaves billions of us lacking sufficient power and knowledge about what we buy and eat and the majority of small food producers disempowered and unable to fulfil their productive potential."

Yet, India experienced this year, an all time bumper harvest. It is in fact only a part of the continuing series of bumper agricultural output in the recent years that has in part fuelled rural consumption in India, which actually proved to be a bulwark against the global economic downturn. Domestic consumption accounts for nearly 60% of GDP, a key factor in India's resilience amid the global economic slowdown.

This year’s monsoon had been playing truant with rainfall deficiency at 21% as of date. Indian agriculture gets around 60-65% of its precipitation from the South West Monsoon (SWM) and any bad rains can spell financial disaster for the country’s 235 million farmers. Despite this, food inflation is still not ticking up as largely expected with monsoons delivering below-normal rains so far. Besides, Indian economists do not consider there are any significant upside risks to food inflation just yet. In terms of impact, they argue, the very most a bad agriculture season could do is chop off at the most 0.25% from the GDP! And Indian GDP is currently floating around the range 6.5-7%, considered very disappointing by Indian standards.  The share of agriculture in GDP has been reduced now to hardly 14%.

But the Oxfam report is apparently not based on all these hard data.  As their report admits:

So the entire “Growing a Better Future” report is based solely on so called experiential perceptions of their staff and partners around the world, also some of whom presumably from India. There is nothing wrong with this except these dudes are entirely out of touch with reality! It looks as if some junkies shot heroin into the veins before actually writing Oxfam’s report!

So it within the fitness of things that the Oxfam report continues to paint a gloomy future for India:

"India is pointing to a future in which agriculture struggles to keep pace with the demands associated with a growing population...
“Global aggregate growth in yields averaged 2 per cent per year between 1970 and 1990, but plummeted to just over 1 per cent between 1990 and 2007. This decline is projected to continue over the next decade to a fraction of one per cent.”

The country’s foodgrain output touched an all-time high of 257.44 million tonnes (mt) in 2011-12, according to the Government’s latest estimates. This represents a whopping 5.17 per cent growth over the final output of 244.78 mt in 2010-11.
India’s population current growth rate is around 1.58% per annum. Given that last year’s foodgrain growth rate of 5.17%, this amounts to roughly 3.3 times India’s population growth rate. So where’s the evidence of India falling under the Malthusian trap? Any insinuations that India has fallen under the Malthusian trap could be attributed to the heroin effect!
Perhaps this where the heroin effect gains free play as Oxfam now feels confident enough to even prophesize on crop specific gloom:

“Climate change poses a grave threat to food production. First, it will apply a further brake on yield growth. Estimates suggest that rice yields may decline by 10 percent for each 1°C (1.8 °F) rise in dry-growing-season minimum temperatures..”

So did Oxfam simply get their maths or position on global warming wrong? In case of either or both eventualities, then the country needs no foreign aid assistance to boost rice production. Such is the surplus that rice farmers for example in Krishna District, Andhra Pradesh is taking to voluntary crop holidays or dumping their produce into the rivers, complaining on the lack of remunerative prices for thir produce! This should explain India’s decision to export rice despite rains playing truant till now - a step under fire by NGO activists like Devinder Sharma.

And this is simply not a situation confined to India.  Asia is sitting on a huge mountain of rice as these extracts of a Reuter report illustrates:

“Asia's bulging stocks of rice, coupled with the waning appetite of top buyers, will keep a lid on prices of the grain in coming months, promising relief to food importers grappling with a one-third jump in the prices of corn and wheat since mid-June.

Top rice exporters India and Thailand are sitting on hefty stockpiles of the grain ahead of new crop harvests, while leading buyers Manila and Jakarta are likely to reduce purchases amid bumper domestic crops.

A limit on rice prices will ensure sufficient supplies for some of the poorest nations in Asia and Africa.”

The ActionAid report “On the brink”  suggests that this NGO does not feel it is far behind the likes of Oxfam in creating disinformation:

“Scientists estimate that already global production of key staples, such as wheat and corn, has fallen by 3.8 per cent and 5.5 per cent respectively over the last three decades, as a result of climate change."

The claims that global production of wheat and corn has declined during the last 3 decades are downright dubious as seen in the above graphs. Even more so, in the case of India as seen from the excellent graph taken from one of Barun Mitra’s (Liberty Institute, New Delhi) publications: 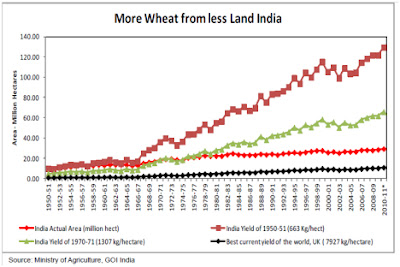 According to media reports, India is expected to produce a record 90.23 million tonnes of wheat in 2012, Agricultural Minister Sharad Pawar said, releasing the ministry's latest output estimates. The estimated output is higher than the 86.87 million tonnes produced in the previous year. This is nearly a growth 4% rate, double that of our population growth. So here too, India demonstrates no evidence of falling into the Malthusian trap.

India, the world's second biggest producer, consumes about 76 million tonnes of wheat a year. This leaves a surplus of around 14 million tonnes that strengthens further India’s Strategic Food Reserves, leaving room for exporting some of these surpluses.

There is of course a supply-demand gap for corn but this has nothing to do with production or productivity of corn. It has solely due with the fact that more and more corn is being diverted for bio-fuel production so Westerners can drive “Green” vehicles. Now Australia and Netherlands have extended such non-food use to bio-aviation fuels.  The solution for corn food supplies is dump the global warming hysteria and all will be well!

India’s estimated corn production for 2011-2012 is around 23 million tonnes. This is over 1 million tonnes over last year. The growth rate for maize is 4.5% - again more than twice that of our population growth rate. No sign of crisis here again!

So why do these international NGOs resort to dubious statistics to build up their case. The Oxfam report Growing a Better Future offers us a clue:

So it is evident that these international agencies have apparently received huge funding for promoting agriculture development in countries like India who does not need their assistance. But the funds nevertheless need to be spent and so is the pressing need to maintain their large infrastructure in the country. The bottom line is that huge number of salaries and perquisites are at stake here, both in India and in the UK. So what do they do? They create a problem where none exists!  Our farmers and the government are doing a fairly good job in ensuring adequate food security in the country. So they demean their achievement in the process of painting a bleak picture of a largely food insecure India!

Climate Smart Agriculture (CSA) is a cruel joke played on countries like India. The intention is not to boost agricultural production but to decrease it. The sooner this programme with this diabolic agenda is wound up in this country, the better it is for both the country and agencies like Oxfam and ActionAid.

India faces a host of genuine problems like drinking water; housing; sanitation; education; health etc There are more intricate socio-economic problems such as the increasing gap between the rich and the poor; violence on women; child marriages; atrocities on Dalits and Tribals etc. Hence there is absolutely no need to generate any bogus problems to target international development assistance even when there is a plethora of choices for genuine NGO work.  Ignoring this warning is an invitation to self-destruction as it endangers much public goodwill that international NGOs like Oxfam and ActionAid enjoys within this country.

Posted by Rajan Alexander at 1:46 PM