This is one season, so unpredictable that explains the heightened media interest in the monsoon progress. Much has been hyped of the monsoon onset, coming 4 days later than normal. And yet, yesterday, when the monsoon covered the entire country, 4 days earlier than normal, media coverage in contrast had been fairly muted.

As seen in the IMD graph, accumulated rainfall till yesterday noon may appear at first glance near normal”. The actual data presents a more sobering picture. As on yesterday noon, monsoon deficiency stood at a whopping 23%. Such a figure is worrisome, as on one hand key reservoirs across the nation have not received adequate water as considered comfortable. On the other hand, the extremely poor rains in Karnataka and Central Maharashtra can adversely affect the production of coarse grains.

But if you think this a massive deficiency, then consider this.  Less than a week ago, the rainfall deficiency was nearly 50% of average. In a span of just 6 days, the deficiency was cut almost in half. Combine this feat with the fact that monsoon covered the entire country, 4 days earlier than normal and how does the glass now look? You can take your pick. Revival or Mirage?

The unpredictability of weather or climate is so enormous that it really takes the really brave to stick their necks out to venture a prediction. Weather or climate after all is basically chaotic non-linear systems which mean much of their behaviour is through “random walks”. Dr Andy Edmonds in an incisive article entitled “The Chaos theoretic argument that undermines Climate Change modelling” in the blog WUWT observed:

“So, what does it mean to say that a system can behave seemingly randomly? Surely if a system starts to behave randomly the laws of cause and effect are broken?

Chaotic systems are not entirely unpredictable, as something truly random would be. They exhibit diminishing predictability as they move forward in time, and this diminishment is caused by greater and greater computational requirements to calculate the next set of predictions....prediction accuracy will drop off rapidly the further you try to predict into the future.

Edward Lorenz estimated that the global weather exhibited a Lyapunov exponent equivalent to one bit of information every 4 days. This is an average over time and the world’s surface. There are times and places where weather is much more chaotic, as anyone who lives in England can testify.

What this means though, is that if you can predict tomorrows weather with an accuracy of 1 degree C, then your best prediction of the weather on average 5 days hence will be +/- 2 degrees, 9 days hence +/-4 degrees and 13 days hence +/- 8 degrees, so to all intents and purposes after 9-10 days your predictions will be useless.

Of course, if you can predict tomorrow’s weather to +/- 0.1 degree, then the growth in errors is slowed, but since they grow exponentially, it won’t be many days till they become useless again.”

Put simply, the uncertainties accompanying forecasting elections or share market movements pale into insignificance as compared to forecasting weather, particularly so, the monsoons, which remains one the most difficult weather phenomena to predict.  This doesn’t mean that chaotic systems like the monsoon cannot be predicted at all. All it means is that they could be forecasted reasonably accurately at very short time frames and the longer the timeframe, the more inaccurate that they can get.

So what has changed since June? 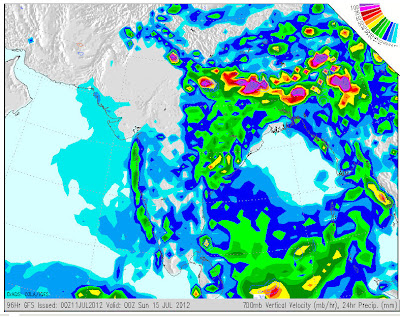 The El Niño critical indices have not only crossed threshold values but intensifying rapidly so much so an El Niño maybe unofficially declared by this month end. The current NINO3.4 being +0.7 deg C and SOI at -10.6. Officially, they can declare an El Niño event only after September end as these indices values need to be maintained for at least 3 months.

How would an El Niño impact the current monsoon? LS Rathore, chief of IMD even yesterday, still ruled out any effect. We totally agree with the IMD’s assessment. Each El Niño is different so is the current one. How different?  Rajesh Kapadia who administers the blog Vagaries of Weather and I decided to team up to write a joint post to be published later this week or sometime next week why we think that the El Nino, even if confirmed, can be expected to only marginally affect the monsoon, if at all.

The Indian Ocean Dipole (IOD) within ENSO (El Niño/La Niña) neutral conditions usually can become a wild card. In May the IOD was weakly negative. In June, many international models indicate it becoming moderately positive. Early this month, the same models suggest a return to neutral mode with a weakly positive bias. Accordingly, there appears no problem with the IOD messing up the monsoon also here.

There is however some confusion about the Madden Julian Oscillation (MJO) another critical variable as different models gives contradictory forecasts. My friend Rajesh Kapadia blogged: “MJO "holding on" till 22nd July.”  Rajesh is a much more seasoned forecaster with plenty of experience than I do and certainly he has meteorology running through his veins.  I however depend on the CPC-NCEP-US model which suggests favourable values till 3rd week end and progressively expected to weaken from then, though not any way unfavourable for the monsoon. Based on my assessment, the MJO is likely not to create any unfavourable conditions till month end, if lucky till mid August.

On the whole, all elements of the monsoon system are at last in place which is why we had very good rainfall last week. Whether it stays that way till September is very difficult to tell but our forecast remains hopeful.

A top IMD official used the analogy of cricket to aptly describe the current monsoon’s progress. He said that we are in the middle (July-August) overs with the openers (June) out cheaply. July-August rains account for 65% of the South West Monsoon rains and absolutely critical for agriculture to avoid failure. Considering the fact that we have a 23% deficiency to offset, from the third week of July to August mid, we need some very big hitting to maintain the required run rate. How this critical period pans out is anyone’s guess. However, the 3rd week July looks extremely promising as if we are very likely to experience the best rains till now for the current season. A couple of sixes and who knows -we maybe down to single digit deficit by July end? And of course August is yet another story, all monsoon forecasters will be keeping their fingers crossed. 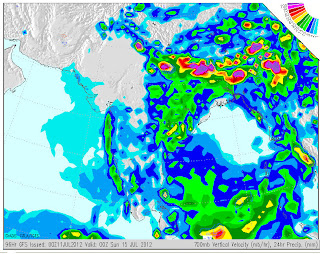 We expect Central parts of the country, the Northern plains to get very good rains next week starting from this week end. We also expect the rainfall activity to increase over peninsular India with a huge chunk of peninsula India’s deficiency to be made up, This though will not succeed  to eliminate the deficiency altogether, as now  being experienced in peninsular India.

Posted by Rajan Alexander at 1:58 PM