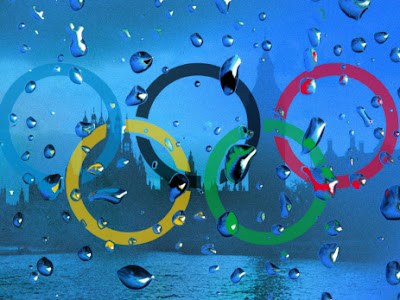 Come 27th July, the London Olympics kick off with its Opening Ceremony. Weather can play a spoiler. The Chinese demonstrated during the last Olympics that they had the technology to even chase away the rain successfully. This time it is different since here it is the British we are talking of!

So what’s the weather like for the opening ceremony? Weather forecasters are divided. On one hand we have the UK Met Office who promises of dry and shiny weather. On the other hand we have Piers Corbyn, astrophysicist and owner of Weather Action who predicts a damp and rainy day. So on the opening day of the London Olympics itself we are fortunate to watch one of the most fascinating duel as a sidelight to the Opening Ceremony.

The Indian Meteorological Department (IMD) has been recently receiving alot of flak for their monsoon prediction going awry. But compared to the UK’s Met office’s track record, they should come out smelling like roses.  The IMD possesses a success rate of 22% which means at least one of four of their monsoon forecasts possess the probability of getting it right. Last year, the IMD even forecasted successfully a rainless day for the Commonwealth Games Opening Ceremony.

In contrast, the Met Office has hardly any success to flaunt though their prediction that global temperatures will rise by 4% by 2100 is extensively used by climate alarmist to generate hysteria. This despite the Met Office possessing the most sophisticated and expensive super-computer on earth. Even more ironical, the Met Office Directors draw a salary even higher than those drawn by UK’s Prime Minister and are thus the highest paid civil servants in the UK. So we can draw some consolation it is not only in India where incompetence is often rewarded. The UK, our former colonial masters leaves us far behind to claim the first prize for this dubious distinction.

Christopher Booker of the Telegraph perhaps best gives us the best graphic description of their incompetence as perhaps only he could:

“First it was a national joke. Then its professional failings became a national disaster. Now, the dishonesty of its attempts to fight off a barrage of criticism has become a real national scandal. I am talking yet again of that sad organisation the UK Met Office, as it now defends its bizarre record with claims as embarrassingly absurd as any which can ever have been made by highly-paid government officials...

The reason the Met Office so persistently gets its seasonal forecasts wrong is that it has been hi-jacked from the role for which we pay it nearly £200 million a year, to become one of the world's major propaganda engines for the belief in man-made global warming. Over the past three years, it has become a laughing stock for forecasts which are invariably wrong in the same direction...

In line with IPCC theory, its computers were programmed to predict that, as CO2 levels rose, temperatures would inevitably follow.” 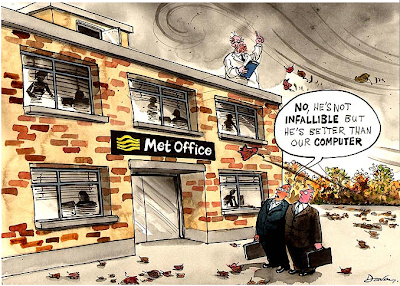 So what makes the Met Office a national joke? Here are some samplers:

-     In 2007, the UK Met Office warned we could see "the warmest year ever", just before global temperatures plunged by 0.7 degrees Celsius, more than the world's entire net warming in the 20th century due to the effect of a super La Niña!  The gaffe provoked headlines like “The Met Office fries while the rest of the world freezes”

-       In 2009-10, the Met Office promised UK a “barbecue summer” which turned into a damp squib as temperatures plunged due to heavy rains. In the event, July was the wettest on record in England and Wales.

-       The 2010-2011 forecast seasons was particularly severe for the reputation of the Met Office, as UK winter which they forecast to be “mild” turned out to be the coldest for over 100 years. This when climate sceptic meteorologists of the likes of Joe Bastardi of AccuWeather; Jonathan Powell of Positive Weather Solutions and Piers Corbyn of Weather Action hit the bulls-eye right. To save themselves further blushes, the UK Met Office gave up seasonal forecast of winter altogether and this is why they gave no such forecast for the winter of 2011-2012. 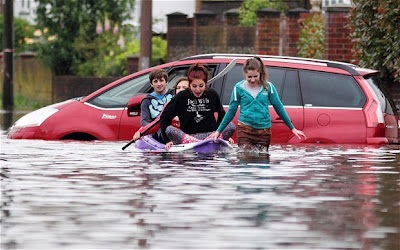 And their list of fumbling appears unending. This summer the Met Office predicted record warmth and droughts (no surprise). Instead what the UK got was the record seasonal cold and worst floods in over 100 years (no surprise here too). It provoked articles as in Times:

“Let us make our position crystal clear: We are against this weather," the venerable newspaper wrote in an unsigned opinion piece. "It must stop raining, and soon."

The Guardian wrote that,

“Met Office spokeswoman Sarah Holland was apologetic, saying in an email that while the weather was disappointing, ‘unfortunately there is nothing we can do about it.’”

“The Met Office has explained that the persistent damp is likely due to a fluke of the jet stream, which normally migrates north of Britain in the summer but, this year, has refused to budge. (Yes, this could be due to climate change.) Instead, it’s hovering over the country, drizzling rain like a shower head in a bad hotel.”

The Met Office’s bête noire is the brillant but eccentric Dr. Piers Corbyn, a meteorologist and climate skeptic. He is the brother of bearded Labour MP Jeremy Corbyn. Piers Corbyn works in an undistinguished office in Borough High Street, London. He has no supercomputer. Armed only with a laptop or a pocket scientific calculator, huge quantities of publicly available data and a first-class degree in astrophysics, he gets it right again and again. His short term forecasts i.e. below 7 days has nearly a 100% success rate; medium term forecasts i.e. below a month a success rate of 85% and long term i.e. above one month forecasts has a success rate of about 60%. Head to head against the Met Office, Corbyn has nearly a 100% success rate.

The Jetstream, the bad guy of Britain's washout summer, is heading back north, raising hopes of warmer, sunnier weather just in time for the Olympic Games.

The soggy weather system, which normally flows to the north of Scotland, has been sitting over southern England for the past three months, bringing virtually non-stop rain with it.

New data from the Met Office suggests the situation is changing, however, and by Saturday the jet stream will be closer to where it belongs.

The retreat of the jet stream will allow a ridge of high pressure to exert its influence over southern parts of England, bringing warmer, sunnier weather. Northern and western parts are out of luck, however. They will experience what the BBC calls "changeable" weather.

The change in the jet stream means the Olympics, which start on 27 July, may avoid the washout which everybody thought was inevitable.

The BBC, which uses Met Office data, predicts for the week of Monday 23 July- Sunday 29 July: "Changeable conditions will continue into the following week. However, there are now signs that the unsettled weather will become more focussed towards northern and western parts of the United Kingdom. This will result in drier, more settled conditions in the south with some brighter, warmer weather."

Rain isn't exactly rare in London this time of year.  The average August in London receives just under two inches of rain. London just set a record for the wettest June on record, and July is off to a wet start.

Many events won't be impacted by the rain. Swimming, diving, basketball and gymnastics all compete indoors.

However, track and field events can quickly change in the rain. Field sports like hockey, rugby sevens (demonstration sport until 2016) and football/soccer become different, and sailing can be downright dangerous in poor weather.

Beach volleyball is one of the events that would be most impacted by weather. Even though players are accustomed to dealing with "the third player," rain and wind do take away some of the advantages of the better athletes.

So good times ahead. The first competition for the London Olympics starts tomorrow, the Opening Ceremony - the weather forecast competition.

What is going to transpire?

Can a bloke beat the super-computers of the UK Met Office with a laptop?

Posted by Rajan Alexander at 7:05 PM