WWF boots out King Carlos of Spain for hunting 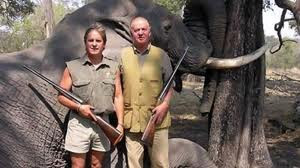 Wrong. It’s all about snuffing of life, whether human or animal. Here’s the snap shot of King Juan Carlos last year in Botswana and proudly displaying his trophy - an endangered African elephant shot dead at point blank range by him!

King Juan Carlos of Spain's secret passion for hunting has cost him his title as president of the country's branch of the World Wildlife Fund.

The monarch has held the position since 1968, but he has been ousted after news broke he made a secret trip to Botswana in April to hunt elephants.

The organization added in a statement that 'although such hunting is legal and regulated" it had 'received many expressions of distress from its members and society in general.'

It said members voted at a meeting Saturday in Madrid to 'to get rid of the honorary President' by a substantial majority of 226 votes to 13. 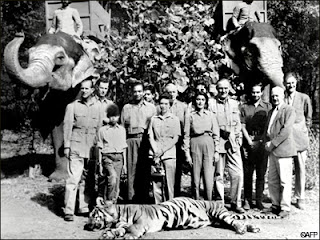 Lest you consider King Carlos an aberration, take a look at the snap above. The first and the longest serving President of the WWF, Prince Philip of Windsor House of the UK after a good hunting trip in India.  Here Prince Philip stands next to the tiger he shot. The WWF now tells us that the tiger is an endangered species in India and through striking alliance with news channels like NDTV had hyped their Save the Tiger campaign. They expect us to conserve tigers so that their biggies have adequate game to  satisfy their blood thirsty cravings.. 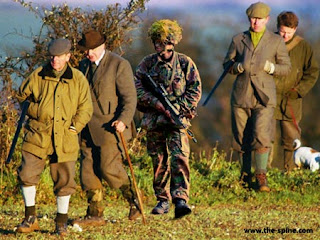 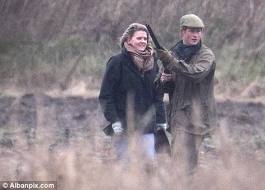 Remember, the WWF-IUCN is the ring leader of the climate scam. They are also the primary authors of Climate Smart Agriculture (CSA) being implemented in India by international NGOs like Oxfam; ActionAid; ChristianAid; CARE; Greenpeace etc which aims to cull the Indian population by causing famine and starvation deaths through reducing agriculture yields in the country.

The World Wildlife Fund (also known as the Worldwide Fund for Nature, or simply WWF) has been actively pressuring government agencies in the U.S., Europe, and Canada to increase the amount of testing that they require for pesticides and other chemicals. The WWF was the driving force in pressuring the U..S.. Congress to legislate the screening of chemicals for "endocrine (hormone) disrupting" effects and has subsequently been heavily involved in establishing the framework for the Environmental Protection Agency's (EPA) massive chemical-testing program now under development. . As its Web site points out: "WWF invested substantial resources in the EPA's Endocrine Disruptor Screening and Testing Advisory Committee," which "agreed upon a set of tests to form the foundation for the screening and testing program.."

What the WWF neglects to mention, however, is that 10 of the 15 recommended screens and tests are animal-poisoning studies, some of which kill hundreds or thousands of animals at a time.. According to scientific estimates, the WWF-backed endocrine testing program will kill up to 1..2 million animals for every 1,000 chemicals tested, and with environmental organizations pressing for tens of thousands of chemicals to be retested under this program, the toll in animal suffering and death will be staggering.. The WWF is also pressuring government agencies in Europe to embark on a similar animal-testing program. In addition to lobbying for more chemical testing, the WWF has teamed up with Procter & Gamble, S..C.. Johnson, and other chemical companies to create an institute to pursue "basic research" on endocrine disruptors.. On top of this, the WWF is now pushing the U..S.. Congress to pass a bill that would pour additional millions in public funds into endocrine research--much of which would likely be used to fund experiments on animals.. Unfortunately, the "endocrine disruptor" issue is not an isolated example.. The WWF has been a major force in pressuring the European Union to amend its Chemicals Policy to require companies to test and retest as many as 30,000 new and existing chemicals.. The British Institute for Environmental Health estimates that this process will kill upwards of 45 million animals if the standard battery of animal-poisoning tests is used..

The WWF's U..S.. and Canadian offices are also calling for more testing of pesticides, despite the fact that more than 9,000 animals are already killed for each pesticide product on the market.. The organization has called for certain pesticides to be tested for "developmental neurotoxicity" (DNT) using a test that kills upwards of 1,300 animals each time it is conducted.. This test has been heavily criticized by scientists, including the EPA's own Scientific Advisory Panel, which concluded that "the exposure of rat fetus/pups was not shown to be equivalent to human fetus/infant during equivalent stages of brain development" and that "the current form of the DNT guideline is not a sensitive indicator of toxicity to the offspring.." In other words, WWF is calling for thousands of animals to be killed in a test that scientists admit is not relevant to humans! In its defense, the WWF says that "in the absence of effective, validated alternatives, WWF believes that limited animal testing is needed for the long-term protection of wildlife and people throughout the world.."

However, there is nothing "limited" about the massive amount of animal testing that the WWF is endorsing.. Dr.. Joshua Lederberg, Nobel Laureate in Medicine, pointed out in 1981: "It is simply not possible with all the animals in the world to go through chemicals in the blind way we have at the present time, and reach credible conclusions about the hazards to human health.."

The WWF Endorses the Killing of Wild Animals, Too!!!

The World Wildlife Fund (WWF) gives special meaning to the word "conservation. ." The organization, founded in 1961 by a group of wealthy trophy hunters, apparently believes that conserving animals means keeping them around long enough for well-heeled "sportsmen" to blast them out of the woods, oceans, skies, plains of Africa, and jungles of Asia.. Past WWF chapter presidents include C..R.. "Pink" Gutermuth, who also served as president of the National Rifle Association, and trophy hunter Francis L.. Kellogg, who is legendary for his massive kills.. In its early days, the WWF even used fur auctions to raise funds...

Since then, the WWF has learned that most people are appalled by hunting and trapping, so today, the organization veils its true stance under phrases like "sustainable development, " arguing that killing is acceptable under some circumstances. . When answering difficult questions about its policy on hunting, trapping, and whaling, the WWF is careful never to state outright that it approves of all these activities.. But don't be fooled, the WWF's intentions are all too clear and deadly!!

According to the Web site of the WWF's Canadian office, "WWF is not an animal welfare organization. . We support the hunting and consumption of wild animals provided the harvesting does not threaten the long-term survival of wildlife populations. . WWF has never opposed a sustainable seal hunt in northern or eastern Canada.." However, despite the WWF's portrayal of the situation, the Canadian seal hunt is anything but a "subsistence" hunt--it is the largest slaughter of marine mammals in the world.. Quotas established by the Canadian government have soared to an all-time high: 350,000 seals per year for the next three years.. Not since the mid-1800s, when unrestricted slaughter saw a million seals per year killed, has so much blood been shed on the ice off Canada's East Coast...
Worse is that the Canadian government has stated in internal documents that having the WWF's support for any raise in seal quotas is important, and the WWF's position statement suggests that it had been working with the Canadian government before the quota was announced.. In other words, the WWF had the power to help avert the largest quota of harp seal pups in history but chose, instead, to let it happen without so much as a word of opposition!! !
Whaling!!!

While the WWF states that it opposes "commercial whaling," it does support the slaughter of whales by native tribes and under some other conditions.. When asked directly about its policy, WWF is vague, stating: "WWF's views on whether sustainable whaling should be permitted derive from its mission 'to conserve nature and ecological processes and to help build a future in which humans live in harmony with nature..'" In the past, WWF officials have clearly stated that "WWF International has the national WWF organizations behind it in the view that as soon as one can ensure a sustainable commercial harvest of the great whales under secure international control, then whaling will no longer be a WWF concern...."

As one would expect of an organization founded by hunters, the WWF does not oppose the slaughter of animals with guns and other weapons for sport.. Rather than working to stop the killing, the WWF believes that hunting should be regulated, arguing that wealthy trophy hunters can bring income to poorer nations.. The WWF claims that it has no power to stop hunting, stating, "The decision to allow trophy hunting is a sovereign one made entirely by the governments concerned. -- We will continue to monitor governments' enforcement of important trade laws to ensure that trophy hunting is done within the legal standards of that area...."

The WWF believes that culling--another way of saying "killing"--elephants is acceptable, as is the trade in ivory, because the profits that it brings spur governments to keep elephants from going extinct.. In 2000, U..S.. News & World Report reported that WWF representatives traveled to Nairobi to ask the United Nations to lift the ban on the ivory trade in order to allow a "sustainable harvest of ivory for horns and hunting trophies..."


The WWF's bizarre view--that we must kill some animals now in order to save animals to kill later--has proved false time and again.. The trade in ivory has only encouraged rampant poaching, the senseless slaughter of elephants.. The WWF tries to duck the issue by falsely stating, "The decision to cull, or to select animals from the herd for removal or death, is indeed an agonizing choice, but it is one made entirely by the governments concerned and there is no international involvement in those decisions.."

As with hunting and whaling, the WWF refuses to condemn the massive killing of animals with steel-jaw leghold traps.. While calling itself a "preservationist" organization that "seek[s] to be the voice for those creatures who have no voice," the WWF stands back from the issue, stating that "the trade in furs, skins, and other products of animals that are not endangered isn't the focus of our campaign.."
But no matter how hard the WWF tries to "greenwash" its support of animal slaughter, its real message rings out loud and clear: Animals are ours to hunt, trap, kill, poison, and use as we see fit.. And although appeals to preserve genetic diversity, ecosystems, and the planet sound good on paper, they mean little if what the WWF is really advocating is more efficient killing fields...

Despite an ongoing international tourist boycott that was called in response to the wolf "control" program in Alaska, in which at least 100 wolves have been shot as of March 2004, the WWF is promoting several trips to Alaska throughout June, July, and August 2004 as part of "WWF Travel," an "ecotourism" program.. When asked why the WWF was sending its members to Alaska, effectively undermining efforts to save wolves in the state, the WWF travel desk representative stated that the WWF did not consider the matter of wolf-killing a priority..

WHAT YOU CAN DO?


Please write to the WWF and express your opposition to its involvement in the slaughter of millions of animals and their blood thirsty policies aiming to cull both human and animal life
Write to the Indian Trustee of Nitin Desai of WWF-India, Advisor to Prime Minister’s Committee on Climate Change here: nitin-desai@hotmail.com