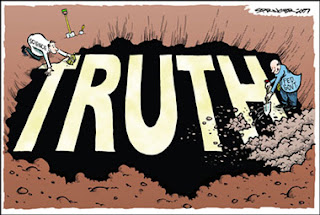 "Understanding how the South Asian monsoon will change in response to global warming and resolving the uncertainties in projected changes are ‘demanding tasks’ for climate science.”

The extract is from a study published in the 24th June issue of the journal, “Nature Climate Change” - a sister journal of the world's  most cited scientific journal - Nature. The study had been authored by Andrew Turner, National Centre for Atmospheric Science-Climate, University of Reading and co-authored by Hari Subramaniam Annamalai, International Pacific Research Centre, School of Ocean and Earth Science, University of Hawaii.

If we were to go by Oxfam’s policy document - Growing Better Future or ActionAid’s - ‘On the Brink  or the ICRIER-Gene Campaign Policy Paper 16: 'Impact of Climate Agriculture & Food Security', all based on the so called Climate Smart Agriculture (CSA) paradigm, we can’t be faulted to be left with an impression that CSA is a magic wand wherein all solutions are known and further these NGOs have actually the in situ capability to translate these into action!

But wait a minute. What did this new “Nature Climate Change” study actually find? Let’s read their opening sentence once again:

“Understanding how the South Asian monsoon will change in response to global warming and resolving the uncertainties in projected changes are ‘demanding tasks’ for climate science.”

Translated:  Present “climate science” have  no clue of monsoon behaviour” because uncertainties are so huge that makes its prediction highly challenging!

If this being the case, how climate smart can these NGO agricultural solutions be?

So on what basis has the Nature Climate Change study made such a conclusion? This is what is given as an explanation:

But, variations within each season, over timescales of a few days or weeks, often have large impacts on agriculture or water supply...

"Perhaps the single biggest scientific challenge is in understanding monsoon variability at intra-seasonal timescales (several weeks), the so-called active and break events in the monsoon, and how they will change in the future"...” 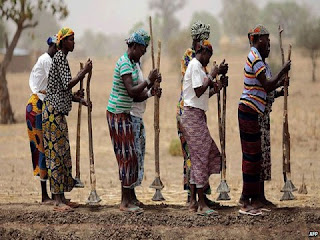 A few days ago, IndiaToday interviewed my Facebook pal, G.V. Ramanjaneyulu, Executive Director of Hyderabad, based Centre for Sustainable Agriculture (CSA) on the issue of the monsoon playing truant. And this is what  Ramanjaneyulu expressed as the problem during this interview:

I wrote back cheekily perhaps he should target his ire at NGOs like Oxfam, ActionAid or Gene Campaign, as only they could audaciously claim they were climate smarties and not government agencies like the Indian Meteorological Department (IMD). I added that in the past farmers used to give specific names to weekly rainfall according to which they took decisions what crop and variety to plant. Thus in the past these decisions were made on the basis of soil fertility; irrigation potential and monsoon behaviour. Now the same decisions are driven by market or profit maximization impulses which makes monsoon forecasting, as difficult as it is, a prerequisite for climate smart agriculture.

But NGOs instead of developing monsoon forecasting skills choose to belittle the IMD’s chequered forecasting track record. Take for example Devinder Sharma who pompously projects himself as an International  Food Security Analyst in an article a couple of days in the Deccan Herald wrote:

“In 2009 when India was faced with one of its worst droughts, the monsoon forecast was for an 'almost normal' rainfall season.

You must have heard of the meteorological department’s monsoon forecast. It promises to be a near normal monsoon season from June-September with rains expected to be 98 per cent of the long period average with a 5 per cent variation.

But if you are a farmer, keep your fingers crossed. Instead of depending on the first monsoon forecast that was given out in April, I suggest you keep on praying before rain gods to be kind to you. Pray with folded hands that the rains do not deceive you once again as it did two years back in 2009. You haven’t yet recovered from the economic distress that the 2009 drought had inflicted, and if the monsoon fails again you will be in dire straits.”

By the same logic we can ask votaries of CSA such as Devinder Sharma, how then can they claim that their agriculture practices are climate smart even when they are unable to forecast monsoon behaviour. This trait cuts across all foreign funded NGOs. All pretend climate smartness even when they have no clue on how the monsoon will behave. If the IMD’s wrong monsoon forecasts can hurt farmers bad, even more so agricultural practices that are not aligned with monsoon behaviour, even if they are foolishly assumed as being so.

But it is the same GCM models that predict that global temperatures will increase 4-8 deg C by 2100, the primary problem that CSA bases itself to address.  If the GCM model is unreliable for seasonal forecasts, how then is it considered reliable for a 100 year forecast? The “Nature Climate Change” study concludes:

“Models linking monsoon responses to global warming suggest a rise in monsoon rainfall, but there is a high degree of uncertainty in these projections. Observations from data sets from most areas indicate a declining trend or no change in monsoons, contrary to the projected rise.”

Climate is average weather for a period now taken as 30 years. Now if a model cannot predict this season’s monsoon, how climate smart can be the solutions based on such models? Rather than finding appropriate solutions to a changing climate, all these NGOs have to offer are standardized solutions which are assumed as being appropriate for whatever directions the climate shifts! And they call this illogical outlook - “Sustainable Development”!

So next time you hear a foreign funded NGO staff waxing eloquent of CSA, you should now be able to recognize them for what they really are - either imbecile idiots parroting lines that they have no clue about or just sleek PR artists aiming to con you!

Posted by Rajan Alexander at 2:08 AM