How Indian Farmers Beat the Climate: The Hard Data


My pal, Barun Mitra, Executive Director of the New Delhi based, independent think tank, Liberty Institute, recently presented a paper in an international conference in France entitled “Indian Agriculture, Property Rights & Impact on Agriculture and Forestry”. From the hard data he complied, it is established beyond doubt that the claim that “Climate Change” has adversely impacted Indian agriculture is just a bogey by foreign funded NGOs and their agents in the country pursuing an eco-imperialistic agenda. All graphics in this post is taken from Barun’s power point presentation.

History of Droughts in India 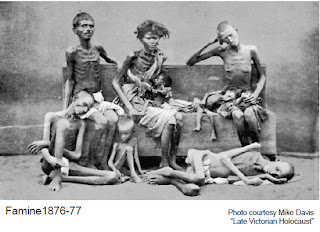 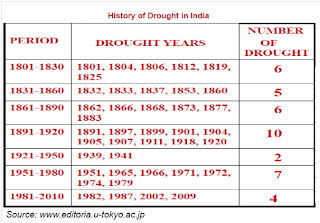 The data shows that droughts are no means a new phenomenon as climate alarmists portray; with the first recorded history of drought going back to 976 AD. During the last 200 years, the highest frequencies of drought were during the period 1891-1920. The frequency of droughts during the last 30 years viz 1981-2010 was the second lowest within a tri-decadal scale. Ironically, the hysterical climate campaigns by foreign funded NGOs and environmental groups succeeded in instilling in the minds of common Indian citizens, the spectre of increasing droughts even when it was decreasing. That’s the power of their disinformation campaign. 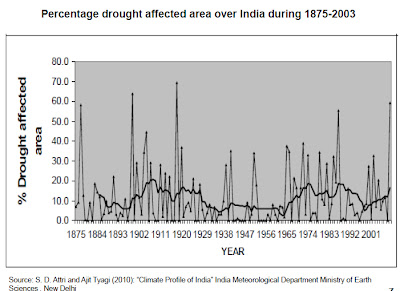 The data shows that area affected by droughts shows no significant trend. Yet, foreign funded NGOs and environmental organizations’ campaigns create an impression that “desertification” is demonstrating a runaway growth contradicting data! Once again it demonstrates the efficacy of their disinformation campaign. 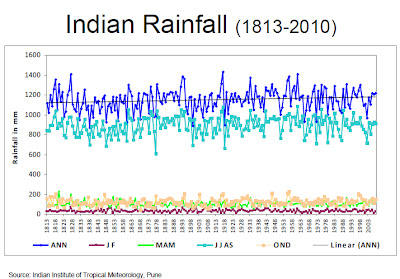 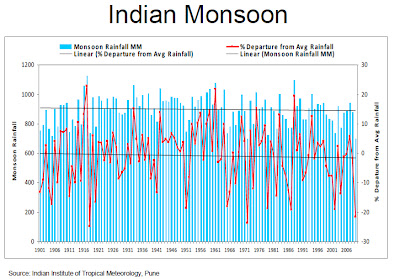 The UN Intergovernmental Panel on Climate Change (IPCC) models predicted that on account of rising global temperatures, rainfall in the country will increase. What almost 200 years of rainfall record instead shows is that the mean rainfall pattern being highly stable, if not slightly decreasing. 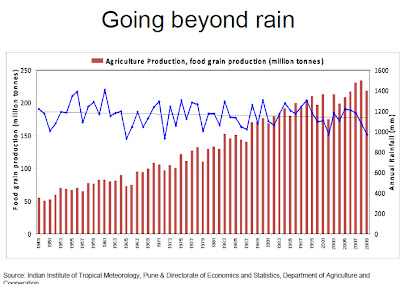 This graph punctures the claims of the so-called Climate Smart Agriculture (CSA) that climate change is detrimental to agriculture and that Indian farmers have no capacity to adapt to climate changes. Even as the country experienced decreasing mean rainfall, agriculture production boomed nearly four folds from the time of Indian Independence!

Small increases in irrigation can generate big impact in yields 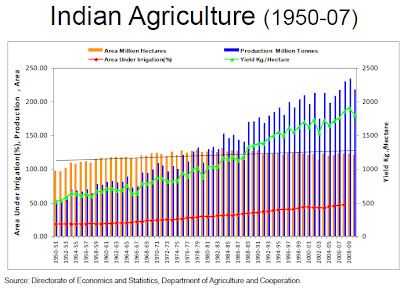 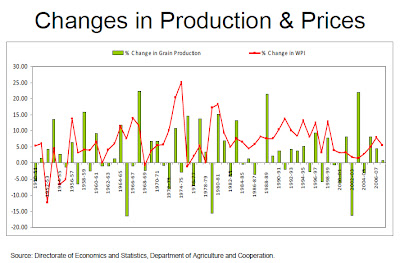 Climate alarmist claims that high food prices are linked to climate change. But take a look at the graph. A 60 year timescale shows that the Wholesale Price Index (WPI)  has no correlation with either food grain production or global temperature rise.  The WPI in fact spiked most in the late 70s and thereafter significantly softened. Between 1987 and 2004, monthly expenditure on food had declined from 64% to 54% in rural households, and from 56% to 42% in urban households.

Despite this, our agricultural productivity as compared to global standards is still fairly dismal. Climate Smart Agriculture wants us to put a stop to big irrigation projects on one hand and on the other hand switch from inorganic to organic agricultural practices.

There is nothing wrong with organic agriculture per se. It is one form of agricultural production system perhaps containing many elements that are ecologically more beneficial. However, because of their lower yields, it rules itself as a solution to catapult our agriculture to higher global productivity standards. Switching to organic can instead lower our current productivity standards by at least 30%, creating a food crisis within the country and triggering a spike in global food prices, as a food deficient India goes big on reliance on the global food market to make up their shortfall.

Organic produce command a market premium and as such it find its way to either urban affluent pockets within our country or export markets, the only segments who can afford the premium. In fact, most of our organic products are exported out of our country. There is nothing wrong per se with exporting organic foods but land that can be used to feed our people is diverted to economies having already agricultural surpluses. Organic agriculture is all about production of quality food though this claim is hotly contested. In a country of 1.3 billion people, we can only think quality only after ensuring adequate quantity of food is available for our people. Accordingly, it rules itself out as an option to feed our people.

Similarly, only large-medium size irrigation projects can play a significant role in reducing agriculture vulnerability to truant rainfall. When rains fail, area under cultivation falls corresponding to the rainfall intensity as it is happening this year. The farmers who are forced to take up involuntary crop holidays are those who depend essentially on rainfed agriculture. Invariably, it is the rich farmers who possess irrigated holdings and the poor who are dependent on rainfed agriculture. CSA which advocates rejection of large and medium irrigation projects is accordingly a pro-rich and anti-poor ideology though packaged as a pro-poor, pro-development solution.

So what’s the hidden agenda of CSA?

For the Rio-20 summit, WWF produced a document that advocated that that economic growth should be abandoned, that citizens of the world should prepare for poverty. Devinder Sharma another votary of CSA in his blog Ground Reality expressed similar sentiments in his post: Good news: World is getting into a recession again:

“Finally the cheering news. Swaminathan Aiyar, the cheerleader for economic reforms, which in reality is a euphemism for privatisation, has admitted that the world is sliding into a new recession...

In my understanding, there can be nothing more cheering than the news that world is sliding into a new recession. At a time when global warming is taking the world closer to the tripping point; when the oceans and air have been tremendously polluted, the groundwater ruthlessly mined and contaminated, and the natural land resources exploited to the hilt, the news of an impending economic recession couldn't have come at an more appropriate time.”

So here is the agenda openly flaunted? They no longer find the need to even camouflage this nefarious objective.

“The biggest problems are the damn national sectors of these developing countries. These countries think that they have the right to develop their resources as they see fit. They want to become powers.´´ --Thomas Lovejoy, vice president, World Wildlife Fund U.S.A., 1984.”

“In searching for a new enemy to unite us, we came up with the idea that pollution, the threat of global warming, water shortages, famine and the like would fit the bill…. But in designating them as the enemy, we fall into the trap of mistaking symptoms for causes. All these dangers are caused by human intervention and it is only through changed attitudes and behavior that they can be overcome. The real enemy, then, is humanity itself.” –Club of Rome, The First Global Revolution, 1991

"Instead of recommending cleanliness to the poor, we should encourage contrary habits ... we should ...crowd more people into the houses, and court the return of the plague. ... But above all, we should reprobate specific remedies for ravaging diseases; and those benevolent, but mistaken men, who have thought they were doing a service to mankind by projecting schemes for the total extirpation of particular disorders. If by these and similar means the annual mortality were increased from 1 in 36 or 40, to 1 in 18 or 20, we might possibly every one of us marry at the age of puberty, and yet few be absolutely starved." -Thomas Malthus, The Essay on Population, 5th edition, 1817.

Posted by Rajan Alexander at 12:14 AM