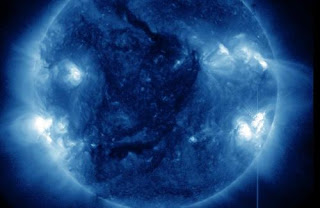 The sunspot group, AR 1520, released a strong solar flare and coronal mass ejection (CME). The X1.4 class solar flare is in the most energetic class of solar flares. The CME was also aimed directly at Earth. NASA's Goddard space weather laboratory predicts that the CME will strike Earth's magnetic field at 5:17 am EDT on Saturday July 14. This prediction has an uncertainty of plus or minus 7 hours, depending on the exact speed of the CME.

A solar flare is a sudden brightening observed over the Sun's surface or the solar limb, which is interpreted as a large energy release of up to 6 × 1025 joules of energy (about a sixth of the total energy output of the Sun each second or 160,000,000,000 megatons of TNT equivalent, over 25,000 times more energy than released from the impact of Comet Shoemaker–Levy 9 with Jupiter). These are not visible from Earth's surface. They are mainly followed by a colossal coronal mass ejection also known as a CME. The flare ejects clouds of electrons, ions, and atoms through the corona of the sun into space. These clouds typically reach Earth a day or two after the event.

A solar flare occurs when magnetic energy that has built up in the solar atmosphere is suddenly released. On the Sun’s surface are huge magnetic loops called prominences. When they touch, they short circuit each other, setting off explosions. The amount of energy released is the equivalent of millions of 100-megaton hydrogen bombs exploding at the same time! A solar flare contains high energy photons and particles, and is released from the Sun in a relatively short amount of time.

The sun is currently in the midst of an active phase of its 11-year solar weather cycle. The current cycle is called Solar Cycle 24 and is expected to peak in 2013. And whenever the solar cycle approaches its maxima sunspots and flares increase temporarily. The frequency of occurrence of solar flares varies, from several per day when the Sun is particularly "active" to less than one every week when the Sun is "quiet", following the 11-year cycle (the solar cycle). Large flares are less frequent than smaller ones. 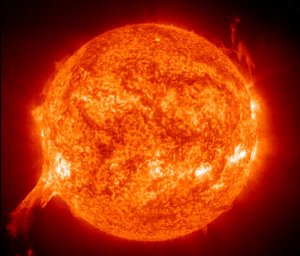 The factor most likely to lead to geomagnetic storms from this flare is the direction of the Coronal Mass Ejection (CME). Sunspot group AR 1520 was near the middle of the Sun's Earth facing side when the flare erupted. Hence the CME was aimed nearly directly at Earth, making it very geoeffective. That means it will interact with Earth's geomagnetic field and very likely cause aurora activity and other effects of minor geomagnetic storms.

Massive solar flares are sometimes associated with CMEs which can trigger geomagnetic storms that have been known to knock out electric power for extended periods of time. According to Matthew Stein, many hundred thousands of miles of high voltage lines would act like an antenna drawing the electro-magnetic pulse from a solar flare toward thousands of transformers on the world's power grids. Many transformers could burn out and be difficult to replace.

Interactions between the CME and Earth's magnetic field cause the aurora borealis (or aurora australis in the southern hemisphere), which is also known as the northern lights (or southern lights).

By all accounts, the sunspot group AR1515 is enormous. It stretches across 118,681 miles (191,000 kilometers) of the sun's surface, making it longer than 15 Earths set end to end, NASA solar astrophysicist C. Alex Young told SPACE.com today before the new flare. The CME’s arrival at Earth will likely spawn moderate to severe geomagnetic storms, which may cause temporary disruptions to GPS signals, radio communications and power grids, these scientists said.

Renowned climate sceptic and astro-physicist, Piers Corbyn who runs the weather forecasting unit, Weather Action had advance put out a red alert on account of intense solar events disrupting even settled weather across the globe all through July.

Solar flares are also speculated as causing major earthquakes and volcanoes though hard scientific evidences are lacking. But the "coincidences" are astonishing. For example March 9th last year there was a very powerful solar flare and within three days the following were the unusual happenings:

However opinion varies.The last time a solar storm hit the Earth, many airlines had to reschedule their flights. In several cases a few airlines even cancelled their scheduled flights. NASA scientists who have kept a close watch on the numerous flares emanating from Sun, have concluded that this time solar flare may neither affect flight schedule or affect electricity supplies in any part of the world.

Jeffrey Hughes, director of the Center for Integrated Space Weather Modeling at Boston University says that I think we just lucked out. It just didn’t pack as strong a magnetic field as we were anticipating. but we may not be as lucky in the days to come. Forecaster Joe Kunches at the US Space Weather Prediction Center in Colorado is one of these:

“We don’t see any ill effects to any systems.  There’s a bright side to stormy space weather: It tends to spawn colorful northern lights as the charged particles bombard Earth’s outer magnetic field. Shimmering auroras may be visible at the United States-Canada border and northern Europe this weekend"

Earlier today, space weather officials warned of more potential flare-ups from sunspot AR1515. The sun has been undergoing substantial activity this entire week from several sunspots on its Earth-facing side.

Posted by Rajan Alexander at 1:48 PM