Indian Monsoon July Forecast: A more hopeful 1st half and a totally dismal 2nd half for rainfall 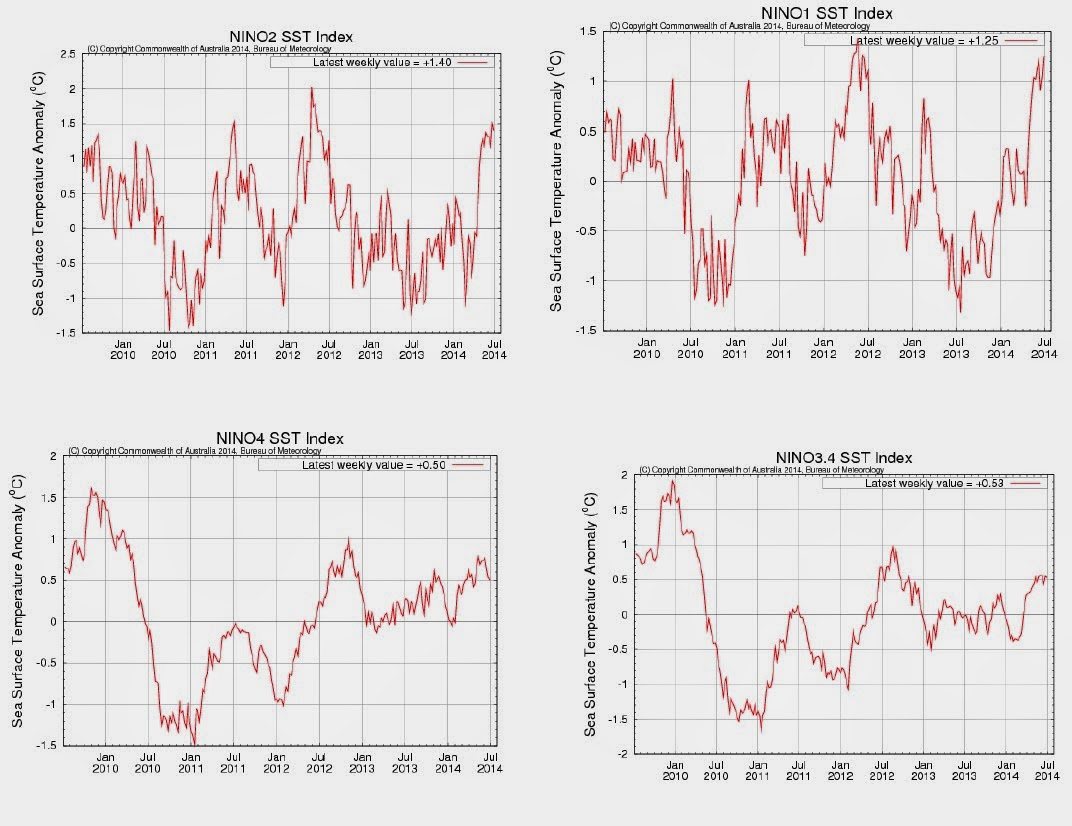 The last weekly values of the sea surface temperatures (SSTs) in the Nino monitoring area are indicating they are gathering steam again after choking in June.

The real problem for the emergence of an El Nino this year was however the lack of coupling between El Nino like SSTs and atmosphere with the Southern Oscillation Index (SOI) remaining La Nina like. But this has changed during June and its present value is strongly El Nino as seen above. These changes would need to persist for several weeks in order for an El Niño to become established. But presently it signals the emergence of a weak to moderate El Nino. 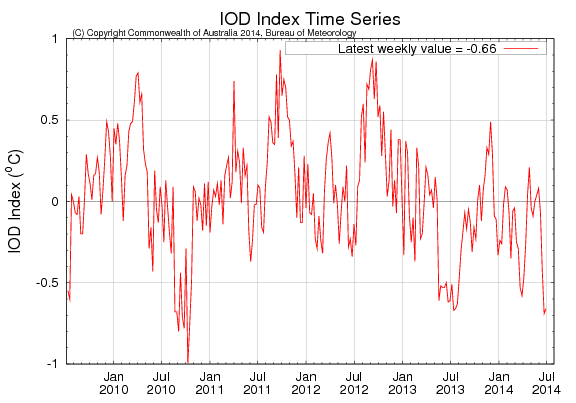 The Indian Ocean Dipole (IOD) turning negative perhaps holds more adverse effect than the El Nino effect.. But both phenomena combining can create an effect of a strong El Nino that could stall the monsoon big. The present value of the IOD is minus 0.66 deg C. 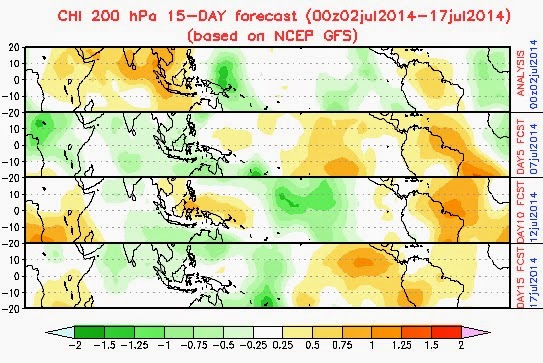 The Madden-Julian Oscillation (MJO) can be characterized as an eastward moving 'pulse' of cloud and rainfall near the equator that typically recurs every 30 to 60 days.


According to Australia’s Bureau of Meteorology BOM model the MJO does not look too bright for rainfall in India:

Climate models indicate a spread of likely scenarios possible for the strength and movement of the MJO over the next two weeks, which suggests there is considerable uncertainty in this week's MJO outlook. Some models indicate the MJO will weaken further and become indiscernible, making it unlikely to influence tropical weather. Other models indicate the MJO will gain strength in the tropical northwest Pacific/southeast Asian region later this week, remaining slow moving in the region over the next fortnight. This scenario would likely act to enhance tropical weather in the northwest Pacific/southeast Asian region and raise the risk of tropical cyclone development, while continuing to supress activity over the tropical Indian Ocean."

The US NOAA model however paints a more positive picture for India with 7-17 July the country experiencing moderate but widespread rainfall.  But the HinduBusinessLine proffers a possible caveat:

“This is also the time around when the ground will have been prepared for the initiation of a cyclone/typhoon in the north-west Pacific, east of the Philippines. These models hinted that a preparatory low-pressure area may take shape by the weekend. It would go on to become a strong typhoon in the East China Sea. The system would concurrently become the prominent feature in the entire Asian monsoon system and would start pulling in flows from the Arabian Sea.

These flows would be dragged into place over the West Coast first, before residual flows are hauled over peninsula, south Bay of Bengal, and onward into South China Sea/north-west Pacific.

Heavy to very heavy rain is likely over the West Coast right from Konkan-Mumbai down to north Kerala during the next week, according to a US Climate Prediction Centre.”

First half of July looks slightly better than June. The period 7-17 July looking relative productive in terms of rainfall, irrespective whether a typhoon develops as forecasted by US models. This scenario only flatters to deceive as around the 17, the monsoon is expected to go back to its slump. An intensifying El Nino accentuated in its effects by a moderate to strong negative IOD and aided by a weakened MJO paints 2nd half of July a picture of dismay for the Indian monsoon.

Posted by Rajan Alexander at 12:45 AM