The very fact that the IMD has to keep on reiterating every day that it may be too early to panic suggest that the spectre of drought is increasing as a strong probability, if not prevailing already.  While there is much merit to IMD’s argument that the seasonal rainfall may in the end turn out not very far from their revised forecast of 93% of LPA, with July-Sept making up for the June deficiency, even so, there is every reason already to panic, at least on the agricultural front.

Sowing may be delayed but we have a sowing window up to July 15 for crops like soybeans, peas, corn and sorghum. A prolonged dry spell could reduce crop yields and cut returns for farmers, many of whom take on debt to buy seeds and fertilisers. This could force a good section of farmers to skip the summer-sown crop.

What's more clear is that agriculture is most likely going to turn in a fairly high negative growth rate and this is going to be a big drag on the overall economy besides fuelling food inflation big time this year. Time is running out very quickly, and if there isn’t a revival of sort by end of this week, we should see an official drought declaration by end of this week. So the question remains whether both the IMD and Modi Sarkar be still in the denial mode as this interview with the Economic Times show. Should they not instead preparing the nation to face hard times? 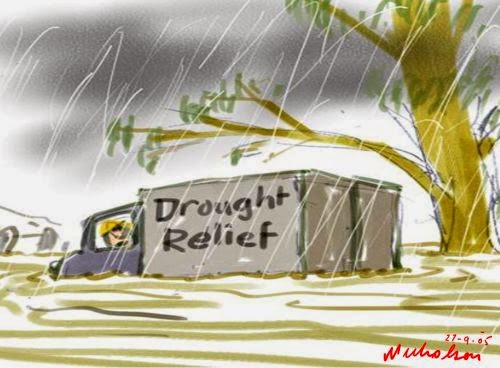 (Madhvi Sally, EconomicTimes) India's weather office remains hopeful that rainfall can revive in July and August, the wettest phase of the four-month monsoon, shrugging off the increasing number of warnings from foreign and private forecasters that chances of a drought have increase in the season that already has a 43 per cent rain deficit since June 1.

The India Meteorological Department (IMD) feels it's too early to panic as crops such as cotton, paddy, oilseeds and pulses can be sown until the middle of July.

said D S Pai, Director (Long-Range Forecasting Division) at The India Meteorological Department. He said that July and August rains were expected to be better than June which could change the monsoon pattern.

"There have been time when even after recording deficient rains in June and July, monsoon activity has picked up in the second half. This happened in 1983,"said Pai.

"It will be a cause of concern for me if there is a dry spell in July, after farmers go for sowing and transplanting. They will again then have to invest in land preparation, seed, fertilizers etc," he said.

Private forecaster Skymet on Friday,said chances of a failed monsoon had risen to 60 per cent from 25 per cent. According to them the regional distribution was even more alarming, with 80 per cent chances of drought in Northwest India, 75 per cent in Central India and 50 per cent over South India.

In June, the IMD forecast that India would get 93 per cent of its average rainfall this monsoon. It noted the threat of the El Nino phenomenon lowered its estimate of seasonal rainfall from its April prediction that rainfall would be 95 per cent of average.

As per India Meteorological Department, the monthly rainfall over the country during the critical month of July is likely to be 93 per cent of the average and 96 per cent during August with a model error of plus minus 9 per cent said the met department.

The water levels in the 85 important reservoirs in the country was as on July 3, was 39.32 billion cubic metre, 25 per cent of their total storage capacity as against 29 per cent capacity a year ago)according to the Central Water Commission.