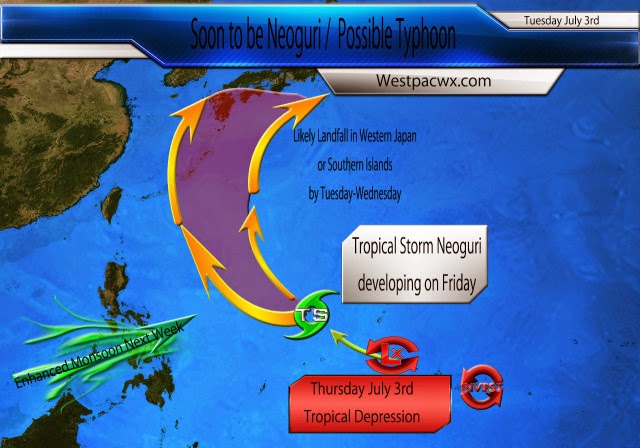 (WesternPacificWeather.com) Tropical Storm Neoguri has been officially named by JMA on Friday to the south of Guam. This storm systems poses to be the first typhoon to make a direct impact on land areas for the 2014 typhoon seas. Those in Okinawa and the southern Japanese islands should track this storm system and plan accordingly as it tracks north-west through the weekend.

Guam at this time has issued a slew of high surf and marine warnings Friday. Many in Guam will be celebrating the 4th of July Holiday Friday and wanting to head out to the beach being at risk for dangerous surf and rip currents as the storm moves to the west. I would recommend to wait until conditions improve through Saturday and Sunday as the storm tracks north west along the southern periphery of the westpac high positioned to the north. A reported from the Guampdn states

“There are a lot of fallen tree branches on the roadways. Flooding may occur in low lying areas. Do not approach any down power lines immediately call 911. GPA has their crews working to replace lines,”

according to Guam Homeland Security. By Monday those in the southern Japanese islands will see dramatically changing conditions as Neoguri comes close and closer to Okinawa and the southernmost prefecture of Japan. At this time JMA expects the storm to pass just east of Okinawa putting the island in the left flank of the eye wall on Tuesday.

Exactly how strong winds will be will be determined through the weekend depending on the exact track of the storm and how its intensification progresses. At this time those in southern Japan should prepare for typhoon strength winds and heavy rainfall through the first half of next week.

Meanwhile the monsoon will continue to pump moisture over the Philippines as Neoguri tracks to the east. For those here be ready for the threat of flash flooding especially in Urban areas with poor drainage through the weekend.

Posted by Rajan Alexander at 9:01 AM