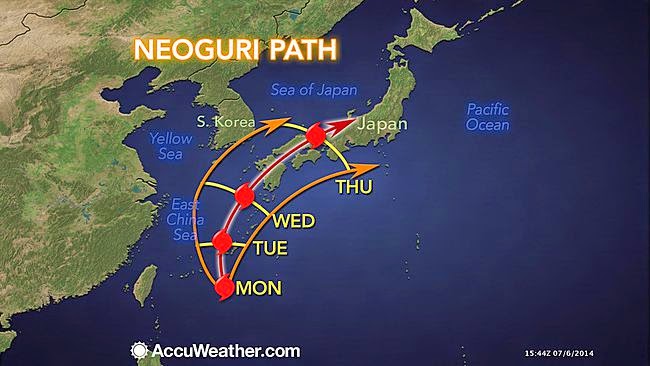 (Accuweather) Typhoon Neoguri is on track to become the first super typhoon of 2014 and threaten lives and property in Japan.

Further strengthening will occur through Monday as the typhoon progresses through an area of very warm water and low wind shear (strong winds above the surface that can shred tropical systems apart). Neoguri is on pace to become the year's first super typhoon in the western Pacific Basin with maximum sustained winds of at least 240 kph (150 mph) and life-threatening consequences.

Residents and visitors in the path of this intensifying and dangerous typhoon should use the time now to make the necessary preparations and heed all evacuation orders.

AccuWeather.com meteorologists expect Neoguri to be a super typhoon when it crosses the gap between the Ryukyu Islands of Miyako Jima and Okinawa on Monday night (local time).

"Being right of the storm track, Okinawa will likely see the worst impact from the storm Monday night with rainfall rates of 50 mm (2 inches) or greater per hour at times, sustained winds as high as 225 kph (140 mph) with occasional gusts of 290 kph (180 mph),"

stated AccuWeather.com Meteorologist Evan Duffey. Westernmost parts of Okinawa, home to the United States' Kadena Air Force Base, will be at greatest risk for the strongest and most devastating winds.

"Quite a large storm surge is possible over the southern Ryukyu Islands with some locations near the center of the storm seeing a threat for storm surge in excess of six meters (20 feet),"

stated AccuWeather.com Meteorologist Eric Leister. The life-threatening and devastating impacts will gradually taper off across Okinawa on Tuesday, while conditions worsen across the Ryukyu Islands to the north. 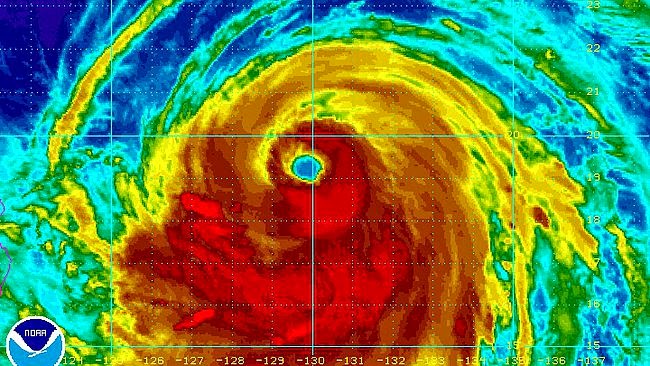 After leaving Okinawa, Neoguri will begin to turn to the northeast toward mainland Japan with landfall on Kyushu Island anticipated for Wednesday night.

While no longer a super typhoon, Neoguri is still expected to be a powerful typhoon when it reaches Kyushu. Land interaction will then cause Neoguri to rapidly weaken as it crosses Japan, but that does not mean that residents should let their guard down.

"Tuesday night, rain and wind from the storm will begin reaching Kyushu Island, especially the southern side. The strongest impacts, however, will hold off until Wednesday and Wednesday night for southern Japan," Duffey added.

"Strong winds, flooding rainfall and inundating storm surge will continue to bring very dangerous conditions to the islands of Kyushu and Shikoku, including the cities of Kagoshima and Nagasaki."

The worst of the storm surge will target western and southern parts of Kyushu, but all coastal communities along the southern and eastern coast of mainland Japan will experience an increase in water levels and extremely rough surf.

Despite the typhoon weakening, heavy rain will bring concerns for major flooding across parts of Honshu. Mountainous locations will be most susceptible to the highest rain totals.

Flooding may also develop across the island of Hokkaido, even if the center of Neoguri stays well to the south. The interaction of moisture from Neoguri and a cold front will lead to torrential rain Thursday night through Friday.

"By the time all is said and done, localized rainfall amounts in excess of 380 mm (15 inches) will slam parts of Japan with the most likely locations being the Ryukyu Islands, Kyushu, Shikoku, eastern Honshu and Hokkaido," continued Duffey.

"Wind damage will be widespread, especially over the Ryukyu Islands and Kyushu. Port cities and low-lying areas will be inundated by storm surge."

Tokyo is expected to escape the worst of Neoguri but will still be soaked by some rain later in the week. Coastal suburbs should brace for rough surf and coastal flooding.

South Korea should also narrowly miss the brunt of Neoguri. However, the outermost rain bands of the typhoon should still graze and drench the southern coast at midweek with pounding surf also developing.

"The island of Jeju in the Korea Strait will likely see the worst impacts for South Korea. With the storm just off to the south, the island will certainly see strong winds, along with very rough surf and heavy rain," added Duffey.

Posted by Rajan Alexander at 12:23 AM