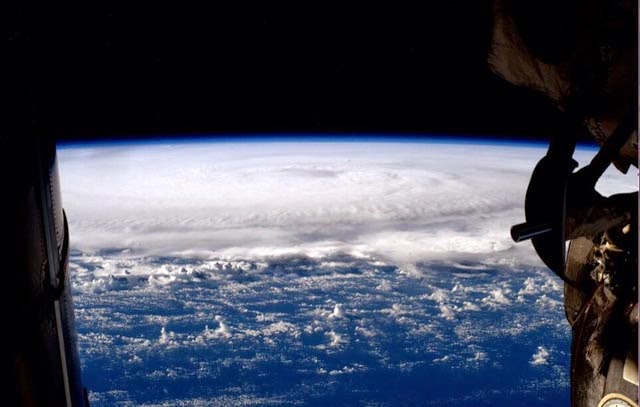 Typhoon Neuguri brewing in the Pacific as seen from space station


Typhoon Neoguri has very rapidly strengthened to Category 4 (Very Severe Cyclone) and expected to hit Category 5 (super Cyclone) strength by tomorrow or latest by Tuesday as it moves through the waters of North-Western Pacific Ocean.  This transition to Category 5 is aided by the fact that it is already a very well defined storm and further tracks very warm ocean waters having low wind shear.


This blog has been tracking Neoguri from the time it emerged as a low and have been warning that it can derail monsoon revival. Vinson Kurian of the HinduBusinessLine's latest article tells us how Neoguri is successfully throwing a spanner in the IMD's forecast of monsoon revival next week. July second week is usually considered the the last window of opportunity  after which sowing activities in the country gets hit very badly.

As of now, until Neoguri makes landfall sometime in Wednesday-Thursday next week, rainfall deficiency is expected to climb threateningly to breech the 60% levels. There is now no point in neither IMD nor the Modi Sarkar trying delude the people of the country that the monsoon failure is manageable task. 2014 is poised to register as one of the worst, if not the worst monsoon failure in our recorded history and the sooner our Prime Minister, Narendra Modi declares a national disaster emergency, the better it can be managed. Our Finance Minister Arun Jaitley, can do well by announcing a drought relief centric budget on 10th July, Thursday. (VinsonKurian, HinduBusinessLine) The southwest monsoon has got stuck yet again soon after extricating itself out of a 15-day-long hold-up over West and Central India.


The system has failed to advance after a low-pressure area forming in the Northwest Bay of Bengal helped it break the jinx three days ago, bringing it with hopes of rain into the parched West and Northwest India.

But these hopes have been belied with the latest logjam attributed to the presence of a raging typhoon Neoguri in Northwest Pacific.


Being the most prominent weather feature in the larger Asian monsoon system, Neoguri is pulling away monsoon flows along the India’s West Coast, southern peninsula and adjoining South Bay into the Pacific.

In fact, Neoguri is fast ramping up into a class-topping Category-5 storm on the Saffir-Simpson scale for storm intensity featuring very strong winds speeding to beyond 250 km/hr.

The storm has already reached Category-4 strength (very severe cyclone) will ratchet up to Category-5 (super cyclone) strength tomorrow. Neoguri will skirt the Southeast China coast and head straight towards South of Fukuoka in southern Japan, according to typhoon trackers.

It will keep the Category-5 status unchanged for another day before weakening to Category-4 and hitting South Japan on Wednesday. It would rapidly weaken later to Category-1 strength and to a tropical storm.

The Indian monsoon is likely to remain a mute witness to the ferocity of the dangerous North Pacific typhoon until it makes a landfall over South Japan on Wednesday.

Back home, India Met Department said this morning that the monsoon-driving ‘low’ over East Uttar Pradesh is already weakening and will become ‘less marked’ during the next 24 hours. This is because both moisture feed and by extension supportive wind speeds along the trough that links the Bay with Punjab is weakening in view of the ‘pull power’ of typhoon Neoguri.


Satellite pictures showed that thunderclouds were drifting along the West Coast and a wide corridor across interior peninsula and Central India into West Uttar Pradesh.