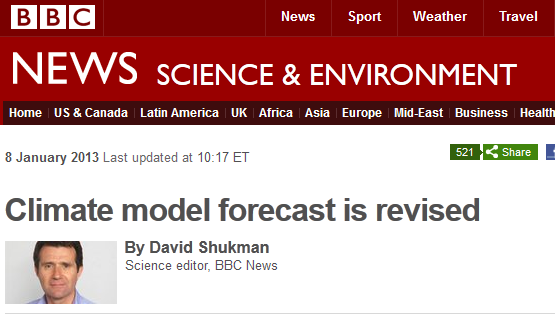 The UK Met Office has revised one of its forecasts for how much the world may warm in the next few years. It says that the average temperature is likely to rise by 0.43 C by 2017 – as opposed to an earlier forecast that suggested a warming of 0.54C.


The explanation is that a new kind of computer model using different parameters has been used. The Met Office stresses that the work is experimental and that it still stands by its longer-term projections. These forecast significant warming over the course of this century.


The forecasts are all based on a comparison with the average global temperature over the period 1971-2000. The earlier model had projected that the period 2012-16 would be 0.54C above that long-term average – within a range of uncertainty from 0.36-0.72C.

This would be only slightly higher that the record year of 1998 – in which the Pacific Ocean’s El Nino effect was thought to have added more warming.  If the forecast is accurate, the result would be that the global average temperature would have remained relatively static for about two decades.

“Our forecast is still for temperatures that will be close to the record levels of the past few years. And because the natural variability is based on cycles, those factors are bound to change the other way at some point.”

It describes the decadal projections as part of an experimental effort launched in 2004 to fill the gap between daily weather forecasts and century-long estimates for climate change.


But this is an emerging and highly complex area of science because of the interplay of natural factors and manmade greenhouse gases at a time when a key set of temperatures – in the deep ocean – is still relatively unknown.


One aim of attempting to project the climate on this timescale is to be able to rapidly check the accuracy of the models being used.


A paper published last month in the journal Climate Dynamics, authored by scientists from the Met Office and 12 other international research centres, combined different models to produce a forecast for the next decade.

Posted by Rajan Alexander at 9:13 AM