UK heading for another “Beast from the East” Next Week. Super Cold...Brrr...... 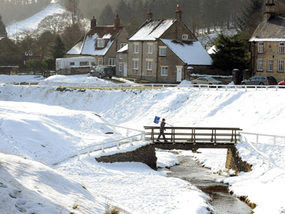 Climate Realist) Latest 6-30 day Met Office forecast looks to indicate ANOTHER "Beast from the East" is heading towards the UK NEXT WEEK....this is the forecast for LONDON issued today at 16:00...having seen the Weather Action forecast from Piers Corbyn for the same period it looks very similar...maybe they have a copy:)...or did they have a look at the recent forecast from Joe Bastardi: Victorias Secret? It was darn cold when she ruled & its going to get darn cold now.

Cloudy with outbreaks of rain in many areas on Saturday. The best of any drier weather towards the northwest. Drier and brighter for many central and western areas on Sunday, but showers in the east will turn increasingly wintry, with snow possible over hills. Temperatures near or a little below normal, with frost becoming more widespread, and some fog or freezing fog patches, which could be slow to clear during the day. Through next week, most likely to remain cold with further wintry showers, especially in northern, central and eastern parts, but also a good deal of dry and sunny weather, with overnight frost and fog. However, there could be some rain, and milder interludes towards the west. Thereafter very uncertain, but most likely to remain colder than average.

There is greater than average uncertainty through this period, with no strong signal for any one weather type to dominate. However, on balance colder, drier conditions are more favoured rather than the milder, wetter weather experienced so far this winter.

Posted by Rajan Alexander at 12:22 PM