(Joe Bastardi in http://notrickszone.com) First in North America, weather models at about the 2:45 mark show that things could get awfully brutal for an extended period. Already the 7 – 14 day forecast looks ugly: 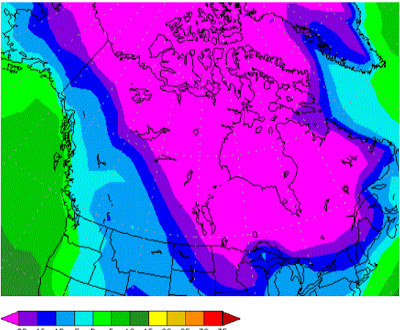 Joe calls it “a heck of a weather period coming up”.


Here in Europe we’ve had a nice spell of mild weather since Christmas-time, and some of you may be thinking of getting started already on some springtime chores. Well, don’t put the snow shovels and antifreeze away just yet. Models have been converging on and are pointing to another “Beast from the East” getting poised to shock-freeze the continent.


It’s too early to say just how brutal it may get. But should a protracted, deep cold develop, then it’ll be interesting to see how Germany’s now vulnerable electricity grid will hold up. A number of institute’s have been warming that if the winter turns hard, Germany’s power grid could collapse – thanks to the huge gap in baseload capacity left by the German government’s hasty shutdown of 8 nuclear reactors in the wake of Fukushima in 2011.

Of course 30-day general forecasts are nothing certain, and things could develop differently. But should anything like this indeed develop, then look at the cold headed for Germany, Eastern and Central Europe. I really do hope they have every source of electricity generation ready on standby because they are going to need it.


Germany’s leaders, in my view, have been playing an irresponsible game of Russian Roulette with its citizens when it comes the nation’s power grid and supply, winging it and praying they’ll somehow eek by another winter. This winter they may not be so lucky. I can see the headlines already.


Enjoy the last few remaining days of mild weather. After that, hope that the Beast from the East shows a little compassion. Unfortunately, Mother Nature rarely does so.