How the Cold Wave Can Bring Down Food Prices 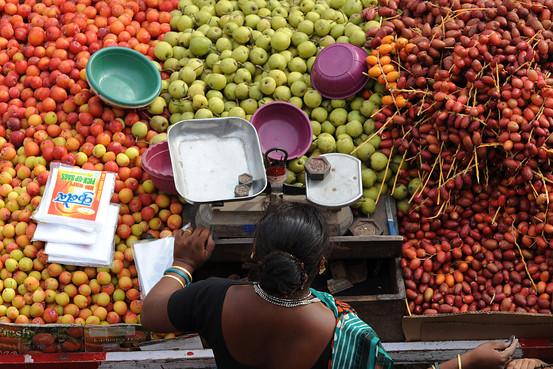 (Wall Street Journal) There’s a silver lining to the bitter cold that has enveloped northern India: it could help bring food prices down.

The dip in temperature may bring cheer to the economy as experts predict a bumper harvest of winter-sown farm products that benefit from the cold.

"India’s meteorological department predicts cold wave conditions to continue in many parts of India over the next week due to strong winds from the northwest region, which may help the crops before harvesting. In and around the Indian capital, temperatures touched a four-decade low last week,"

according to an official from the meteorological department.”

S.C. Bhan, a director with the state-run India Meteorological Department said temperatures may rise slightly in northern states such as Punjab, Haryana and Delhi in the next three to four days, but cold wave conditions in Uttar Pradesh would continue a bit longer. The eastern state of Bihar is also likely to remain under the cold snap for some more time.

Last summer, the prices of fruits, vegetables and other farm products rose after a drought gripped some India states in the summer months. Food prices have now started easing as winter fruits and vegetables are starting to arrive on market stalls. During winter months 50% of the overall agricultural produce is harvested.

Prices of winter vegetables such as potato, cabbage and eggplant have already fallen 15%-20% in the past one month.

Fruits and vegetable prices contribute 4% to the wholesale price inflation, which is a substantial share to influence the overall inflation, said Sujan Hajra, chief economist at Anand Rathi Securities. Even after the recent fall in prices, food inflation has continued to hover near double-digit rates at 8.5%.

Analysts say inflation could come down to at least 8% in the next two months, once the harvesting of winter crops reaches a peak by early March.

“A late pick up in monsoon has improved moisture content as well as reservoir water level and the acreage data is also encouraging. So we will see a further fall in food inflation once the harvest picks up,”

said Chowda Reddy, senior analyst with Hyderabad-based brokerage JRG Wealth Management. The stubborn food inflation has hit the households most at a time when the economy is also in a bad shape and the incomes are not rising in proportion with the inflation rate.

“We have stopped watching movies these days in multiplexes as our whole household budget has gone topsy-turvy. The price of vegetable is now deciding what we cook for dinner,” said Sukanti Das, a 28-year-old housewife from New Delhi.

“I can live without the sun. If it means lower food prices, bring it on,” she said.

In a first of its kind, some state governments like Delhi and Goa have started giving financial assistance to poor families to fight inflation.

High food prices have been troubling policymakers on another front: How to bring down lending rates to stimulate industrial growth without pushing up overall inflation? Lower food prices may just give more impetus to the central bank to start cutting lending rates.

And if that does happen in the central bank’s policy review on Jan. 29, the shivering populace can thank the cold wave.

Posted by Rajan Alexander at 11:58 AM