The Independent: Why the big chill is such a culture shock for Britons 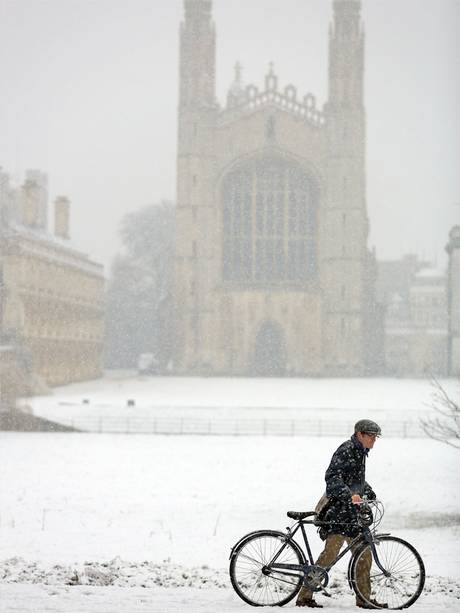 How badly are you feeling the chill? Have goose pimples lent your skin the texture of a cheese-grater? Have your eyeballs frozen over and your nipples retreated inwards? Are you wearing so many layers of clothing that the only thing that separates you from the crazy bird lady in Mary Poppins is, well, the birds?If so, you might have found comfort of sorts in Radio 3's A Brief History of Being Cold. While it's worth pausing over the sleight of scheduling that prompted Alexandra Harris's examination of "the culture of cold" to pop up on the one day of the year that the country has ground to a snowy halt, there was considerably more to this programme than good timing.


The British don't do cold well, of course. If the last week has taught us anything it's that a few inches of snow in an urban environment equals the apocalypse; that a supermarket "bag for life" makes a surprisingly effective sledge; that ballet pumps are not adequate footwear during a cold snap.

We have learned that we are spectacularly ill-equipped to cope with the winter weather what with our draughty houses, our frozen pipes, our knackered transport systems and dodgy Peruvian hats imported all the way from Topshop. We have learned that snowfall must be greeted first with child-like glee and later, as it turns grey and damp and perilous, with constant and ferocious carping that won't let up until March, at which point we can start moaning about floods instead.


Harris, however, was more interested in the effect of the cold on language, literature and the course of human history, even if she was rightly scornful about Britain's

"middle-ranking sort of cold that hovers around zero".

During a week when we have been overwhelmed by yellow snow warnings (oh, how we laughed), school closures, railway meltdowns and pictures of children standing proudly aside sinister snowmen, Harris's version of the cold seemed gloriously poetic. She spoke of haunting landscapes, of mid-January as

"the still-point before life starts up again" and of Keats's description of our condensing breath appearing "ghostly... like a soul rising without a death".

On one hand, Harris was content to peddle the romantic view of winter as depicted on the front of Christmas cards and, from beneath my woolly layers, I was content to listen. She talked to the poet Simon Armitage who recalled the childhood moments when he pulled back the curtain to find an unexpected blanket of snow.

"I've always associated snow with a clean slate, a kind of innocence," he said. "I think coldness and everything that's allied with it takes you back to being young."

But the presenter was also keen to show the dark underbelly of the cold season where, in centuries gone by, humankind was engaged in a battle with the elements and, in the absence of Thinsulate fabric and combi-boilers, many perished. It was noted that comparatively few of us have experienced real, deathly cold –

"there are generations now who never get a chilblain," remarked the novelist A S Byatt in disgust – while Harris remarked that "we are the most heated generation in history."

The essential message in all this was that we're now a bunch of sissies who, rather than manfully grappling with extreme weather, would rather throw on a onesie and crank up the central heating.


It was with audible discomfort that Armitage was deposited on a snowy Marsden Moor in Yorkshire to read a poem. Asked if poetry could help a person overcome the cold, he admitted, through chattering teeth,

"If you end up on a glacier somewhere with a poem in your pocket, ultimately it's probably not going to pull you through."

Posted by Rajan Alexander at 10:32 AM