A few years ago, NGOs like Greenpeace; Centre for Science & Environment and Oxfam almost succeeded in creating mass hysteria around issue of the Himalayan Glacier melt due to global warming effects. They rechristened the Himalayas as the Earth’s Third Pole. They warned the consequence of its rapid melt would be that soon much of India would experience a huge water crisis, widespread agriculture failure, uncontrollable political unrest and mass migration - just to mention a few elements in their long list of fallout.

The truth: For the last decade, there had been no net melt. In the last 3 years, the glaciers are rebounding spectacularly and expanding. Here is yet another article pointing to this trend. 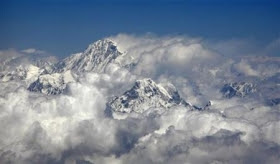 (Times of India): With high-altitude mountains in Himachal Pradesh experiencing up to 100 cm fresh snowfall in November month after 10 years, the abundance of snow on mountains has rejuvenated nearly one thousand glaciers and has ensured uninterrupted supply of water for drinking, irrigation and hydel projects.

According to Kuniyal, changing pattern of weather, which is causing extreme weather conditions and shifting of the seasons, is a matter of concern.

"Snowfall is good but heavy snowfall in lower and new areas and scanty snowfall on higher areas is sign of global warming. For now, regular spells of snowfall are good for vegetation and hydel projects as there would be enough moisture and water in summer months."

Posted by Rajan Alexander at 6:13 PM