Sceptics weather the storm to put their case on climate 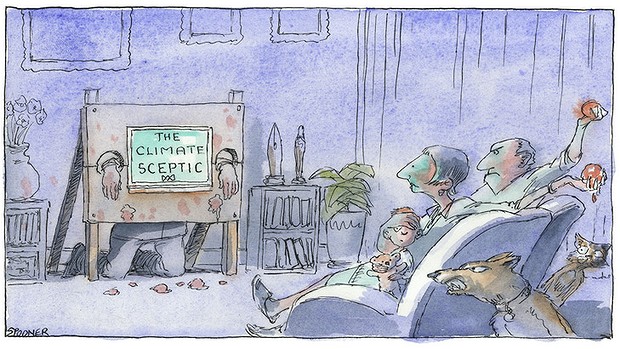 (John Spooner in TheAge) Well, so much for the 2012 apocalypse. If the ancient Mayans ever knew anything about the future, they made a serious miscalculation. The same fate has befallen the international climate change emergency brigade. About $1 billion and 18 "Kyoto" meetings later, the world has agreed to do nothing much more than meet again.

How did this frightening climate threat dissolve into scientific uncertainty and political confusion? What of the many billions of dollars of wasted public resources? Some might blame the "sceptics", the "merchants of doubt" or the "deniers". Others point to the global financial crisis.

We can say for certain that many hesitant individuals overcame the pressures of group-think, intimidation and tribal disapproval to have a closer look at the relationship between real science, politics and business.

I was once told by a friend that when it comes to scientific issues of major public concern, it is

"not what you know but who you know".

I think he meant that my fledgling scepticism about dangerous anthropogenic global warming (DAGW) was pointless, for as a cartoonist I was as unqualified to assess the science as he was.

The implication was that all who are untrained in "climate science" are required to accept the scientific and political authority of the Intergovernmental Panel on Climate Change (IPCC) and its local colleagues such as the CSIRO: the scientific establishment.

I found my friend's advice baffling. Anyone familiar with the judicial process knows the gravest issues of liberty and fortune are often determined by a jury selected from the public. Expert witnesses can give evidence in support of either side at a trial. The judge must rule on questions of admissibility, but in the end it is the jury that decides which scientific evidence is to be believed.

In the climate debate, the only "judge" is the scientific method - a testable hypothesis followed by factual or experimental challenge. The "facts" here represent an anxious problem for the DAGW advocates. For example, everybody agrees that the warming trend paused 16 years ago, despite a corresponding 10 per cent increase in atmospheric CO2. This ought to be an embarrassment to the global warming alarmists. What exactly is the relationship between CO2 and temperature? Why did the warming trend stop as it did between 1945 and 1975, when CO2 emissions took off?

As Dr David Whitehouse, the former BBC online science editor, said in the New Statesman in 2007

"something else is happening to the climate and it is vital we find out what or we may spend hundreds of billions of pounds needlessly".

Obviously we should pay close attention to the computer models that form the basis of climate scientists' projections. In fact these models apparently failed to anticipate the current pause in global warming, not to mention the abundance of post-drought rainfall in Australia. Scientific "consensus" based on these computer models is becoming rather shaky.

The reason why scientific consensus emerged in this debate is because political activists want to get things moving, and if they say that consensus is scary and urgent, then sceptics had better get out of the way.

The activist cause peaked early in 2007 when Al Gore's film An Inconvenient Truth became an international hit. This documentary was superficially compelling for the uninitiated, but in October 2007 the British High Court found the film contained nine errors of fact.

Professor Bob Carter of Queensland's James Cook University gave evidence in this case; few people in Australia are aware of this severe embarrassment for Mr Gore.

Later that year, the ABC broadcast Martin Durkin's provocative documentary, The Great Global Warming Swindle, against the outraged objections of many prominent alarmists. How interesting. The science was "settled", the debate was said to be over and no further discussion was required. Any media professional should have been aroused by such an excited censorship campaign, and it stimulated my first cartoon on the subject (above), which depicted the family TV set as medieval stocks with an imprisoned climate sceptic being pelted by the family with their TV dinner.

It seemed to me that things changed after that documentary was screened. Perhaps the shock of hearing the likes of Nigel Calder, former editor of New Scientist, and Patrick Moore, co-founder of Greenpeace, had joined the ranks of the sceptical was just too much for some people.

Things got nasty. Someone came up with the brilliant but insidious idea of using the term "denier" to describe a person who remained agnostic or sceptical about the exact human contribution to the 0.7 degree global warming of the past 100 years. This malicious rhetoric came to be adopted by climate activists, media reporters and politicians up to head-of-state level. Many distinguished scientists such as Paul Reiter of the Pasteur Institute in Paris, Professor Richard Lindzen of MIT, and Bill Kininmonth, former head of our National Climate Centre, were casually defamed in this way. The same label was applied to world-renowned theoretical physicist Freeman Dyson and Australia's distinguished Professor Bob Carter.

Holocaust denial describes the heartless and despicable refusal by anti-Semites to acknowledge the historical truth of the Jewish genocide of World War II. If you use the offensive term "denier" you do so for reasons best known to yourself. You may be calculating or you may be indifferent, but as Wong, Rudd and Gillard would have known, the effect is pungent. No sensible, morally responsible person wants to be stigmatised in such a way.

Some prominent Australian intellectuals to this day continue to explicitly endorse the moral equivalence between Holocaust and global warming denial. This is all the more incredible because it comes from academics who understand the horror of the Holocaust. For good measure, sceptics have also been compared with 18th century slave trade advocates, tobacco lobbyists and even paedophile promoters.

But times have changed, and since 2007, the non-scientific players in this great intellectual drama have been confronted by creeping uncertainty about many of the major climate science issues. These have included the composition of the IPCC and the credibility of its processes; remember Glaciergate?

The IPCC predicted the end of the Himalayan glaciers based on non-scientific literature; the unusual (or not) melting of sea ice and glaciers; the evidence for warm temperatures during the medieval period; the importance of sun spots; changes (or not) in patterns of extreme weather events; ocean "acidification"; ocean warming and rising sea levels; bio-mass absorption and the longevity of molecules of atmospheric CO2; the influence of short-period El Nino southern oscillation (ENSO) and other similar oscillations on a multi-decadal scale; the chaotic behaviour of clouds; and the impact of cosmic rays on climate. Even James Lovelock, the founder of the "Gaia", movement has turned sceptic.

By early 2010, it seemed that nearly every single element of the global warming debate was up for grabs, and scandals like Climategate and gross mistakes in their work had weakened the credibility of the IPCC. Even Professor Paul Jones of the Climate Research Unit at the University of East Anglia, a leading contributor to IPCC calculations, confirmed in a 2010 BBC interview that the warming rates of the periods 1860-80, 1910-40 and 1975-98 were statistically similar. He also said that

To the great credit of The Age and its pluralistic tradition, the occasional sceptical science article has been published along with regular cartoons on the issue.

However, I still feel that the voices of highly qualified sceptics are not heard enough. In an effort to redress this imbalance, an unusual book on the sceptics' view will be published in 2013.

The text, sprinkled with cartoons and illustrations, takes the Socratic form, giving answers to commonly asked questions about the science and economics of climate change. The content is provided by a collaboration of five highly qualified experts. They include a meteorologist, the former director of the Australian National Climate Centre; a geologist, a former member of the Australian Research Council and chairman of the Earth Sciences Panel; an independent energy consultant who manages his own small hydro power station; a professor of environmental engineering (hydrology) and one of Australia's leading tax consultants.

I trust the integrity and compassion of these "deniers", and admire their courage and awesome perseverance. We hope the book will help redress the imbalance in easily accessible knowledge for a "jury" of ordinary Australians.