This Delhi chill harshest and longest in 40 years

NEW DELHI: When was the last time winter in Delhi was as harsh and as long as this? This bone-rattling spell that began on New Year's Eve hasn't had a parallel since 1973 — the year since when continuous daily temperature records could be accessed and analysed.


For nine straight days since December 31, the capital hasn't seen temperatures rise above 16 degrees Celsius and the minimum has remained below 6 degrees. Taking these two temperature limits as cutoff, TOI sifted through data for the past 40 years. No other unbroken spell of biting chill — both minimum and maximum temperatures staying this low — had sustained for as long as this, it was found.

The closest Delhi came to such a prolonged period of severe cold was a six-day spell that began on January 4, 2011. While there have been longer periods of either the maximum temperature staying below 16 degrees or the minimum not rising beyond 6 degrees, the double whammy of cold days and freezing nights — as seen in the past nine days — was unmatched in the period studied. 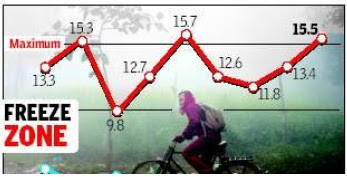 (Times of India) The data, recorded at Delhi's Safdarjung station, was obtained from the US government's National Climatic Data Center, which collates data from stations across the world. TOI took into account temperatures in December and January, the coldest months of the year.

"The main reason for such a long period of extreme cold was continuous incursion of cold air from north," said IMD director-general L S Rathore. "It is unusual for both the maxima and minima to be this low for so long."

Rathore said presence of fog during most of these days contributed to day temperatures remaining low due to the dimming effect of sunlight reaching the ground. Both day and night temperatures are likely to rise in the coming days as a western disturbance enters north India from Pakistan.


While it is common for the minimum temperature to stay below 6 degrees during December-January, 'cold day' conditions — that is, day temperatures staying much below normal — are uncommon.According to temperature records since 1973, the longest spell of below-16 degree temperatures was for 10 days in Jan 2003. In this period, there were only four winters (December-January) when the total number of below-16 degree days was 10 or more. By contrast, there were as many as 33 'coldest nights' (minimum below 6 degree C) out of the 62 days in the 1996-97 winter.

Posted by Rajan Alexander at 8:38 AM