(Andrew in http://theweathercentre.blogspot.in) I believe there is now solid evidence that a polar vortex collapse is probable in at least a few stratospheric levels in the next few weeks (for those wanting my definition of a collapse, see the last paragraph or two).


Part I: The First Warming

The first warming is ongoing, and has been ongoing for several days now. This sudden stratospheric warming is located in the mid-stratosphere at the 50 millibar level, as shown in the below animation:

The most intense warming is centered over northern Canada and the Arctic Circle, as shown by the highest maroon colored anomalies in the animation. This warming suggests even more warm air is being forced into the stratosphere, and the polar vortex should sustain damage from this. For those unfamiliar with the polar vortex, it is the low pressure system (vortex) that sits in the North Pole (polar) and holds cold air up. When the vortex is weakened, cold air tends to flow south. This is also known as the negative Arctic Oscillation. 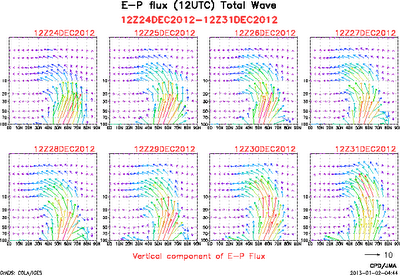 We also use something called the EP Flux to measure what direction the 'wave' of this sudden stratospheric warming (SSW) is moving. Longer arrows with warmer colors tend to signal a stronger wave of this warm air. We can see how the SSW has evolved from the lower stratosphere to the upper stratosphere by December 31, the bottom right image. It is typical for the EP Flux to spike like this when an SSW occurs.


After this first warming, it appears that we will be seeing a second warming in the next 10 days. Let's look at the zonal wind forecast from the ECMWF for Day 7: 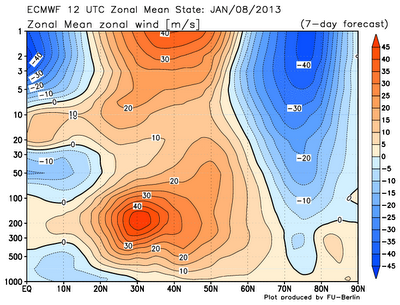 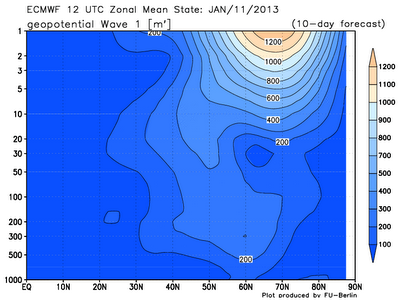 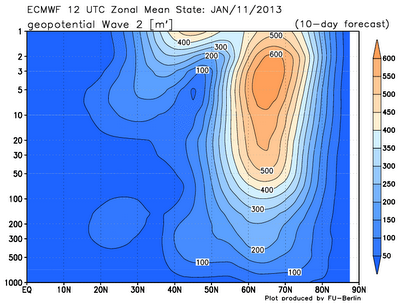 The two images above express 'waves' of geopotential heights. Wave 1 is on the top, and Wave 2 is on the bottom. In areas of warmer colors in either image, higher heights are observed, meaning high pressure has a tendency to form. In a similar situation, darker colors tend to indicate lower heights and thus low pressure areas form. Both images are forecast for Day 10. Let's start with Wave 1. Wave 1 will be going nuts over the SSW as it introduces high pressure anomalies to the upper stratosphere in response to the SSW.

Again, going against the polar vortex (which is a low pressure system). By Day 10, because the First Warming is done, it will begin to die off. However, Wave 2 will begin to strengthen during that Day 10 timeframe, and this strengthening will occur through the upper and middle stratospheric levels, meaning that this second warming would theoretically have more of an impact across the whole stratosphere. In comparison, the Wave 1 had significant high pressure anomalies focused on the upper stratosphere.

This second warming should derail the polar vortex further to the point of a split, which we will discuss more on below.


By the time the second warming begins, the polar vortex has sustained enough damage that it must split into multiple pieces in order to sustain itself. This is shown in these ECMWF forecasts for different stratospheric levels: 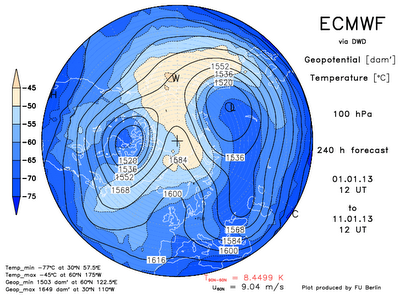 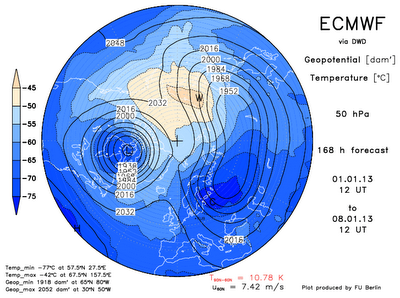 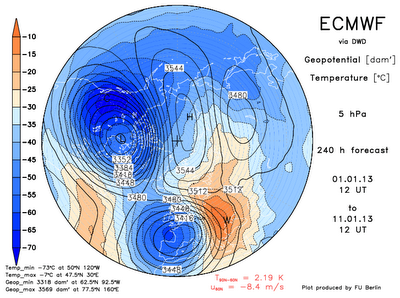 The 100mb level is closest to the troposphere (where we live), the 50mb layer defines the middle of the stratosphere, and the 5 millibar level is as far up the stratosphere I can get without putting up an image that resembles chaos, not a forecast.

I want to start with the 50 millibar layer. Think back to high-school biology for a moment. Recall that when cells divide, they originate from one parent cell and split into two daughter cells in order to make the object stronger (whether it be a cell wall (plant) or a cell membrane (animal)). Well, the polar vortex works similar, but not entirely the same. When the polar vortex is damaged, it will split into two vortices, called daughter vortices, in order to still maintain some control over cold air in the Arctic. When this split happens, it is not to strengthen itself like biology taught us, it is to keep itself alive, rather than experience a collapse in the single parent cell, resulting in chaos across the board. This 50mb layer clearly shows the split in progress by Day 7.

Now let's dart over to the other layers. The 5 millibar layer has a lot of things going on at once. In this case, there are actually three daughter vortices. One is located in Canada, another in western Europe, and the third vortice in Asia. They are all shown as several ovals tightened close to each other with decreasing numbers as you go toward the center of these ovals. The lowest pressure is identified with an 'L', in this case found over Canada. Also happening is a warming event, shown as the warmer colors in this image and happening over Europe and the Northeast US into the Canadian Maritimes. This will further weaken the vortices. High pressure has also built in over the Arctic in the absence of a single parent vortice, with the high pressure defined as an 'H'. The 100 millibar level does not show as severe a split or as severe a warming episode, mostly because the warming has been confined to the middle and upper stratosphere. However, if the geopotential Wave 2 forecast works out, that could change.

A few potential vorticity forecasts also show the split of the polar vortex: 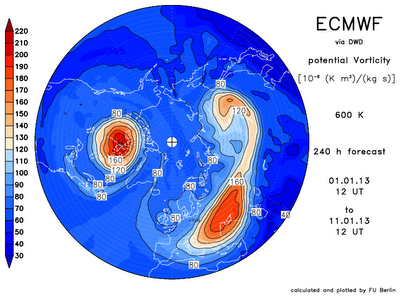 
There is roughly a 1-3 week lag time between a sudden stratospheric warming (SSW) and cold reaching the surface. Based on some research done, I feel that this timeframe should be more in the 2-4 week range this time around, which makes my expected arrival for the cold between January 22- January 27. This cold will persist for several days, especially if this second warming sticks around for a while. The weekly CFSv2 forecasts are showing such a sustained cold outbreak, as shown below in Week 3 (top) and Week 4 (bottom) temperature anomalies. [Anomalies are in Kelvin]

Look at all that blue- that's literally off the chart cold. The forecast is unable to produce any cooler anomalies, because the legend does not go any colder than that. The Week 4 forecast predicts temperature anomalies of 3.5 degrees Kelvin (roughly 6 degrees Fahrenheit) below normal across much of the nation. Significant warming in Canada suggests a continued weakening of the polar vortex may occur, along with blocking that may provoke a negative NAO, but that remains to be seen.

The GFS model is then pinpointing a third stratospheric warming in the long range, shown below: 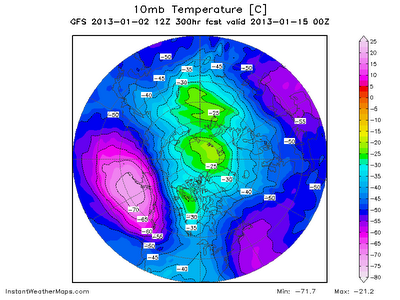 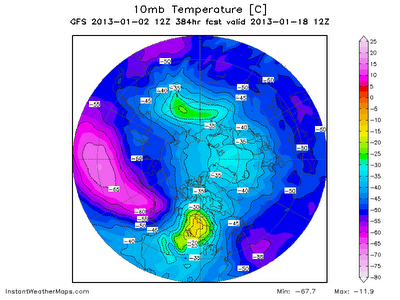 Hour 384 is notorious for never verifying, but this warming forecast has been appearing on several GFS model forecasts, meaning the model appears more certain that this will actually happen, rather than not happen. The warming looks to originate over central Canada, right in the heart of a daughter vortice at that same 10 millibar level. That would only bring further weakening to the polar vortex/vortices and continues to confirm my suspicions of a collapse.

My definition of a collapse is as follows:

"High pressure dominates the Arctic Circle, and any remaining polar vortices are weak and displaced to lower latitudes. A collapse is also believed to have happened if potential vorticity values are anomalously low."

The definition of others' accounts of a collapse is different, but this is just what constitutes my posting of a probable collapse.

Things are looking up for a big cold outbreak in late January, an outbreak that could be sustained in the second and third warmings materialize and stick around for a while.

Posted by Rajan Alexander at 4:47 PM