Saving the planet by condemning people 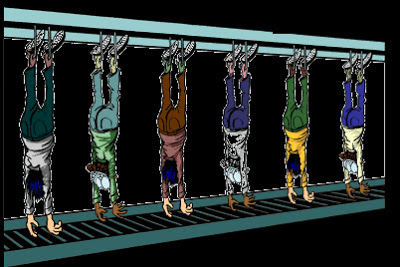 (http://www.spiked-online.com) Can the East have it all? The cars, the houses and the standard of living that the West has?

I say ‘yes’, but a fellow Asian, Chandran Nair, says ‘no’. Nair is the author of Consumptionomics: Asia’s Role in Reshaping Capitalism and Saving the Planet. He is adamant that Asians living in the East should not expect to have the same lifestyles as people living in the West. He is worried that if people in the East keep saying ‘we want it all’, we will only end up destroying the environment, harming natural resources to such an extent that there will be no planet left for future generations.

Nair argues that the supposedly market-driven economics of the West is solely about getting people to produce and consume more. Yes, he admits, economic growth has lifted people out of poverty - but what’s the point of lifting people out of poverty to consume if there is no decent environment to live in? He calls on Asian governments to forget the market, or rather, to use the market selectively, and devise an alternative form of development to the Western model.

For Nair, the environment and natural resources come first, people come second. It is indeed a brave argument to make, given that everyone I know in Asia is striving to better themselves and to create a life where they can have more leisure time and buy the luxuries that many Westerners can afford (many of which are now deemed ‘necessities’ in the West). For example, almost everyone wants to own and drive a car. You only had to watch the news reports on Britain’s Boxing Day sales to know that Asians would like a piece of the action. Contrary to Nair’s argument, Asians do ‘want it all’, and if solid economic growth continues in Asia, they will be able to have it all.

Although Nair also wants people to have good things in life, his preoccupation with natural resources being depleted means he is quite close to arguing that Asians should regress into a more backward style of living. He argues that we should not focus on improving labour productivity and increasing economic growth. We should rather emphasise resource productivity, by which he means replacing large-scale technology and intensive agriculture with labour-intensive farming free from the use of carbon (ie, most machinery) and chemical fertilisers. It reminded me of the British sitcom The Good Life. The central characters, Tom and Barbara Good, decide to escape from the rat race by growing all their own food by converting their garden into a farm with chickens and pigs - much to the dismay of their snobby neighbours.

Yet while that was a comedy, Nair is serious about his proposition for us to forget about the potential benefits from improving labour productivity.

He criticises mechanised tree-felling and also disapproves of cars, even more fuel-efficient ones, given the outcome is likely to be more road building, more driving and more congestion.

As far as he is concerned, Asians cannot enjoy the gains from labour efficiencies, especially when it is also predicted that Eastern populations are generally expected to grow, unlike in the West, where fertility has fallen and populations are shrinking. More people means more consumption, and that, for Nair, spells danger for the environment. So he says we must turn away from what has been as the essence of human progress: the economisation of the time it takes for human beings to provide all the necessities of life. He seems keen to condemn our fellow Asians to a life of endless labour – something most of us have sought to escape from.

Nair’s fear of environmental damage has led him to argue that the ‘environmental cost’ of using land, natural resources and fresh air should be included in the price of products. In both the book and this BBC interview, he gives the example of hamburgers. They currently can cost $4 to $5, but Nair says that if the ‘real’ environmental cost of the grain and water that support the cattle is taken into account, the cost of a hamburger should be closer to $100.

He doesn’t spell out that if the hamburger really did cost that much, only a select few could afford to eat one - but then, from Nair’s perspective, anything that helps reduce consumption levels has to be good. His fear of ecological disaster runs so deep that he bemoans the fact that people in India are changing their eating habits, from being vegetarian to becoming meat eaters.

Nair accepts that many Asians are not going to welcome the style of living he advocates: eating less, wanting less and, for rural dwellers, staying put and tolerating subsistence survival. This is where his authoritarian implications become apparent: he calls on Asian states to intervene to enforce his anti-consumption world. States should set about prioritising the needs of the environment over the needs of the people.

Nair supports the use of blatantly draconian measures.  After all, he reasons, these days it has become acceptable for states to use blunt measures like bans to stop people smoking (ironically spearheaded by those ‘market-driven’ Western states he’s so dismissive of). So why not go further and start banning people from eating too much meat; stop people driving too many cars; stop people moving from rural areas into the cities? He calls on states to impose a carbon tax, a sugar tax, a meat tax, and to stop advertisements that urge people to buy things.

Anything, no matter how intrusive and harsh, seems acceptable to Nair so long as it can change people’s behaviour. He admires the Singaporean state because it has brought in strict rules such as stopping people from chewing gum in public, and he even warms to the Chinese state to the extent that it may be beginning to downplay its focus on economic growth in its push for a ‘harmonious’ society.

Because protecting nature is his first priority, Nair does not see the denial of civil liberties in these countries as problematic. Individual rights for him should be subordinated to ‘collective rights’.

The state should prioritise looking after the collective rights of communities, especially of future generations, and be willing to stop companies or people impacting on the environment. He bemoans the fact that Asian governments are too much in awe of the West, so he calls upon them to start devising Asian models of development and values.

For many of us, Asian states are already far too interventionist. There are many freedoms that Asian governments deny us – freedom of the press, freedom to protest, freedom to move freely from one place to another, freedom to form opposition parties without harassment. The mind boggles that Nair can call upon such governments to be even more authoritarian.

The kind of ‘prosperity’ that Nair recommends, one without economic growth, condemns Asian societies to return to backward stagnation. And in an era of globalisation, where West and East are more closely interlocked in trade and development, such a future equally condemns the West to decline, too. Nair would celebrate such a state of affairs, but for mankind it would be a disaster. Nair might preserve more of his hypothetical natural environment but at the cost of reducing people’s living standards. How that’s a benefit to people beats me.

Para Mullan is a project manager at the Chartered Institute of Personnel and Development.

Posted by Rajan Alexander at 11:44 PM