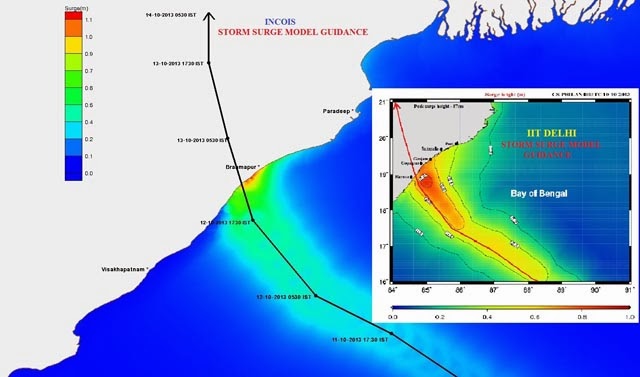 "Do not compare the present system with the super cyclone of 1999. We expect Phailin will make landfall with a wind speed at about 175 kmph to 185 kmph. But in case of a super cyclone, the speed is much more,"

He said the system which has a wind speed of above 220 kmph is considered a super cyclone. But in case of Phailin, the expected wind speed is limited within 185 kmph.

International meteorologists however are not that sure.

The rapid intensification have caught them in surprise. Waters over the Bay of Bengal are exceptionally warm right now—more than 28°C, which is the generally agreed upon threshold above which rapid intensification of tropical cyclones is most likely. From satellite images that wind speed were estimated as clocking 160-170 kmph yesterday itself, giving Phailin an outside chance of being a super cyclone.

The Joint Typhoon Warning Center (JTWC), a Hawaii-based forecasting outpost of the US Navy, says

"Phailin is undergoing “extreme rapid intensification.  The Cyclonic storm will hit land with a maximum sustained wind speed of 205-215 kmph"...