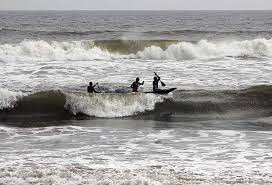 (Stormsurge2010.com) The India Meteorological Department is likely underestimating Tropical Cyclone Phailin's storm surge potential. Phailin is currently on the threshold of a category-4/ category-5 tropical cyclone and is moving towards the coast of Odisha in India. The Joint Typhoon Warning Center predicts that Phailin will slighly intensify and become a category-5 tropical cyclone before making landfall, in approximately 20 hours.

Although the latest statement from the India Meteorological Department (IMD) does not list a current intensity for Phailin, IMD predicts the peak wind speed to reach only around 116 kts (134 MPH), which would make this system a weak category-4 tropical cyclone on the Saffir-Simpson Hurricane Wind Scale. Also, the IMD estimates that Phailin has the potential to generate a 3-meter storm surge near and to the northeast of the landfall location.

Even if the lower intensity forecast is accurate, IMD is likely underestimating the storm surge potential for this dangerous storm. SCIPP has recently conducted a correlation analysis to better understand the relationship between pre-landfall tropical cyclone winds and storm surge heights. Along the U.S. Gulf Coast, this study found that 116-kt (134 MPH) pre-landfall winds, measured at 18 hours before landfall, would generally produce a storm surge of around 3.5 meters (11.5 feet), with higher surge heights produced by storms with larger wind fields, and smaller surges produced by storms with smaller wind fields.

However, the Bay of Bengal tends to have shallower bathymetry (water depth) than the Gulf of Mexico, so generally, we would expect surge heights for comparative storms to be slightly higher in India. Given the pre-landfall intensity, the water depth, and the relatively small (but fluctuating) size of Phailin's 64-kt wind field, we might expect a storm surge height of around 4 m if this lower wind intensity forecast is accurate.

However, the Joint Typhoon Warning Center, and other weather information sources, like the Weather Underground, support the more intense forecast that classifies Phailin as a category-5 tropical cyclone as it approaches the coast. The Joint Typhoon Warning Center predicts a maximum wind speed of between 140 kts (161 MPH), around 24 hours before landfall, with an intensity of 145 kts (167 MPH) at 12 hours before landfall. Such intense pre-landfall wind speeds (> 140 kts or 161 MPH) have only been exceeded three times in our U.S. Gulf Coast storm surge history, and all three of these storms produced at least 6 m storm surges. Here is a list of those storms and the type of storm surge they produced....

Given the shallow water of the Bay of Bengal, we may expect a 6 m (20 ft) storm surge from Phailin, even if the size of the wind field with this storm is relatively small.

All people in the coastal zone near and to the northeast of the landfall location should be evacuated immediately. Although the IMD did call for coastal evacuations, the advice on the latest bulletin that states, "people in affected areas to remain indoors during cyclone landfall," may prove to be catastrophic and life-threatening. IMD is likely underestimating the catastrophic nature of this impending storm surge event, which will likely wash away most structures on low-lying ground in the area of peak storm surge heights.

Posted by Rajan Alexander at 10:11 PM