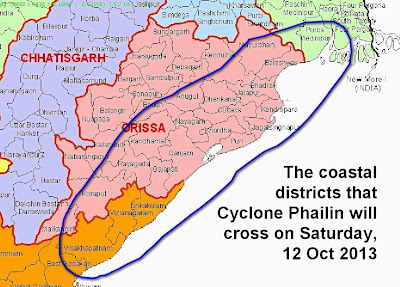 The School of Earth, Ocean and Climate Sciences of Indian Institute of Technology, Bhubaneswar, which has been tracking Phailin since October 7, said there was no chance of the severe cyclonic storm fizzling out.

“Ever since its evolution as low pressure area from Andaman Sea, the direction and movement of Phailin had been steady. It will hit south of Chilika Lake between 5.30 pm and 8.30 pm on Saturday,”

“On Friday, white clouds have started out-flowing from Phailin indicating that coastal Odisha is bracing for the worst. Apart from the destructive wind of cyclonic storm, several parts of coastal Odisha would be inundated as we expect 40 to 50 cm rainfall would occur within very short period,” Prof. Mohanty said.

Prof. Mohanty said the impact of cyclone would be very devastative within a 20-kilometre radius of south of Chilika Lake.

The direction of wind of Phailin would be anti-clock wise and wind would pile up on the right side of eye of storm, which means stormy weather would remain in force for several hours in Paradip.

After landfall, Phailin will persist as a cyclonic storm spreading rains over 3-4 states, with Orissa bearing the brunt.