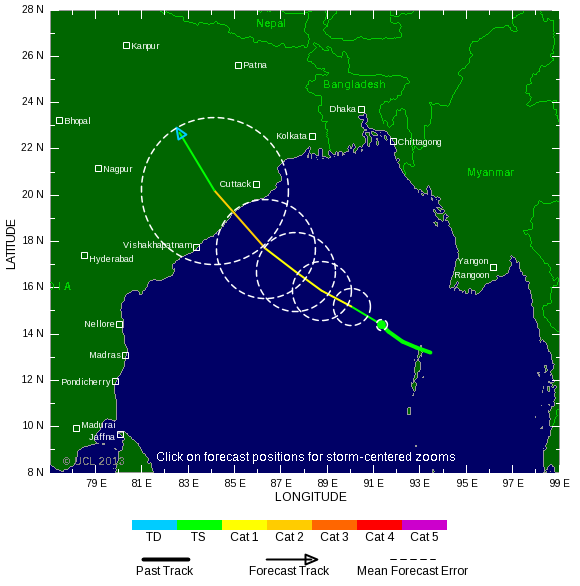 Tropical Cyclone Phailin has formed off the west coast of Thailand, and is moving west-northwest towards India at 8 mph. Satellite images show that Phailin is a medium-sized storm that is increasing in organization and intensity. Water temperatures are warm, 28 - 29°C, and the ocean heat content is very high, 80 - 100 kJ/cm^2--a level often associated with rapid intensification.

With wind shear low, Phailin should be able to intensify into at least a Category 1 storm before landfall occurs near 12 UTC on Saturday, as predicted by the Joint Typhoon Warning Center. The India Meteorological Department (IMD) is predicting that Phailin may be able to intensify into a Category 3 storm before landfall. The 12Z Wednesday run of the HWRF model predicted that Phailin would peak as a Category 3 storm with 125 mph winds at landfall on Saturday. The northeast coast of India where Phailin is expected to hit is vulnerable to high storm surges and is densely populated, so Phailin has the potential to be a very dangerous storm.

The Andhra Pradesh government has issued a high alert in view of the cyclone along cyclonic storm Phailin along coastal Andhra and Odisha. After crossing North Andaman Islands, the deep depression over east central Bay of Bengal on Wednesday night intensified into cyclonic storm Phailin, while remaining practically stationary at about 950 km from Paradip. The cyclone would intensify into a severe cyclonic storm in the next 24 hours with a wind speed of 175-185 kmph and cross north Andhra Pradesh and Odisha coast between Kalingapatnam and Paradip by October 12 night, a bulletin by the IMD said.

Odisha was likely to experience rain and thundershower at many places and heavy rainfall at one or two places in the state in the next 12 hours, it said. Odisha government issued a high alert and cancelled the Dusshera holidays of employees in 14 districts with Chief Minister Naveen Patnaik asking collectors to ensure the safety of the people. The alert was issued to Balasore, Bhadrak, Mayurbhanj, Keonjhar, Dhenkanal, Jajpur, Cuttack, Kendrapara, Jagatsinghpur, Puri, Khurda, Nayagarh, Ganjam and Gajapati districts.

Posted by Rajan Alexander at 9:53 AM