IMD refreshingly shows alot of spunk by sticking their necks out to defend their  forecast that Phailan will fall short of a Super Cyclone.
This is really commendable - stuff which meteorology is made of - sticking your neck out to demonstrate confidence in your forecast while taking on international agencies to rule out their predictions of a super cyclone.

Personally, my blog was one of the first to speculate that Phailan will turn a Super Cyclone and still maintain this forecast. But all the same,  it is very refreshing to see IMD demonstrate alot of spunk. Last year, IMD stuck to their forecast of a normal monsoon, taking on international models who predicted drought. They came out winners in the end. So don't be too fast to dismiss IMD. Who knows they might have the last laugh again??? 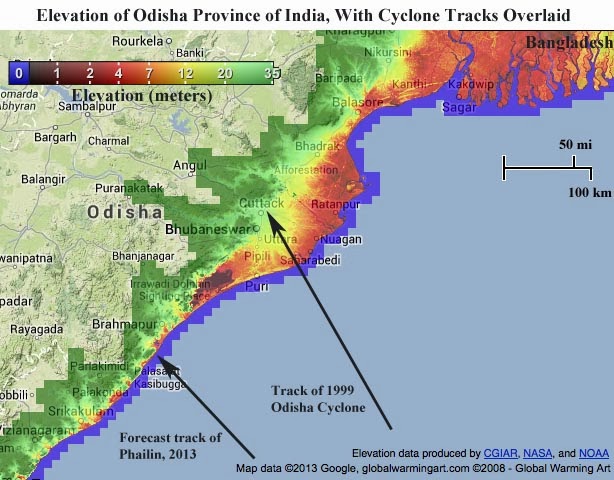 Figure 1. Elevation of the Odisha region of India, with the track of the 1999 Odisha cyclone and forecast track of Phailin overlaid. Phailin is predicted to hit a region of the coast about 100 miles to the southwest of where the 1999 cyclone hit. The coast is not as low-lying to the southwest, which should result in a lower storm surge death toll. The greatest storm surge occurs along the coast to the right of where the center crosses.

Extremely dangerous Tropical Cyclone Phailin is closing in on the northeast coast of India on the Bay of Bengal. Phailin put on a phenomenal burst of rapid intensification on Thursday, going from a tropical storm with 65 mph winds to a top-end Category 4 storm with 155 mph winds in just 24 hours. After reaching peak intensity near 8 pm EDT Thursday, Phailin--whose name means "a sapphire" in Thai--began an eyewall replacement cycle.

The eyewall collapsed, and a new, larger-diameter eyewall formed from an outer spiral band. This process typically weakens the top winds of a tropical cyclone by 5 - 15 mph, and satellite estimates of Phailin's central pressure increased from 910 mb to 934 mb during the eyewall replacement cycle, from 04 - 11 UTC Friday.

However, satellite images show that Phailin has completed its eyewall replacement cycle and is now re-intensifying, with the cloud tops of the very intense thunderstorms in the eyewall expanding and cooling, as updrafts in the eyewall grow stronger and push the clouds higher into the atmosphere.

The latest satellite estimate of Phailin's central pressure had dropped to 920 mb as on 13 UTC (9 am EDT) on Friday. Radar out of Visakhapanam, India shows that heavy rains from the outer bands of Phailin are already affecting the coast, and these bands were bringing rainfall rates of over an inch per hour, as estimated by microwave data from 10:55 UTC Friday. Phailin is over ocean waters that have warmed since Thursday, and are now 29 - 30°C. These warm waters extend to a lesser depth than before, and ocean heat content has dropped to a moderate 20 - 40 kJ/cm^2. Wind shear remains low, 5 - 10 knots.

Phailin's heavy rains will be capable of causing very destructive flooding; the 00Z Friday rainfall forecast from the HWRF model (Figure 3) calls for a significant swath of 8 - 16" of rain along the path of Phailin inland. Rains from the 1999 Odisha cyclone killed more than 2,000 people in the town of Padmapur, located more than 150 miles from the coast. Deforestation was cited as a contributing cause to these destructive floods that killed 36% of the town's population. 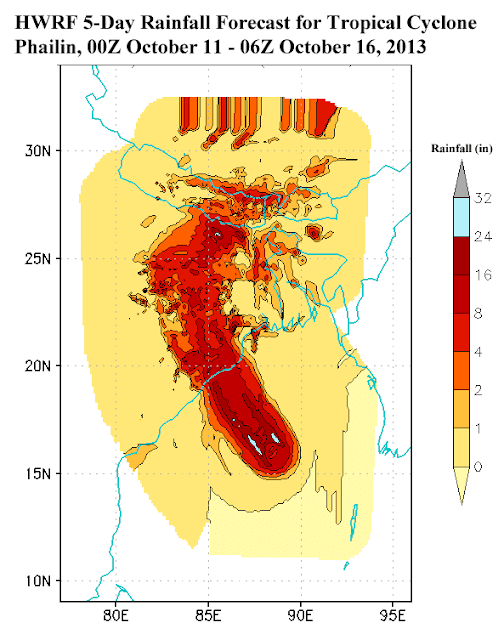 Figure 2. The 00Z Friday rainfall forecast from the HWRF model calls for a significant swath of 8 - 16" of rain along the path of Phailin inland. Image credit: NOAA/NCEP/GFDL.

Posted by Rajan Alexander at 8:01 PM