Cyclone Phailin less than 20 kms off Odisha. To strike land in matter of minutes. Death toll up to seven 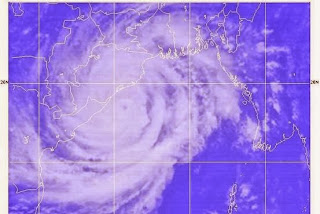 Pahilin is now less than 20 kms away from the cost of Odisha and is expected to make landfall within the next hour near Gopalpur. 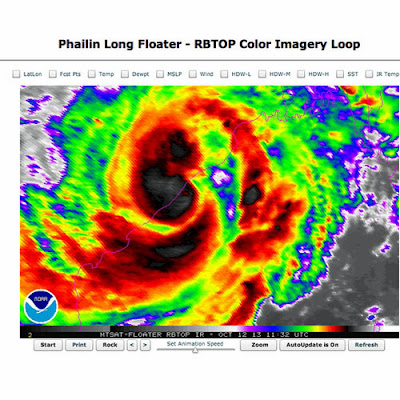 Outer layer of the storm as seen from the latest satellite image has already crossed land but landfall technically is when the eye of the storm makes landfall - which should be in the next 30 minutes.

Though according to IMD satellite data - the eye is still to make landfall which should be shortly. But the thermal map seems to indicate Phailin made landfall at 5.40 pm as Eric Holthaus, lead Meteorologist & Weather Editor for the WeatherMob app to claim

"Cyclone Phailin has made landfall near Srikakulam, Andhra Pradesh."

According to CNN-IBN, waves have reached a height of 3 to 3.5 metres along the coast. Electricity has been cut off in Andhra Pradesh’s Srikakulam district. CNN-IBN is also reporting that seven people have been killed in Odisha cyclone-related incidents so far.

Posted by Rajan Alexander at 7:15 PM