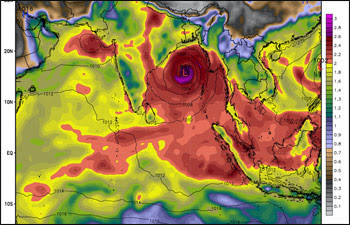 (Stormsurge2010) The Joint Typhoon Warning Center forecasts TC Phailin to approach the coast of India, near southwest Odisha, and make landfall around 0900 UTC on Saturday, October 12th. This would be during the Saturday afternoon in India.

That said, I investigated the Joint Typhoon Warning Center forecast for October 11th at 1500 UTC, which would be approximately 18 hours before landfall. The wind forecast is grim indeed, with maximum sustained winds forecast to exceed 140 knots (161 MPH). In an analysis we've recently conducted on 117 historical surge events along the U.S. Gulf Coast, only four events exceeded 140 knots at 18 hours before landfall. A regression analysis shows that the typical surge height produced by a storm with this wind speed (averaging bathymetry, storm size, etc.) would be around 5-6 meters (17-20 feet).

Some discrepancy exists related to the size of Phailin. According to the Capital Weather Gang's recent blog post, Ryan Maue, of Weatherbell.com, stated, "It's equivalent to Katrina in size." (see: http://www.washingtonpost.com/blogs/capital-weather-gang/wp/2013/10/10/potentially-catastrophic-cyclone-phailin-headed-for-india/.)

However, the Joint Typhoon Warning Center provides a wind swath forecast as follows for the approximate time of 18 hours before landfall:

These dimensions are quite small. By comparison, we recently found that the average size of 64-kt winds was around 61 nm for tropical cyclones since 1988, for which we had accurate storm surge data. Hurricane Katrina was generating 64-kt winds out to 90 nm and Ike was producing 64-kt winds out to 105 nm at 18 hours before landfall. Hurricane Charley was considered a small tropical cyclone, with 64-kt winds only out to 20 nm at landfall, and this storm size may be fairly close to Phailin, if the Joint Typhoon Warning Center forecast is correct. Tropical cyclones with this size generally produced storm surges of approximately 2 meters along the U.S. Gulf Coast.

The Bay of Bengal tends to be very shallow, which helps to increase surge heights and make them generally even higher than along the U.S. Gulf Coast. This shallow bathymetry may essentially cancel out the small storm size and generally produce a storm surge that is similar to the typical height along the Gulf Coast for a storm of this intensity (5-6 meters or 17-20 feet). However, if this storm does turn out to be geographically large and hold it's intensity, we could see an even more catastrophic storm surge that exceeds 8 meters (around 26 feet).

We can only hope that people in this storm's path will take precautions and seek safe shelter or evacuate the region of peak storm surge. We will hope and pray that everyone will hear and heed the warnings for this catastrophic surge event.

Posted by Rajan Alexander at 10:29 AM