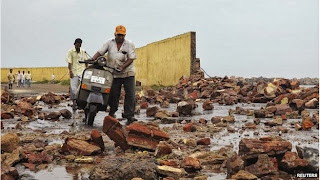 The worst of Cyclone Phailin is over, but signs of its passage can be seen thanks to a trail of devastation

The wind speed of the Cyclone Phailin has reduced giving some hopes of less damage and destruction. Even though it is too early to come to any conclusion, there has not been any report of massive destruction and death from the Cyclone affected areas.

The winds of over 200 kmph had also uprooted trees, telephone and electricity poles, and torn off roofs in the area. The storm is weakening, and focus is now shifting to rescue operations. In Gopalpur, Odisha where Phailin made landfall, low lying areas are completely inundated thanks to storm surges that caused flooding as much as half a kilometre away from the coast.

Electricity has been cut off in Ganjam, Gajapati, Khurda, Nayagarh, Puri, Cuttack, Kendrapara, Jagatsingh, Jajpur, Bhadrak, Balasore and Mayurbhanj. Morning after Cyclone Phailin dawns. Some damage to buildings and uprooted trees and electricity poles, but no loss of life reported so far other than those before cyclone hit land yesterday. (7:30am)