Indian Express: How Met, NDMA got it right, Orissa put 1999 behind 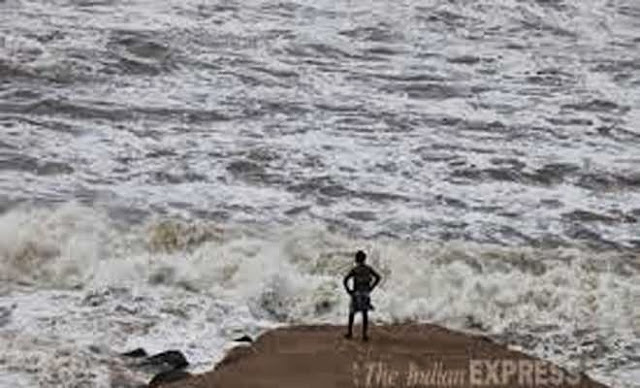 "Hundreds feared killed as winds with a velocity of over 260 km per hour batter 10 coastal districts of Orissa for over eight hours. A panicked state government, ill prepared, calls in for help. The scale of devastation not known even a day after the disaster as communication to thousands of villages cut off. The blame for not preparing for the calamity falls equally on the Weather Department"."

That was the news that hit the front page of this newspaper on October 30, 1999, the day after the super cyclone hit Orissa.

Cut 14 years ahead and the story of Phailin is totally different: 9,800 died then, 18 deaths have been reported so far this time; a few thousand evacuated then, more than 9 lakh taken to rescue shelters in 2013; communications completely destroyed then, Orissa is already talking about restoration now.

While the severity of Cyclone Phailin was by most indications lesser than the 1999 storm, one of the potentially worst natural disasters to hit India in years was averted due to a combination of efforts — including by the Meteorological Department, the state government and Centre. And it could become a role model for future disaster mitigation in the country.

A forewarned state government did not shy away this time from seeking all possible help from the Centre and carried out a mass evacuation programme. Chief Minister Naveen Patnaik personally called up Prime Minister Manmohan Singh as well as the Defence Minister to press the importance of the matter.

In 1999, when the super cyclone struck, then chief minister Giridhar Gamang was consulting his astrologers, who reportedly assured him that Cyclone O5B would split into two and fly over Orissa. Officials could not convince people in Jagatsinghpur that tidal surges could kill them. When the cyclone struck finally, there was no electricity even in the state secretariat as no one had thought of arranging a generator.

It was only after the scale of the devastation became clear that the Gamang government requested the Centre to send in armed forces and to seek "immediate release" of Rs 500 crore for rescue and relief.

This time, more than 72 hours before Phailin reached the coast, the state had initiated preparations for its arrival — evacuating people from coastal districts, mobilising officials and setting up temporary relief camps. Evacuation of 9,12,848 people was achieved in time, despite only 48 hours of notice being available for the precise location of the storm's landfall.

The state government pushed all available legislators to oversee work in their constituencies and government officials were told to work extra shifts despite it being festive season. With the ground well covered, the state is confident that within 24 hours, power will be restored in the affected parts and by 48 hours all roads will be cleared.

As things stand, 15 districts have been hit, including 14,514 villages. No major physical casualty has taken place and the damage has basically been to communications.

By mid-morning Sunday, the state government had conveyed that it would not be requiring the services of thousands of personnel who had been put on standby and hundreds who had been rushed in.

Defending its turf in the face of foreign 'experts' who predicted, varyingly, total annihilation to gentle winds, a well-equipped and confident India Meteorological Department (IMD) managed to not only get the scale of the natural event correct but was also as accurate as possible in the location of where the storm would hit the coast.

In 1999, the IMD had four long days to track and warn about the cyclone approaching Orissa. Lacking modern technology, there were only two days of warning that a simple cyclone originating from the Malay peninsula had picked up speed in the Bay of Bengal to emerge as a super cyclone.

This time, it stuck to its stand that it wasn't a super cyclone, contrary to proclamations by global experts. Director General, Meteorology, L S Rathore, in fact, rubbished the panic over Phailin, asking reporters to trust the IMD's expertise. Rathore's confidence was not ill-founded. Unlike 1999, the IMD of 2013 has an arsenal of sophisticated equipment, acquired over the 11th Plan period, plus the information gleaned through India's remote sensing satellites.

Rathore Sunday said that the accuracy in predicting the strength and nature of Phailin came from several measures taken over the past few years. "We have been improving our observation system. The development of human resources has also helped," he said, adding that the creation of a separate Ministry of Earth Sciences was crucial as this led to better interaction and transfer of operational systems.

Learning its lessons from the Uttarakhand tragedy, it lost no time in mass mobilisation of the three armed forces. It deployed nearly 2,500 National Disaster Relief Force (NDRF) personnel. Out of this, 29 teams were deployed in Orissa, 19 in Andhra Pradesh and 7 in West Bengal. To accommodate those affected, 250 cyclone shelters were set up.

A day after the cyclone made landfall, the Centre acknowledged that casualties had been minimised due to advance and timely warnings from the IMD, early evacuation and the preparedness of disaster management authorities. The monitoring and coordination system activated after the recent Uttarakhand flash floods was put to test during Phailin and so far had made good progress in containing the cyclone and its aftermath, officials said.

The NDMA (National Disaster Management Authority) reported receiving nearly 400 calls at the NDRF Control Room in Delhi, seeking cyclone-related information. NDMA officials said around 100 persons were still stranded in Andhra Pradesh and Orissa, and NDRF personnel were on their way to rescue them.

As per preliminary reports, the NDRF, using sophisticated tree-cutting equipment, has cleared the 15-km Konark-Puri road.

A DIG from the NDRF is stationed at Bhubaneswar to coordinate rescue and relief work in both the states. Over the past three days, the NDMA, which works under the Ministry of Home Affairs, tied up with Andhra Pradesh and Orissa to set up a 24-hour control room. Also on the standby is a 30-member quick response medical team, including personnel from Central government hospitals and the CGHS (Central Government Health Scheme).

The Ministry of Health and Family Welfare has set up 10 teams of public health professionals to counter the chance of epidemics, as well as a team of psychological experts.

Defence Ministry personnel were also pressed into service, but eventually did not have to be used as most of the people were evacuated in time. The Army, Air Force and Navy columns are now helping the state government restore transportation and communication facilities. More than 55 Army colums will continue to remain on high alert due to floods expected in parts of Chhattisgarh, Jharkhand and Bihar in the next 48 hours.

Large assets of the three Services and Coast Guard will also remain on standby. The Air Force has allocated 30 helicopters and 13 transport aircraft, including the two recently acquired Hercules. The Navy has kept its large warships ready at Visakhapatnam, with rations for 10,000 persons, potable water and medical teams. The Coast Guard has 15 of its ships on alert at Kakinada, Paradip and Visakhapatnam — their helicopters and fixed-wing aircraft have already commenced patrolling the coast. On Sunday evening, they rescued 19 Chinese and one Indonesian crewmen of the sunken Panamanian ship MV Bingo.

Posted by Rajan Alexander at 8:35 AM