Cyclcone Phailin: Once in a lifetime, rare Category 5 Landfall to be expected? 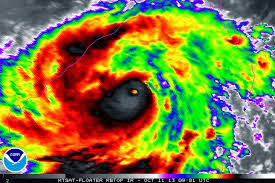 U.S. meteorologists said this is a storm that is flirting with historic sized power.

"If it's not a record it's really, really close," University of Miami hurricane researcher Brian McNoldy told The Associated Press. "You really don't get storms stronger than this anywhere in the world ever. This is the top of the barrel."

To compare to killer U.S. storms, McNoldy said Phailin is near the size of 2005's Hurricane Katrina, which killed 1,200 people, but with the much stronger wind power of 1992's Hurricane Andrew, which was a Category 5 storm at landfall in Miami.

The storm shows no sign of weakening and has an impressive eye, said Ryan Maue of the private weather firm Weather Bell. He called it a

which he said in that region has a history of being catastrophic.

If the storm continues on its current path without weakening, it is expected to cause large-scale power and communications outages and shut down road and rail links, officials said. There would also be extensive damage to crops.

Satellite images of the storm showed its spinning tails reaching nearly 1,600 kilometres (1,000 miles) from the east coast of India to the west coast of Myanmar, an area roughly the size of France.

Posted by Rajan Alexander at 10:29 AM