Say Goodbye to the sun for 5 months. Blizzards, sleet and frost for this weekend as Britain set to be colder than Moscow! 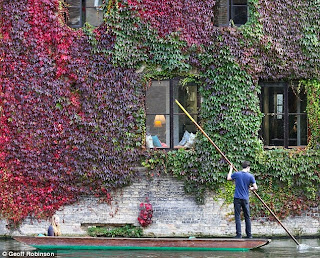 (DailyMail) The Indian Summer is set to come to an abrupt end this weekend as blizzards, sleet and frost hit parts of Britain. In Scotland temperatures in some areas will dip as low as two degrees while much of the country will see the mercury dip below five.

The plummeting temperatures, which in some areas will be colder than Russia's St Petersburg, bring the risk of widespread frost on Thursday night.

As recently as Sunday, sun worshippers were making the most of the weather by relaxing in local parks. The Met Office said the shift in weather will be caused by southern European breezes meeting gales in the north, causing temperatures to plummet. Met Office spokesperson Nicky Maxey said:

"The warm air moving up from the continent that has been keeping temperatures high will turn around to come from the cold north. It is not an extreme switch in the other direction but you will feel it more in exposed areas. We are going to see temperatures falling, so by Thursday it will be 12 or 13 degrees in the South, which is a good six or seven degrees below what we had on Monday.

There is a risk of frost on Thursday night going into Friday across the country. We are looking at a minimum of three or four degrees, even in the South, but more likely on the western side, so it's going to be feeling rather chilly.

The Autumnal weather will bring wind and rain in from the north tonight, to  Scotland and parts of the North East. Ms Maxey said:

'Heavy showers and rain will be moving south eastwards across the Northern Isles and north east Scotland tomorrow. Some showers could become heavy and blustery in Scotland with hail and the risk of thunder.

These showers will extend south as far as Norfolk. We could be seeing winds of up to 50 knots, or 57 miles per hour, with wintry showers in Scotland, with a risk of blizzards on higher ground above 500 metres in the Highlands and you may see sleet on the Grampians. Scotland and the East Coast will have the risk of gales buffeting many in Scotland tomorrow, but these will move further afield on Thursday. 'It will be showery and windy to the east but the further west you go the better it will be on Thursday.'

Posted by Rajan Alexander at 11:25 PM